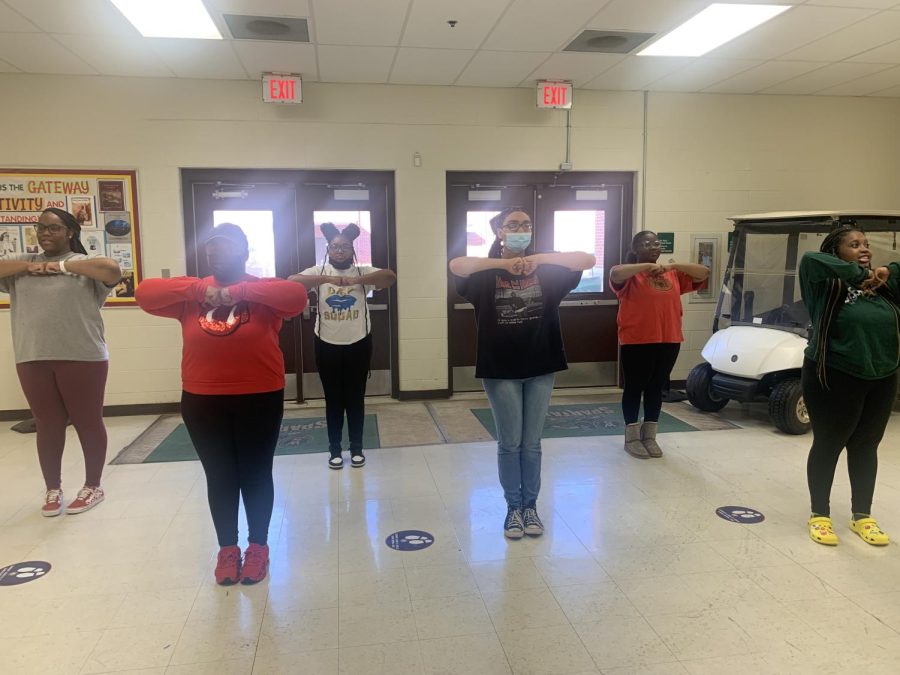 Unity. For Kaydence Jones (9), the step team is another form of unity. Unity in movement, in magnetic energy and in mindset. Co-captain Maya Watt (12) has been dancing since she was four and stepping for around six years. She already had friends on the team, but she was especially motivated to join after watching them perform during a pep rally. Now, she has the inside perspective.

“During the performance, it’s all hype. You have everybody looking at you, cheering,” Watt said. “Other than that, it’s just really trying to support each other – really just trying to stay on one accord while also getting your energy up.”

Although the team’s performance is thoroughly enjoyed during pep rallies, continuous support for the team falls short. Several team members believe the team and its performances deserve more acknowledgment.

“We are one of people’s favorite parts of the pep rally, but most people in the building don’t really view us in a light that they see other teams [in],” Watt said.

This year, the team especially felt unappreciated by the school in their search for a sponsor, without whom the club would not exist. Watt and her co-captain, Kennedy Holmes (12), were especially exasperated that they might not receive the chance to lead the team for the first time.

“…Finding a sponsor was really, really difficult,” Watt said. “We asked so many teachers and got so many ‘no’s’. Trying to find someone who really wanted to take this step with us [was hard]. With us being new and really trying to build a brand new team from scratch, it was really difficult at first, but it’s been fun.”

Now, with English teacher Alberta Coats as their sponsor, the team is working hard to prepare for the potential upcoming spirit event. Practices occur two times a week from 2:30 p.m. to 4 p.m., adjusting to 2 p.m. to 5 p.m. during the week of a performance. They normally begin with conditioning, such as running and cardio workouts. Next, the captains teach the current dance, which is then reviewed and refined for the remainder of practice.

“We’re able to work on things other than step, like stamina and performance and just sharpening our skills,” Jones said.

Jones has been stepping since seventh grade. Many of her family members are in the Divine Nine,a council composed of historically African American sororities and fraternities also known as the National Pan-Hellenic Council. So, Jones grew up watching step shows and hearing about her family’s personal experiences. This season, she is focused on improving her performance and bonding with the team. The team maintains a close relationship that allows them to work well together. The team provides an outlet for artistic expression, as well as a way to spend time with friends.

“The team is really nice,” Kaylen Stafford (9) said. “We’re really playful and we act like a small family.”

As a new member on the team, Stafford finds the environment calm and comfortable. The close relationships on the team allow members to collaborate well and feed off each other’s energy, which calms everyone’s nerves approaching a performance. Overall, the members are excited and anxious to perform for the first time this year.