Experiences of a woman in high school wrestling 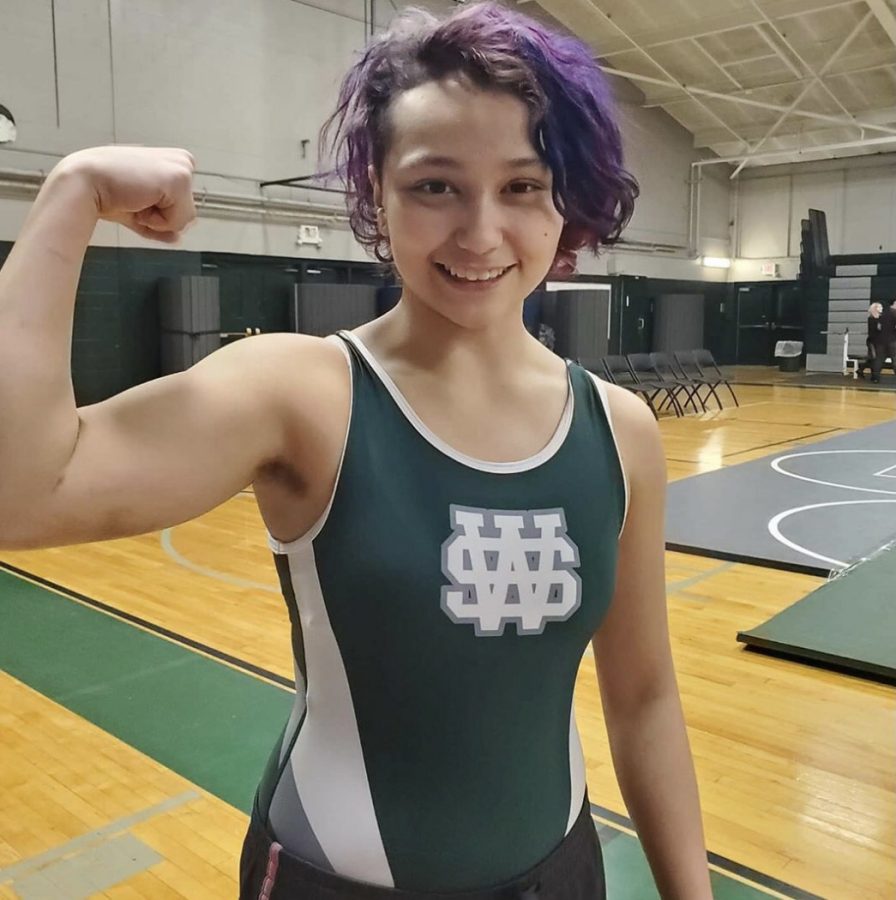 Even at a fleeting glance, wrestling is an incredibly tough sport that will “break you;” however, Nadia Sommerville (11) breaks people’s expectations of her by holding her ground around men in their most aggressive state.

“[I am told] that I’m just short or I’m super tiny in a demeaning way,” Sommerville said. “[Boys] pick on me knowing that I can’t do much unless we’re out on the mat. It sucks so much.”

Sommerville has strived to succeed in such a brute sport. While challenges surrounding the physical aspect of the sport are to be expected, her encounters with gender discrimination have been a major obstacle in her high school wrestling career.

“[I get] a lot of fetishization or misogynistic comments … or a startled look of surprise is what I typically get when I tell, especially older men, that I wrestle,” Sommerville said. “People look at me and tell me I’m intimidating.”

Despite all of these comments, she says that her passion for the sport over three years and a chance to inspire others fuel her drive to succeed in this sport. But still, her opportunities to prove herself are fleeting. In a male-dominated sport, finding a girl among teams is rare, limiting Sommerville in her opportunities to wrestle because matches are set up by gender.  However, she still cherishes the ones she receives with great passion.

In tournament matches, she is only able to take on other girls, but she is very eager to take on any guy during practice. She has earned her place in the Spartan Wrestling Club as a great team captain.

“As team captain, I have a responsibility to be an example for other people,” Sommerville said.“… I will beat anybody. Even if they are heavier than me, I will go all the way at it. And I will take you to the wall.”

Wrestling demands a great amount of determination and grit. Some people do not equate these attributes with women, but Sommerville steps onto the mat to change narrow mindsets.

“I go more out of my way to prove this wrong about women not wrestling,” Sommerville said.

Sommerville believes men should have the space to get emotional without being criticized and encourages people to look past the stereotype of women’s and men’s emotions, especially when it comes to sports.

“There are times when I have seen grown men cry because of how hard they’re working and how frustrated we’re getting,” Sommerville said. “I have seen both of my coaches cry at least once, and they’re adult men.”

Sommerville is a prime example of forcing your way to the top no matter the situation and directing negativity towards growth. She feels that this message can be applied to all women cautious about venturing into something dominated by men and anyone else going into a unfamiliar environment.

“Coach Roberts always says the best wrestlers are the wrestlers that when they get stopped by a brick wall, they will continue through that brick wall till it breaks,” Sommerville said. “[Wrestling] is a sport that will break you … It is a sport that I 100 percent recommend to anybody who wants to try it, men, women [anyone] in between.”