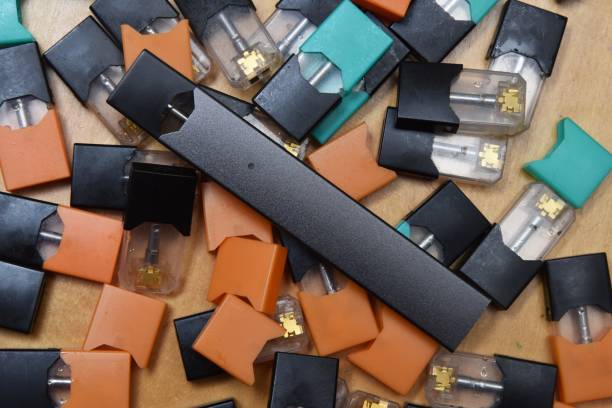 JUUL e-cigarettes have high levels of nicotine with one pod containing as much nicotine as 20 cigarettes. EVALI is a serious, sometimes fatal, lung disease caused by vaping, and thousands of cases have been reported.

With teens sick, hospitalized and dead, the vaping epidemic has reached its peak, threatening to hook students on nicotine. At White Station, vaping is not something to overlook. Administration has set strict rules to combat vaping, but as students fuel their addictions, the crisis only worsens.

“Vaping is a new source [of addiction], and it seems to be easy for people to get vapes and whatever they put in vapes,” counselor Leslie Fleming said. “I think we don’t know enough about it, but I know there’s nothing about it that’s healthy.”

E-cigarettes were introduced to the market in 2003, targeting adult smokers looking for an alternative to traditional cigarettes. However, companies such as JUUL Labs marketed their products toward impressionable teens with a variety of flavors and colors, falsely advertising vapes as safer than traditional tobacco.

“We don’t really know the health impact,” Principal Carrye Holland said. “Vaping hasn’t been around all that long, so we don’t know the long-term impact. It might take five to 10 years, but by that time, it’s too late; you’ve already done damage to your body.”

Because the brains of young adults are not fully developed, teens are especially sensitive to the addictive effects of nicotine or cannabinoids, compounds found in cannabis, in vape pens. Not only can it affect brain development, but many teens are unaware of the hazards of vaping, enjoying the fruity flavors that mask the nicotine, lead and cancer-causing chemicals within the school environment.

“We see a lot of students use vaping as a coping mechanism, usually for stress,” Holland said. “Students are going in the bathrooms and [vaping] or doing it right in the classroom. We don’t know if that’s showing the level of addiction where they have to have that in their bloodstream.”

In an effort to curb the number of young users, White Station students can expect more than simply a warning if found with a vape on campus including in a locker, backpack or car. The penalty is categorized as tobacco or alcohol use, resulting in a parent conference and an out-of-school suspension. Many parents are oblivious to the massive amounts of teens vaping, so the administration has prioritized parental education in their forms of prevention and intervention.

“We’re trying to help parents know what’s going on, know what [vapes] look like, and then it’s the office that deals with it,” Holland said. “You’re using something that’s not designed for people under 18; it’s not legal.”

Under Tenn. e-cigarette restrictions, the distribution, purchase or possession of vapor products is illegal for anyone under the age of 21. However, teens are finding loopholes, whether they are lying about their age, obtaining vapes from someone else or ordering online.

“Some students are purchasing [vaping products] and providing [them] to others,” Holland said. “That goes into a whole thing with liability. If you provide something to someone and that gets them sick, you could be held accountable for it.”

In some cases, security guards and secretaries discover students vaping through bathroom checks and camera footage. Despite those measures, metal detectors and backpack checks, administration is still struggling to stop students from vaping.

“I think a big part [to stop the vaping crisis] is helping students figure out what’s making them do it,” Holland said. “Spending that level of money, feeding that addiction, the health risks, the consequences — there’s got to be a better way to cope and manage stress.”

A crucial step in preventing and stopping teen vaping is educating students on the possible negative side effects and persuading them to quit.

“Be aware that it is dangerous,” Fleming said. “Just know what you’re putting in your body. We don’t know the long-term effects of vaping, so encouraging others to stop is important.”

Without definite answers to what vaping does to the body, the unknown could simply replicate the timeline of cigarettes. In the mid-twentieth century, when smoking was glamorous, the dangers of cigarettes were unknown to the public, and now, the repercussions are clearly visible.

“My grandmother died of lung cancer,” Holland said. “She died a horrible, horrible death, and back then they didn’t have the warnings on cigarettes. If kids nowadays know that it could really hurt them, I’d like them to make better decisions and not regret it later.”