Superman comes out and saves the world in ‘Superman: Son of Kal-El’ 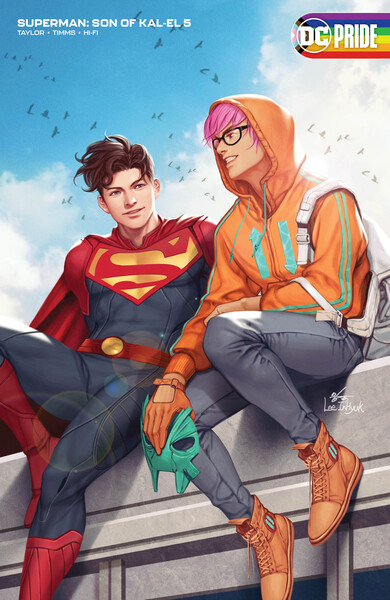 In the variant cover for “Superman: Son of Kal-El” #5, Jon Kent (left) glances toward Jay Nakamura (right) as the two share a moment alone on a rooftop. Kent saved the life of budding activist and journalist Nakamura during an attempted college campus shooting, which initiated the friendship and eventual romance between the pair.

A forest fire rampaging. A college campus shooting. A refugee boat sinking. Superman averts all of these crises and more in a matter of hours, only he is not the Kryptonian Kal-El. This half-human, half-Kryptonian Superman was born to award-winning journalist Lois Lane and intergalactic hero Clark Kent. He goes by the name of Jon Kent and demonstrates profound empathy, bravery and strength in the series “Superman: Son of Kal-El.” Despite his superpowers and fierce commitment to the ideals of his father, the most highlighted feature of Jon Kent has been his sexuality.

DC Comics spent months promoting the comic before its release and prematurely revealed that Jon Kent would blossom a relationship with new character Jay Nakamura. This confirmation that the son of Clark Kent is bisexual garnered a multitude of reactions and attention — both positive and negative — because of the unprecedented approach with the character.

“[When I found out he was bisexual], I thought ‘wow, that’s nice … it’s just his sexuality; it’s not that big of a deal,’” Charity Osedo (12) said. “He’s still a superhero; he’s still Jon Kent, so there’s not really that much of a difference with him. His sexuality doesn’t change who he is.”

Jon Kent appeals to young readers because he was written as a young adult with valid emotions who questions his purpose and identity. He serves as a role model for those who are not typically represented enough in mainstream media.

“I’m bisexual myself, and I think [Jon Kent coming out is] awesome,” Brady Causey (11) said. “Bisexual people are very real, and bisexual men are very real. I feel like … bisexuality is usually represented by oversexualized girls … it’s nice to see a bit of myself in a popular superhero.”

While some critics consider the reveal of Jon Kent’s sexuality as poorly timed and unnecessary, the writer of the series claims that there is no better time than now to release an iteration of the character that delves beyond the previously set expectations of Superman.

“Writing Superman has been my dream since forever, but if I was doing that, I needed to work out why,” Tom Taylor, writer of “Superman: Son of Kal-El,” said in an interview with DC Comics. “What I came to realize was there wasn’t a point in having another straight, white savior come in and be Superman. There had to be something — more people that he represented, and I think Jon finding himself … is really important to a lot of people.”

“Superman: Son of Kal-El” focuses on modern-day corruption as Jon Kent goes head-to-head against the all-powerful, morally-depraved dictator of the country Gamorra, Henry Bendix. Without guidance from his father who has left Earth indefinitely, he strikes out on his own and receives crucial support and knowledge from Nakamura to aid in his conquest against Bendix. Some readers have condemned this adaptation of Superman because it strays from the traditional portrayal of the character. Others find traditions fleeting and not worth feeling distressed over.

“I’m all for inclusion and representation,” Jason Prince, owner of The Cellar Tabletop Games & Comics, said. “Traditional values only go back as far as the people living support those traditions … so as far as traditional culture goes, that changes all the time. The people who are upset don’t actually care that it is not the same character — it’s a character called Superman. That’s all that they care about, and they want to be upset.”

Regardless of how fans or irritated readers interpret the comic series, “Superman: Son of Kal-El” has cemented its importance in how marginalized audiences can look to the characters as proof that they are not alone in their struggles.

“Being able to look up at the silver screen or even just a comic book and being like ‘wow, they are like me, and I can be like them,’ … is important to see that you can be capable of these grand acts,” Causey said.