The Rookers take on Gibson’s 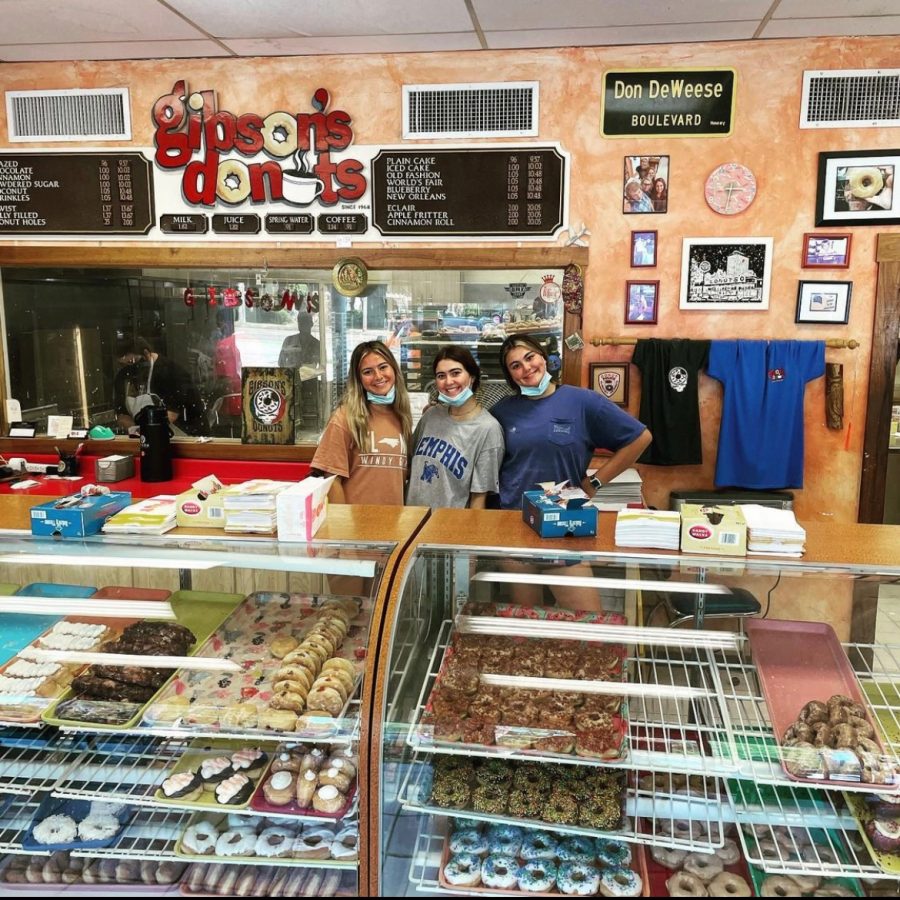 After an eventful morning preparing for the workday, Addison, Avery and Anna (left to right) smile for the camera. Gibson’s brings fond memories for the Rookers, as well as many funny stories.

It’s 6 a.m. on a quiet, picturesque Saturday morning. The sun is only beginning its morning ascend, and the smell of donuts fills the air as Anna Rooker (12), Addison Rooker (10) and White Station Alumna Avery Rooker start the day at Gibson’s Donuts.

First opened in 1967, Gibson’s Donuts is stationed in the heart of Memphis and of the Rooker family. Like many other Memphians, each sister has created fond memories at the shop and would not trade it for the world.

“I have been going to Gibson’s ever since I was 1 year old with my parents who’ve always lived in Memphis,” Avery Rooker said. “So, I’ve known about Gibson’s since the day I was born. It’s really fun to go work at a place that I used to dine in when I was a kid.”

Anna Rooker was the first of the sisters to apply for a job at Gibson’s due to the shared love of the place from a young age. She enjoys every aspect of her job and eventually persuaded her sisters to join in on the fun.

“[Anna] always had such a good experience,” Addison Rooker said. “She would always tell us how great the atmosphere and the workers were and how the boss treated his employees well. I think that really pushed us to want to work there even more.”

The welcoming environment of Gibson’s is what attracted the Rooker sisters when applying and ultimately became one of their favorite parts of their work experience.

“The community is very tight-knit. [The employees] work well together, which is how Gibson’s runs so smoothly,” Avery Rooker said. “We get hundreds of people throughout the day. People can stand in the back of the line and be at the front of the line in five minutes. The efficiency is amazing. Even when we are understaffed, the efficiency is still present.”

Handling the immense number of customers demands that the employees have a good connection, which comes naturally to the Rooker sisters.

“My siblings and I have a really good relationship,” Addison Rooker said. “So, it was never a problem [to work together]. Obviously, there are some mornings when it’s early, and we butt heads, but it’s never become a real issue. I prefer working with them.”

As in every sibling relationship, frustrations can arise. To outside viewers, the occasional squabbles may seem intense. However, the Rooker sisters have a mutual agreement whenever these issues come about.

“A lot of people don’t understand the bickering that we have,” Anna Rooker said. “We could be arguing so badly and ten minutes later, we will be perfectly fine. Sometimes, people will try to get in the middle of it and try to stop the fight, but we explain that we will be fine after we cool down in a few minutes. It’s a part of being sisters.”

Despite the daily ups and downs, from 6 a.m. to 5 p.m, the sisters have a routine they follow.

“Whether I am working in the front or back, the first thing I do is grab a chocolate milk and a cinnamon donut,” Avery Rooker said. “When I’m working in the back, we will fill all of the donuts and the eclairs. Then, we will place the pastries on the trays to be set out in the front. There is also a huge order board for people that placed orders ahead of time, and so there is someone working on that as well. We all keep the flow of things and make sure the customers and employees have everything that they need.”

Though some days may seem mundane, it is never truly a boring day at Gibson’s. Over the past months, the Rooker sisters have collected numerous stories.

“One time, my manager Zach spilled an entire thing of glaze on the floor, and it went absolutely everywhere,” Anna Rooker said. “We have security cameras, so when anyone falls or spills something, we always go back and rewatch the clips from throughout the day.”

Working at Gibson’s allowed the sisters to become closer and bond as a family. Though they are all growing and will eventually go their separate ways, Gibson’s will always be there to remind them of their youth and bring them back together.

“Working at Gibson’s has brought [my sisters and me] closer since I’ve moved out,” Avery Rooker said. “Mainly because after work, they come to my house to hang out. We tend to do a lot more things together and know a lot of the same people. This is a major advantage of working together, and I am so thankful for it.”