It’s time for revenge, not sleep 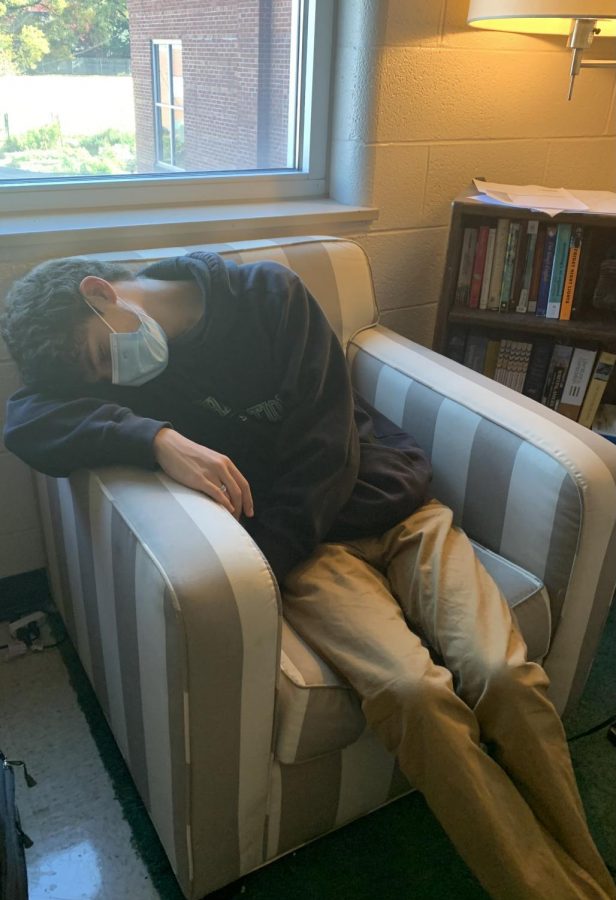 Collapsed on a comfy chair, Andy Blumberg (11) takes a quick nap in the middle of his day. Many students relate to the exhaustion from working late and getting little sleep: a phenomenon called revenge bedtime procrastination.

It is 1 a.m. and after hours of homework, it is finally time to get some rest. Or is it? Instead of going to bed, many choose a lifestyle of dark under eye circles and caffeine, delaying sleep for some much needed leisure time. However, this behavior has a name — revenge bedtime procrastination  — and it has effects reaching many aspects of both students’ and teachers’ lives.

“[Revenge bedtime procrastination is] when a person decides to keep working late into the night without any incentive for if it’s important for their job or school,” Raksha Visvanathan (10) said. “It’s more for leisure, more for an escape.”

While many intend to take time back for themselves at the end of a long day of work, what they are really doing is disrupting their sleep schedules and only inconveniencing themselves the next day. These habits, however, seem not only to have become a behavior for self-relief but a lifestyle fueled by pressure from peers and a stack of unfinished homework.

“Some people have awful habits,” Serena Shan (10) said. “They will pull two consecutive all-nighters, which is detrimental for your health … [but] I think a lot of people now see it as a competition to see who stays up the latest … and gets the most done in one night, when in reality, you should space it out.”

What revenge bedtime procrastination actually does to one’s health may be surprising: just losing a few hours of sleep can affect how the body functions, and it only gets worse as this behavior progresses.

“When you mess up your sleep cycles, and you mess up your patterns, and you do that for a long time, then the punishment that your body takes is compounded by that loss,” sociology and anatomy and physiology teacher Rachel Kannady said. “It also means that your immune system can’t function as well; it means that if you’re trying to do something physically … that’s gonna be harder … If you don’t get enough sleep, you can’t get it all done.”

One reason students claim that they stay up late into the night is the constant build-up of work that forces them to go to extreme measures, continuously pushing back their bedtime. Many can sympathize with gulping a late-night coffee just to stay awake to finish one out of 10 homework grades that make up only 10 percent of their grade.

Even though homework may cause students to work into late hours of the night, the procrastination of their bedtime — or assignments in general — is still a student’s choice, which can easily become a pattern, a cycle of broken sleep.

“It just gives me a really negative outlook on the next day because I feel really upset at myself,” Shan said. “When I’m more upset, you know, I’m more prone to scrolling on my phone, so it’s a huge cycle, and eventually I’ll start staying up later and later and later until like [1 a.m.] when normally I would go to bed at 9 [p.m.].”

Whether it is connecting with someone over a lack of rest, or breaking away from the constant wave of people to enjoy the stillness of the night, revenge bedtime procrastination, while far from recommended, can still have its benefits.

“With my own personal experience, there was this sense of solitude and calmness when the lights were all turned off and my light was the only one on, and I could almost do whatever I want,” Visvanathan said. “Being alone was my favorite thing, I had all the options laid out in front of me, and I could pick. It just felt really good to have that control.”

The decision ultimately remains in the hands of students; for some, revenge bedtime procrastination works well and gives them necessary leisure time during the only time they can get it — as long as it is not done in excess. For others, however, procrastinating sleep becomes even more deadly than procrastinating homework, and their bodies feel the effects over an extended period of time. What it comes down to is what makes an individual the happiest and how their time can be used most productively.

“Just try to do things that make you happy,” Visvanathan said. “Hang out with your friends; don’t do something if the only thing you think you’re gonna get out of it is more work or [just to] look impressive. Do something that as an added benefit you genuinely think you’re going to enjoy because that will get the most out of something and also you won’t see it as a chore anymore.”