Being part of the LGBTQ+ community as a teen 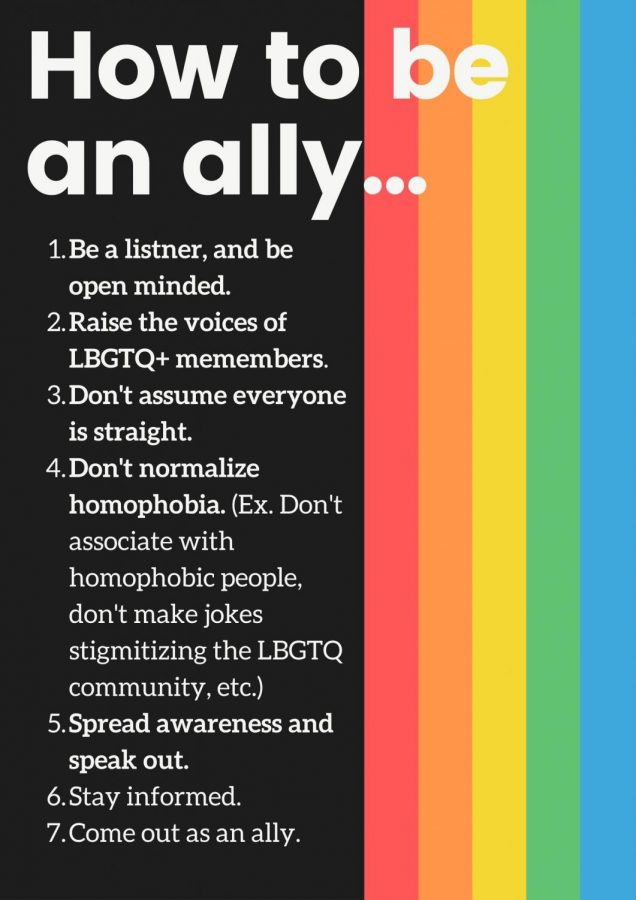 According to Next Avenue, an “ally” is someone who supports LGBTQ people and equality in its many forms — both publicly and privately. It is essential for heterosexual, cisgender people to not only support the community, but be a proud and public ally.

It’s everywhere, creeping in every corner. It’s in our neighborhoods, haunting us. It’s in our schools, terrorizing us. It can even be in places of worship, misinforming us. It’s unavoidable. Prejudice against the LGBTQ+ community is alive and thriving. What most people don’t know is that homophobia and transphobia are detrimental to everyone in society, not just the LGBTQ+ community.

Coming out as straight or cisgender is unheard of. That in itself is proof of the homophobia embedded in today’s society. Why is it that people are straight until proven LQBTQ+?

“Although it doesn’t seem harmful directly, what hurts a lot indirectly is making everything so heteronormative and implying that that is the default, and that is how it should be and implying that being anything except that is unnatural or something other than the norm,” Anthony Bruce (12), who identifies as gay, said.

Only seeing heterosexual relationships in media is just one of the many examples of how people are taught that being straight and cisgender is the norm.

“Growing up, there was a lot of [homophobic] messages that were put into my brain like, ‘You can’t do this. You can’t do that. This is weird. Don’t do that,’” Paxson Abney (9), who identifies as pansexual, said. “I feel like there’s a lot of stuff that’s implanted into you as a child, and sometimes you don’t grow out of.”

Heteronormativity, or the concept that being heterosexual is the standard for sexuality, affects everyone. Strict gender roles lead to toxic masculinity, the need for a male to appear “manly” to feel accepted, which affects how LGBTQ+ people are viewed.

“I think that toxic masculinity is responsible for homophobia, not the other way around,” Luke Hatler (10), who considers himself an ally to the LGBTQ+ community, said. “Homophobia is one of the many, many symptoms of toxic masculinity, which is the real disease we’re treating.”

Even in communities where being LGBTQ+ has been normalized, members can often be seen only as their sexuality, placing restrictions on their value as individuals rather than part of a marginalized group

“There’s a really bad habit of people wanting to use gay men as accessories or as like the whole gay best friend thing, so it is negative in a way that some people view you as your sexuality when there is really a lot more about a person,” Bruce said.

Being raised in a heteronormative society makes simply being open about sexuality much more strenuous than it should be. Bruce is just one of the many teens in America that face threats because of how they identify.

“In high school, it is a lot less noticeable, but definitely in middle school, there was a lot of different treatment in a negative way,” Bruce said. “I got bullied a lot in middle school — lots of threats of physical violence, lots of, by my peers, just a generally not good response.”

Although Bruce went through the emotional toll of bullying, he is still considered “fortunate” for being physically unharmed. According to UCLA’s school of law, LGBTQ+ members are four times more likely to experience violent victimization than non-LGBTQ+ members.

“You never know what you could say to someone to lead them to being all weirded out or even violent maybe,” Abney said. “I have not had any experiences like that, but I have met other people who have.

At some point, it’s like stepping on glass, and you have to be really careful with what you say or do.”

Many students at White Station have felt comfortable coming out because of the supportive students and faculty and organizations like the Gender and Sexuality Alliance club.

“I feel like there’s a lot of people at White Station that are LGBTQ+, and so I feel like there’s always going to be someone that’s not going to like it or accept it or be cool with it, but overall, most people do not have a problem with it or at least those that I have met,” Abney said.

To some, religious organizations have gained a poor reputation because of the misleading interpretation and enforcement of scriptures that ostracize and demean people who are not heterosexual and cisgender.

“I am kind of cynical when it comes to organized religion, especially like private schools and religious schools,” Hatler said. “I think that it’s just inevitable that that kind of bigotry exists especially, in such an organized way that [some religious institutions do] where they systematically discriminate against LGBTQ people. But, I also think the people who already have homophobic views can use religion to shield themselves from blowback.”

When religion may be used to hide homophobia and transphobia, having straight and cisgender allies is exponentially more important for the LGBTQ+ community.

“In this country, [LGBTQ+ members] are kind of seen as lesser than, and they don’t always — especially trans people — have access to the same rights,” Hatler said. “They don’t have access to the same things to make them safer; they are a lot more likely to commit suicide and also a lot more likely to be hate-crimed. It is hard to be LGBTQ in this country, so it is important to be there because someone needs to be there.”

Allies have certain obligations to support the community that include supporting LGBTQ+ members, disassociating with homophobia and transphobia and spreading accurate information.

“I think what it means to be an ally is more of lifting up people of the LGBTQ community, lifting their voices up and make them be heard … because a lot of people are going to not listen to people that are LGBTQ, so we really need more cis[gender] and straight people spreading that information so more people actually start listening,” Bruce said.

Allyship is more than being there for others, it’s about creating a safe environment for everyone.