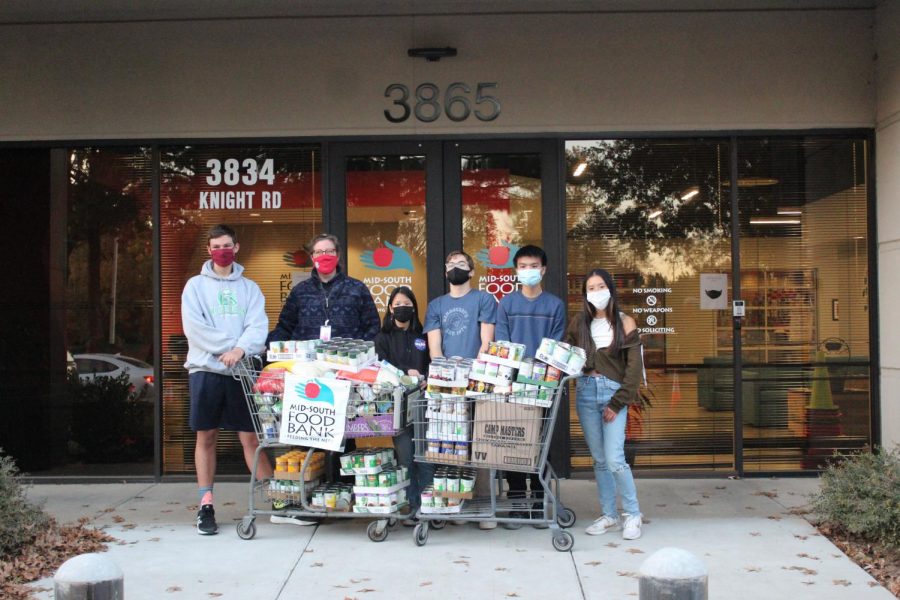 Towers of canned corn, green beans and sweet potatoes can only mean one thing: it is time for the annual Thanksgiving food drive. At White Station, the JROTC program manages this Thanksgiving canned food drive every year, some years collaborating with other organizations. This year, the White Station’s JROTC and Key Club have partnered to carry out this drive and all of the planning that comes with it. JROTC, committed to teaching the values of citizenship and leadership, normally takes the reins in drives such as this one. A new addition to White Station, though, is Key Club, which upholds the promise of providing service to the community, making this food drive a perfect opportunity for the club’s members. Shivani Menon (10), an S-6 in JROTC and the underclassmen vice president for Key Club, commanded the drive this year.

“I think of Thanksgiving as just one of the times of the year that people come together [with] family and just be thankful. The meaning is being thankful for what you have,” Menon said.

For this reason, she organized the drive with the Key Club leadership from creating posters to distributing boxes to almost 130 teachers. Key Club and JROTC members collaborated in getting boxes to teachers, spreading the word about the drive, collecting and storing cans, and most importantly, delivering the cans to the Mid-South Food Bank.

“It’s an annual tradition; we’ve always done it. This means that others can enjoy this time, others that don’t have money to purchase a lot of food,” Menon said.

However, the drive wasn’t all smooth sailing. One Key Club member participating in the drive, Charlotte Miller (10), found herself wishing student participation was higher. She also noted more issues arose with can collection.

“It’s been really difficult trying to get donations during school — during SEL [or Social Emotional Learning] time or study halls. A lot of students don’t have that opportunity because their teachers don’t let them go. So, it’s been hard to collect donations,” Miller said.

To combat these issues, Key Club members advertised the drive by hanging up banners in school hallways and asked some teachers for assistance. .

“A thing that I think our generation kinda forgets is the gratefulness [for] what we have; it just [happens] naturally. So, we have ways to encourage students,” Menon said.

One of these ways included giving extra credit opportunities to those who brought in canned or boxed goods for the drive. More ideas were brought to the table on how to incentivize bringing in cans; for example, giving a prize to the student who brought in the most food.

“Students of certain teachers were offered assignments related to the drive to complete, or they were incentivized by extra credit and the idea of helping other people,” Menon said.

At the end of the day, the giving and community aspect of the drive was the most rewarding to Key Club and JROTC members. Therefore, Ava Guazzo (10), a member of JROTC serving as the S-6 assistant, tried to help with the drive wherever possible.

“To me, Thanksgiving means reflecting on what you’re thankful for. Also, [reflecting on] what you can do for others so other people can be thankful,” Guazzo said.

By the end of the drive, White Station’s Key Club and JROTC program collected over 1000 canned goods including canned potatoes, yams, spinach, green beans and many other non-Thanksgiving related foods. All of the cans were delivered to the Mid-South Food Bank to help out some families in need, but the impact of the organizations will not end there.

“We can also have many more [drives]; we could make this a tradition. And it makes the students feel good to know that they helped out,” Miller said.