Cheerleaders: on the field and on the mat 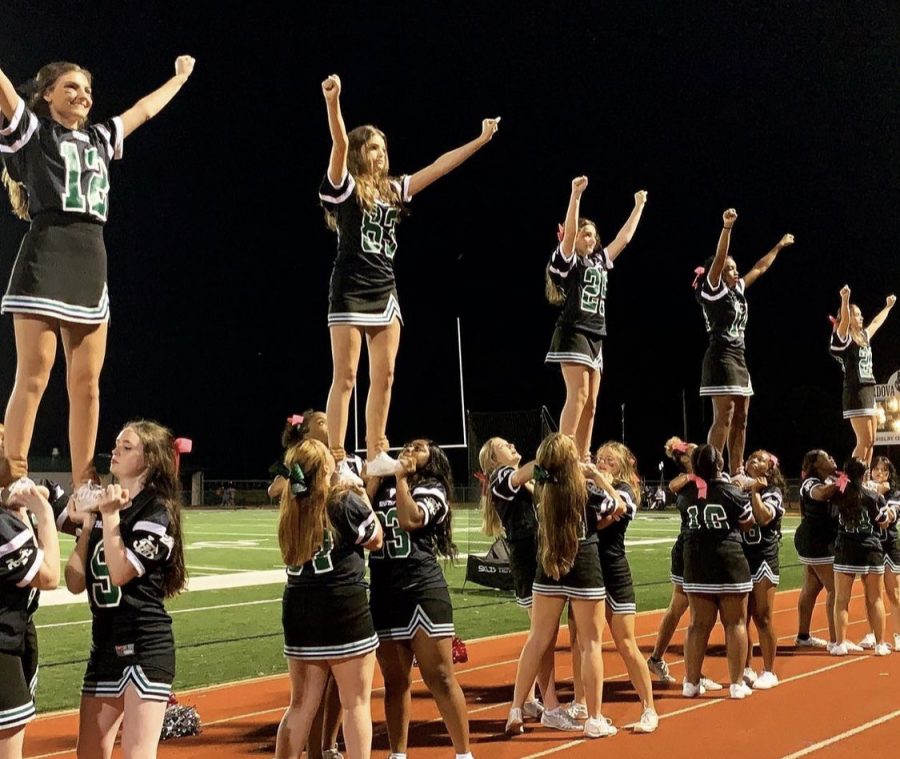 Cheerleaders stunt during a football game. Oftentimes, students watch dances and chants on the sidelines, but are unaware of the difficult stunts that are a large part of the separate competitions cheerleaders partake in.

Pom-poms in hand, lined up in neat rows on the side of the field, cheering on the football team; this image immediately comes to mind when one hears the word cheerleader. However, football cheer is only a small part of what the cheer team does. Abby Kellett (12) has been cheering since the beginning of middle school and emphasizes that cheer requires a high level of athleticism.

Each week, the team practices around two to three times. Practices consist of conditioning, a team meeting, stretching, reviewing of the sideline cheers and stunting. Flyer Emma Roaten (12) has been cheering for five years. She notes that many people are unaware that cheering stretches beyond football, largely because the team cannot showcase their skills during games.

“At practice, we’ll focus on football for like 10 minutes and then focus on competitive [cheer],” Roaten said. “What people see at games isn’t what we do at all, and we usually can’t do the harder stunts at games because we don’t have mats.”

The competitive aspect of cheer is both time-consuming and strenuous. In the weeks leading up to competition, the number of practices are increased up to six days. Stunt groups can also opt in to participate in additional practices. This season, the team faced many challenges regarding preparation for competitions. Several girls have suffered from injuries, causing the team to rely on alternates to compose an entire stunt group until more changes could be made. Each time someone recovered, the routine had to adjust again.

“At the beginning of the season, it was going super well, we had a whole new team, but everyone was working super well together,” Roaten said. “Then, I’d say like any year in cheer, as it goes on, people get hurt, stuff happens, stunt groups have to get changed, but I’d say it’s been a pretty good season.”

Jade Williams (11) cheered throughout middle and high school. She describes how the team overcame some of the communication and teamwork challenges that they faced.

“Talking it out,” Williams said. “We did this lemon squeeze where we just let everything out on the table so we could get past it.”

The team won their first competition. The results of the second competition are still unknown, but the team is doing a virtual competition to get a bid to go to High School Nationals. In the past, a lack of funding and early ends to the season have prevented the seniors from going to Nationals. No matter the result, the team’s progress this year is particularly exciting for seniors.

“It’s been exciting, and we’ve really grown in our dedication to the sport,” Kellett said.