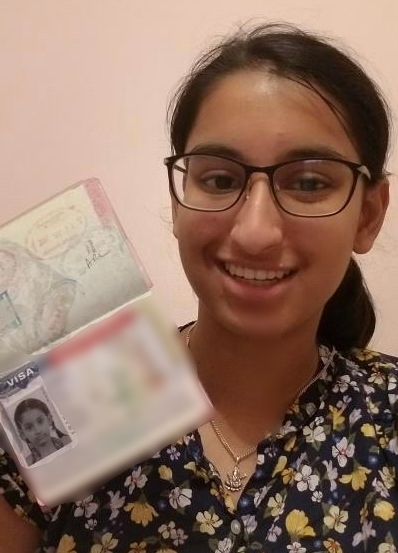 Aditi Mishra (11) poses with her immigrant visa. Mishra and her family immigrated to the U.S. from Nepal in November 2011.

Pizza, burgers and fried chicken. Odd obsessions with football. Welcome to the United States: land of the free, home of the brave. To many, the U.S. is a beacon of hope and opportunity. Upon arrival, however, immigrants are faced with a society far different from much of the rest of the world. One that is both difficult to reach and to fit into. White Station, which boasts a diverse student body, is no stranger to students who have fought, or are currently fighting, their way through such an arduous experience.

“Many people think immigration is just as simple as filling out a form and getting a visa,” Aditi Mishra (11) said. “The process itself takes years and has many complications. Six months is the minimum for updates on your status, during which there is pressure on you constantly. Sometimes people don’t have that luxury.”

Before becoming a citizen, there are different statuses immigrants can hold, such as a work visa or green card. Work visas permit an allocated period of time for people to work before they must return to their countries and can lead up to a green card. Green cards award permanent residency and can eventually allow one to obtain citizenship. However, since statuses are ever-changing, even with the correct qualifications, the risk of deportation looms. José Cruz (9), who is a first-generation immigrant, has witnessed this firsthand.

“Some of my family members have lost residency and were deported, which really ruined our family dynamic,” Cruz said. “I’m lucky because my immediate family is still together, but I have cousins who are still traumatized from losing those closest to them. Watching them go through that was just really sad.”

In addition to the challenges of obtaining and maintaining residency, the changes in the social environment pose another obstacle. Though White Station and the United States alike offer diversity to soften the blow of moving to a brand new country or frequenting a brand new continent, struggles of assimilation are unavoidable. Lingering discrimination and misunderstandings of immigrants combined make it difficult for new residents.

“This country is not the most accepting,” Cruz said. “There is a language barrier, and my mother had to take a lot of classes to learn English. We often receive the common ‘go back to your country’ as a result.”

Despite the many difficulties immigrants face, urgency often drives families to leave their country. There is a common misconception that moving to the U.S. or any other nation is a choice, while in reality, it is a necessity for many due to issues like high crime rates and poverty plaguing their lives.

In addition to more desirable living conditions, the United States persists as a symbol of freedom and opportunity to immigrants. Many flock to the nation to further their careers; others seek to provide a better education for their children, which is the case for Lingyu Li (12). Li is currently a permanent resident hailing from Nanjing City, China, and has drifted around the U.S. for much of his life.

“We immigrated to provide a better education for me, and I am glad,” Li said. “The schooling system in China is very cutthroat. In China, we were a well-off family, but we threw that away when we came to the U.S.”

Though immigrating to the states is a bountiful endeavor, it is not a simple process. The acquisition of citizenship is not guaranteed despite the time and effort one must put forth in the meantime. Many people are not fortunate enough to see the entire process through, and for others, it is as difficult to adjust as it is to wait everything out.

“Moving is always hard, but moving an ocean away from everything you’ve ever known is like jumping off a tower and hoping for the best,” Mishra said.