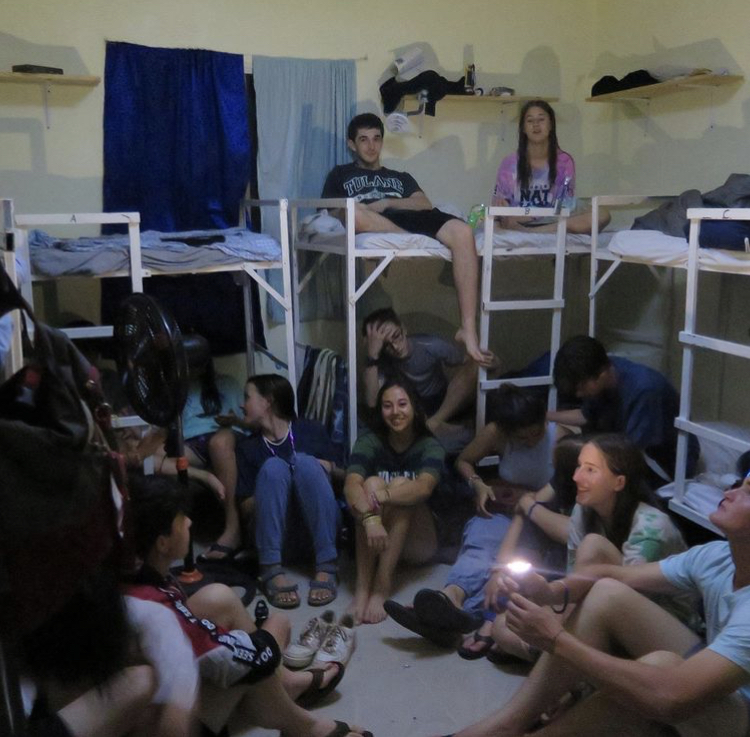 Presley Spiller sits with her other service project members and participates in “circle,” an event where campers gather together to talk about their thoughts and feelings they have experienced on the service trip. Despite not knowing anyone, Spiller explained that she grew very close with the other members and they became “like family” to her.

Presley Spiller (11) had never done something like this before. Building a house with only a shovel and pickaxe and living with 33 strangers in a house in the Dominican Republic was, for her, a completely new experience.

Spiller did this in Cotuí, Dominican Republic through the international community service program Vision Service Adventures. Spiller lived in Cotuí in a single-story house with 33 Vision students from all across the country for one month. One vital rule of Vision is you cannot know anyone in your project before your stay there.

“I love meeting new people … [I got to meet] new people from all over the states and also the world,” Spiller said. “Immediately when [I saw] them, it was this connection of ‘I’m gonna be living with you for a month; we’re gonna be doing everything together’ … so it’s not even ‘go to the small talk’ … we were like family.”

In hot and humid Cotuí, Spiller and other students set the goal of building an entire school in one month. Students would take breaks while helping one of the island’s daycare facilities, but the more demanding goal took hours upon hours of work a day.

“There’s no machinery there, so we did it all by hand with shovels and ‘piquos,’ [which are pickaxes] … the first day was groundbreaking, and we built trenches that were two feet deep,” Spiller said. “That was definitely the hardest workday because when I say back-breaking, I literally mean back-breaking. It was so treacherous.”

After a day of work, students left their worksite to have an afternoon activity with their neighbors, or “vecinos,” and an evening activity with their individual group. Every other night, they would have what was called “circle,” where students gather together and connect through their unique yet shared experience.

“Everything that was going on was so overwhelming but beautiful,” Spiller said. “It was just great to articulate all those things with each other, and it was just a really open space … it kind of kept everyone in the present and made sure we were all on the same page.”

Even after Spiller and her group worked for hours building in the heat, they could only shower every other night with a hose — but those were the least of their problems compared to the sickness that affected the group.

“About five kids went to the hospital because they all got sick,” Spiller said. “One kid got sick from the parasites in the bloodstream and had to get an IV fluid … I was one of only four kids out of the 27 who didn’t get sick … we had a lot of E.coli; we had a lot of parasites … and that’s mainly because … we were just not adapted to [living here].”

There were many physical struggles Spiller had to face, but she maintains that she would do it all over again. The people she met, the things she did and the memories she made there were nothing short of a once-in-a-lifetime experience

“The very first night — I had to say I started it — I made a friend named Ella, and she and I were like ‘We should go play outside or something,’” Spiller said. “So, we found a soccer ball in the depths of our little porch and started playing outside … All of a sudden, these kids around the houses started to creep out and started staring at us … and slowly but surely, the other kids that were part of the organization … just kind of came together … it was the most magical moment I think I’ve ever experienced … we had an immediate bond … an initial connection with the community.”