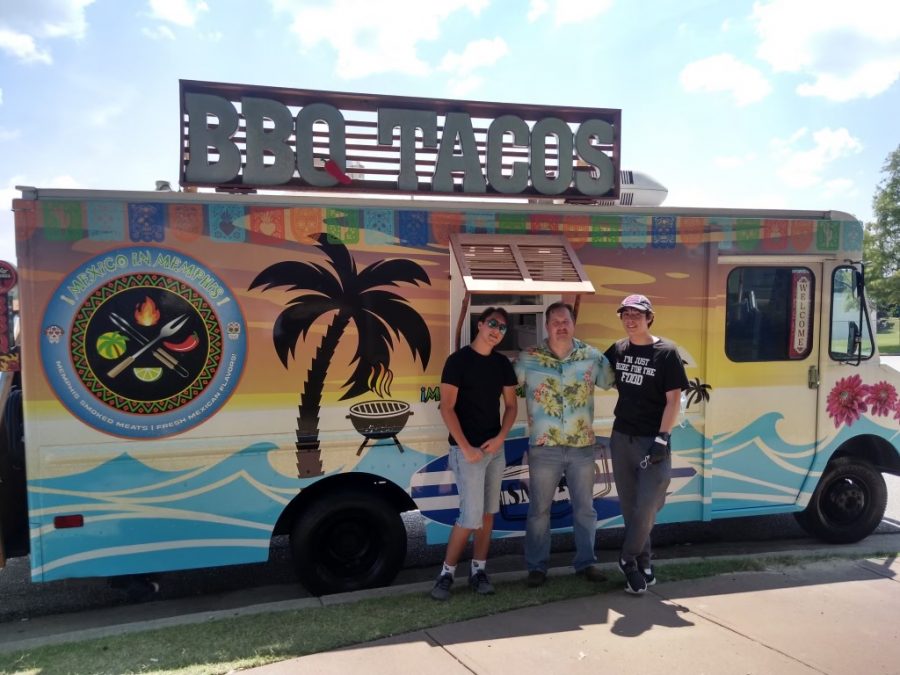 After a busy opening day at Baptist Corporate Headquarters, Tim Shirley (middle) celebrates the product of his hard work. The whereabouts of ¡Mexico in Memphis! can be found on Instagram and Facebook, @mexicoinmemphis.

As Tim Shirley, the husband of Angelica Shirley, a Spanish teacher at White Station, looked across the sunset of Acapulco, Mexico years ago, he stood with his new bride, and an immense love for her culture dawned on him. Growing up on mayonnaise sandwiches, the burst of flavors from Mexican cuisine opened a new door to Tim Shirley’s love for food and cooking.

“Going to Mexico, I was exposed to so many flavors … through all the little taquerias and the little roadside taco stands,” Tim Shirley, the owner of ¡Mexico in Memphis!, said. “Coming back home, I was so inspired, so it was like ‘oh wow, I want to learn how to make that.’”

The ¡Mexico in Memphis! food truck, decorated with palm trees and papel picado, opened for business in July 2021, immediately winning praise from the Memphis community. Through a fusion of traditional Mexican dishes and Memphis barbecue, the tacos, burritos and barbecue nachos could satisfy any hungry soul.

“The variety of tacos is really the main thing of it,” Angelica Shirley said. “He wanted to present a creative take on tacos by introducing barbecue sauces which he makes himself. But, he also wanted to present more authentic dishes too.”

Before meeting his wife, Tim Shirley’s knowledge of Mexican cuisine was not much more than many people know today — a “Tex-Mex,” Americanized style. The rich flavors of the truck’s food can be traced to the Baja peninsula where Angelica was raised. Through his many trips to Mexico, Tim Shirley was immersed in the Mexican world of cooking by learning from his wife’s family and even just walking by street vendors.

“When I started developing my cooking skills and enjoying cooking, I wanted to recreate foods Angelica grew up on,” Tim Shirley said. “This is not your standard Americanized fusion with Mexican dishes. It’s specifically Memphis barbecue and some very authentic Mexican flavors.”

Tim Shirley is no stranger to barbecue, and he even has a blog, Memphis BBQ Guide, where he has reviewed over 300 barbecue restaurants across the Southern U.S. In addition, he also judged barbecue competitions for 14 years.

“He spent many years educating himself about barbecue nationwide as we traveled a lot,” Angelica Shirley said. “Now, it’s his purpose to educate people about the beauty of Mexico.”

Tim Shirley’s dream of starting a food truck was born two years ago, and through that time, he researched extensively on the topic, made a business plan and found a mentor to help guide him.

“I have learned from traveling there, coming back, getting inspired, [and] looking up recipes to try to learn how to make them, but then also playing with those flavors — always starting with the authentic flavors first because you have to understand the soul of the dish,” Tim Shirley said.

A blend of both Tim and Angelica Shirley’s cultures, ¡Mexico in Memphis! introduces an original take on Mexican street food. The truck not only adds to the already existing Mexican culture in Memphis but also introduces a new twist to it.

“Some of the flavors I’m exposing people to are not your typical Mexican flavors,” Tim Shirley said. “The sauces and flavors that I use are maybe the lesser-known flavors. I think it’s fun to share that part of Mexican flavors with Memphians.”

In the Shirley household, the stereotype of women cooking is indiscernible. Although Tim Shirley cooks the majority of the meals, Angelica Shirley still plays a role in the kitchen.

“Ironically, my mother did not bring with her many recipes because she doesn’t cook really, but she did bring knowledge,” Blake Shirley (12) said. “Sometimes my dad will be like, ‘what kind of dishes did you love?’ and he would recreate those the best way he knew how and with her advice.”

Cultural diversity is inescapable in the modern world, and Memphis is not an exception. This truck proves the many possibilities to connect with others and share a common humanity.

“In America, since we are very diverse, it is important to immerse yourself in other cultures because you want to be able to understand people and interact with them better,” Rebecca Hernandez (11), a ¡Mexico in Memphis! customer, said.