Safety at school — or the lack thereof 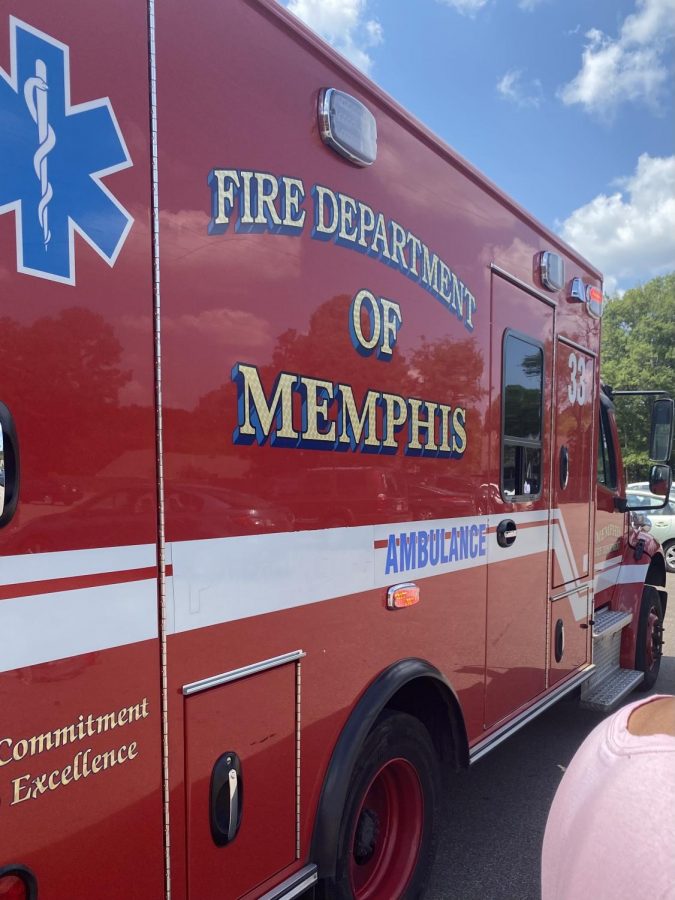 Monday, Sept. 17, Christopher Valle (12) was hit by a student speeding in the parking lot. The ambulance and police rushed to White Station as chaos ensued on campus.

A thud reverberates from the senior parking lot. A crowd begins to form — then suddenly police sirens erupt through the chatter, and an ambulance rushes onto campus. The news spreads: a student has been hit. But this is not the first time the police have been on campus that day.

While many dread Mondays, no one was expecting the series of events that happened Monday, Sept. 17. A gun found in student possession would denote only the beginning of the day’s difficulties as only hours later, Christopher Valle (12) would be hit by a student speeding in the senior parking lot.

Now, students and faculty move on with their lives, but these occurrences leave an important question: are the inhabitants of White Station still safe?

“I do feel safe at White Station,” teacher Monique Fisher said. “I have a lot of faith in the large majority of our students to not only do the right thing but to care enough about others to alert the staff and the administration about potential issues … any community you get in, there’s going to be that one to two percent that are going to be an issue. You just have to expect that.”

Once the threat of firearms on campus became a concern, administrators took immediate action to prevent it from happening again. With a Shelby County policy and a warning from Principal Carrye Holland, White Station implemented a new addition to students’ routines: metal detectors. Along with this daily morning detour, however, came the question of their overall usefulness.

“I think [metal detectors are] helpful, but also if we aren’t actually using them, then they’re not going to do anything,” Dahlia Townley-Bakewell (11) said. “[I]t is a kind of chilling reminder of the violence that happens all the time. But it’s worth it if we’re safe … if they just make it effective.”

Within a week of their introduction, the consistency and efficiency of these metal detectors seemed to diminish. Students reported walking through without being checked, with some still unaware where the metal detectors are even located.

“I knew that they were bringing metal detectors, but I haven’t seen them in use,” Eilene Liu (11) said. “I don’t know where they put them because I remember the first day they said that they were going to start checking our backpacks — I walked in, and they just let me walk by. I haven’t seen anyone go through the metal detector or be checked at all, so I feel like it hasn’t made a difference.”

One issue inhibiting their effect is manning the metal detectors. Without enough manpower, the task of thoroughly searching students is much more difficult.

“The other problem with the metal detectors is frankly we aren’t equipped like schools in other places that have used them for years to run the process efficiently,” Fisher said. “I feel like it’s well-meaning, but it’s just not logistically possible to have metal detectors used in a way that’s effective, and there [are] too many variables.”

While a school is meant to be a safe haven, a place for learning, there are always these variables that threaten the safety of these learning grounds. All one can do is their best to protect the students and prevent these situations from happening. In the case of Christopher Valle, however, the unthinkable occurred.

“[W]e were getting ready to leave, so Chris started walking … towards his car,” Liu said. “Nima and Kartik … screamed ‘Get out the way, get out the way — move!’ … I turned around, and the second I turned around — it’s this big black SUV, and it’s speeding like … way faster than it should have been going, probably 30-40 miles, and then it just ran right into Chris.”

After the collision, Valle went flying for three parking spaces — his coat, glasses, earbuds each dislodged and scattered across the ground. Due to Liu’s quick thinking, an ambulance was called, and Valle survived, making a quick recovery, but the trauma of the incident still lingers.

“After we checked his pulse, he started seizing,” Kartik Rustogi (12) said. “We thought his whole body was shutting down before his death or something — it was that brink of that moment that I realized I could really lose him. It really … disturbed me because it could have been me or Eilene — it could have been all of us. That really opened my eyes that anything could happen in an instant.”

Thankfully Valle recovered, but his story still serves as a reminder that accidents can happen anywhere — especially in a parking lot full of newly-fledged or simply reckless drivers. Even with White Station’s policies put in place to keep its students as safe as possible, students must always remain vigilant to avoid such fleeting but devastating tragedies.

“I honestly can’t give [the school] too much blame,” Rustogi said. “I mean, sure, I’m a little biased, and I do want to give them a little of [the] blame, but it’s not their fault … nobody would expect anybody to speed in a parking lot.”

Since difficulties are to be expected coming back into in-person school again, it leaves even more room for good to happen. Students and faculty both hope to press forward into the year without the recurrence of calamitous incidents such as these.

“Students and faculty alike are so grateful to be back in a social setting that most people want it to work — I know I do,” Fisher said. “I have the years to retire, so the fact that I am here speaks for how optimistic I am about this year … I still feel like we’re going to have a great year.”