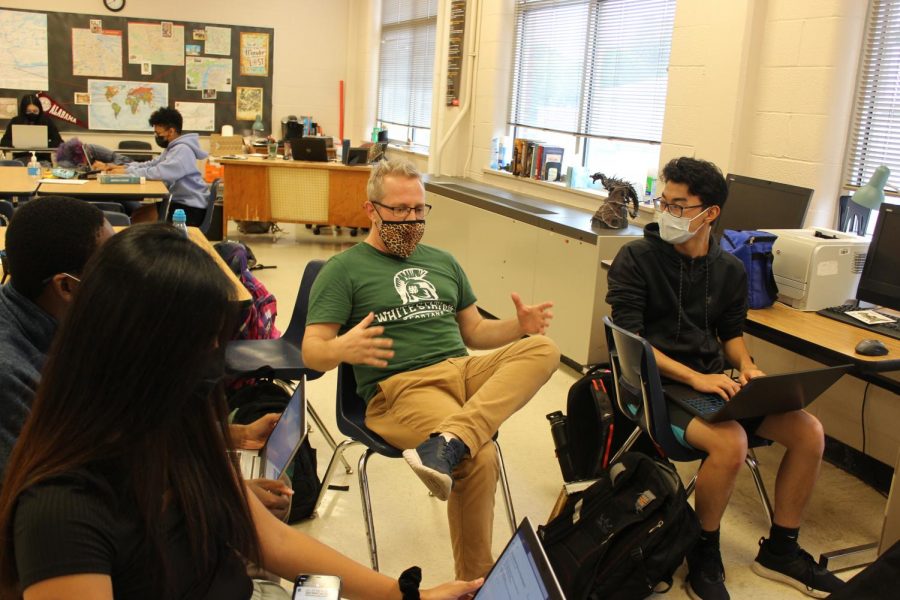 Seth Burgess tells his students a personal anecdote while they work on assignments. Fridays are usually designated as fun workdays for his students when they can work and talk with classmates simultaneously.

Returning to school has not been easy for both students and teachers, but new teacher Seth Burgess has quickly won over his students with his unconventional ways of managing his Advanced Placement (AP) Language and Composition class.

“[The class experience] has been great,” Burgess said. “The students are very conscientious, very intelligent, very eager to know more.”

This is Burgess’ first year teaching an advanced placement class but equipped with nine years of teaching different levels of English, literature and modern rhetoric, he has set himself big expectations to take his students to a higher level.

“[Principal Carrye Holland] told me that she wanted that extra five percent from her best students … and so that’s what I’ve really been trying to achieve,” Burgess said. “How can I take the top AP students in this school, and how can I really push them up above?”

So far, many of Burgess’ students claim to appreciate the atmosphere he has formed for his students.

“[The class experience] has been wonderful,” Nyla Johnson (11) said. “I love the environment of his class … he makes me feel so comfortable.”

Unlike most teachers, Burgess’ grading method consists of a positive point system. Students have the opportunity to accumulate 1500 points of work when only 1000 points are needed to earn an A. Recognizing that many of his students are typically in multiple advanced classes and have multiple extracurriculars, he uses soft deadlines.

“His deadlines don’t take away from the quality of work you do, but you get an A, and there is really not a lot of pressure,” Ray Wu (11) said. “It helps a lot, and I think it helps everyone.”

Burgess created his gamified learning system seven years ago after reading the book  “Reality is Broken,” and becoming concerned for the psychological wellbeing of his students.

“Honestly, the modern educational system is psychologically damaging kids,” Burgess said. “When you walk into a classroom you have a 100 percent, and throughout the rest of that year, you are graded on every mistake you make, and you are going down constantly.”

After developing and implementing this system, he soon discovered his students performed better in his class and were learning more with his point system.

“…if you get [something] wrong, fix it, then resubmit it,” Burgess said. “I’m not going to give you partial work for partial credit — you’re not learning it.”

Burgess dedicates special attention to avoid having his students focus on their mistakes, but instead learn to appreciate them and most importantly, learn from them.

“The psychology of [the existing grading system] tells students that every mistake they make is an important failure, whereas mistakes should be important [as] learning tools,” Burgess said.

Although many of his current students appreciate Burgess’ gamified system, some think it could only be applied to certain classes.

“This is something that is very class-specific,” Wu said. “For my physics and my math classes, I think definitely not because if people started doing assignments late … they would be very not prepared for the AP exam.”

Burgess believes the way his class is run also prepares his students for adulthood.

“Overall, what this is teaching you is the real-world skills that you need to be able to succeed and thrive in life,” Burgess said.