Girls soccer team plunges into an all varsity comeback season 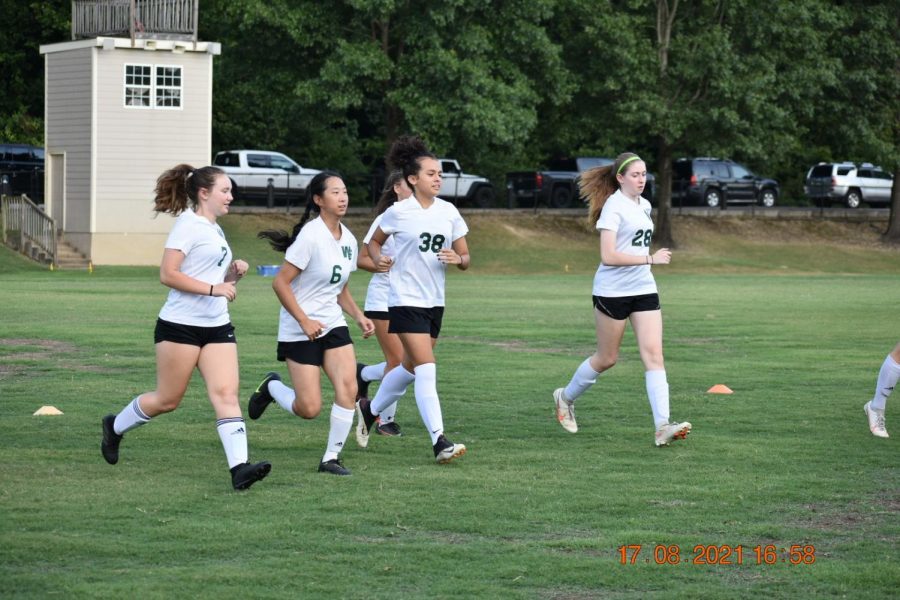 Charged with pent-up energy from last year’s nonexistent season, the girls soccer team warms up and prepares to play their first game in a season with only one team instead of the regular two. Seniors experience their last season in a unique way, and underclassmen prepare to play alongside their veteran varsity counterparts.

Shouts of victory and the thuds of cleats on grass fill the air alongside the distant shriek of a whistle. While these occurrences are normal for any Lady Spartans soccer game, this season is anything but. Coming from a year without a season and plunging into an only varsity one presents a plethora of challenges and emotions, but due to a closely bonded team and a vast amount of personal growth, this season remains full of potential.

Due to some residual impacts of COVID-19, such as limited communication and difficulty recruiting, the team did not have enough players to form a junior varsity (JV) and varsity team as normal. Current players have noticed advantages from the decision to only have a varsity team for this season.

“We are only playing varsity because the majority of the team would have to be double rostered for JV and varsity,” Ainsley Grant (12) said. “Just playing varsity means we have more available subs, and we’ve been able to bond as a team instead of dividing into two.”

Recovering your physique and team synergy is difficult after a gap year, but not impossible. Although Hannah Meadows (11) coped with these expected consequences, she also had another factor that made missing last year’s season more difficult — and having this year’s season more meaningful.

“It was bittersweet,” Meadows said. “I didn’t get to play with my sister her senior season, and we most definitely would have made it far if we got to play last year. I was more excited to get back into the groove of things, and I’ve missed playing with my friends and the pregame feelings.”

Even with the benefits that come from only having one team, clear adjustments have had to be made. Between preparing players for longer playing time and navigating a team ranging from freshmen to seniors, changes to practices and team activities have been inevitable.

“With the lack of players, the team most definitely had to focus on attending games, practices and most importantly, staying fit,” Meadows said. “Due to the little numbers, many people have to play the whole game, so coaches have made sure we’re doing what we need to be doing, such as conditioning, running a mile in a certain amount of time and shuttle runs.”

One of the largest challenges the players have identified is playing against schools that avoided missing a season last year. Teams that never had to recuperate skills or rebuild old habits have posed as formidable opponents, such as St. George’s Independent School and St. Benedict at Auburndale High School (SBA).

“Our first game of the season against St. George’s was definitely a good performance,” Grant said. “We lost 3-2, but we managed to gain the advantage to score the two within the last 12 minutes of the game. We fought through and never gave up, which made St. George’s nervous.”

With a close game to open the season and many wins and other close games following, the players are able to look forward to a team that grows more in sync every week. Although an objectively successful season remains a priority, many players want to channel team energy into becoming as connected as possible.

“In relation to the team, my goal for the season is to become more acquainted with our playing styles and really become a well-oiled team,” Morgan Johnson (11) said. “We’re still getting used to each other’s skills, so I want our team to be completely together by the end of the season.”

In addition to any goals set for the team, many players still carry individual goals for their comeback seasons now that they have the chance to.

“A personal goal of mine this season would be trying new positions on the field,” Brinnley Kennedy (11) said. “I enjoy my position at defense, but I’d like to see what else I could do in other positions.”

For some seniors, the success of the season is equally — if not less — consuming than the emotions that come in tandem with the ending of a team and career that had a massive impact on their high school experience. For Grant, having one rather than two teams does not impact her feelings for the conclusion of her high school soccer career in the slightest.

“It feels bittersweet [going into my last season],” Grant said. “I am excited to finally be back on the field and playing for our school, but it is sad thinking that we all have been playing together since freshman year, and this is our final time together.”