From Golan Heights to Eliat: the Cassius twins’ summer in Israel 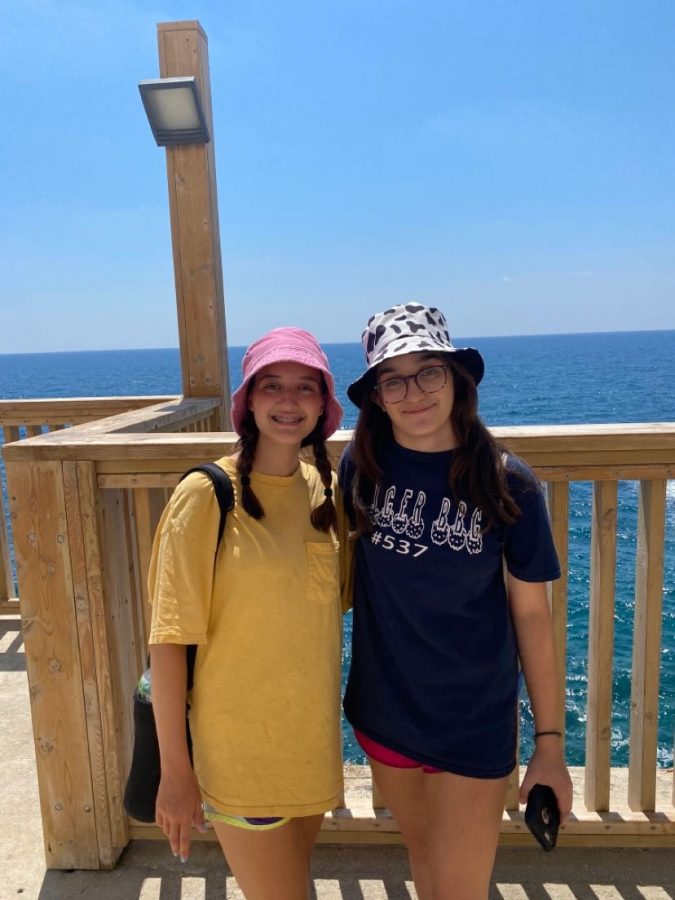 Abby and Mandy Cassius (12) pose near Achziv beach after learning about the Rosh Hanikra grottoes. This was one of their many stops during their month-long vacation in Israel.

For Abby and Mandy Cassius (12), the itinerary for one night of their summer vacation consisted of staying in Bedouin tents, riding camels and meditating in the desert. The twins created these memories and more in the country of Israel, the birthplace of their Jewish faith. Through a Jewish Student Union (JSU) summer program, the sisters were able to take this trip, which began with a 12-hour plane ride to Tel Aviv. They traveled with a group of 36 students and six advisors from cities between Chicago and Memphis, spending four weeks in Israel.

“We’ve never been out of the country before so this was like a one-of-a-kind experience,” Abby Cassius said. “ … A lot of Jewish people say that [Israel] is like their homeland, and we just wanted to see it for ourselves.”

Throughout their trip, the girls were able to sightsee many unique places like the Western Wall, a holy place for Islam, Judaism and Christianity. One of Abby Cassius’ favorite memories was the group trip to Hezekiah’s tunnel.

“It was pitch black in the tunnels and it was a very small space,” Abby Cassius said. “ … We were literally walking through where water used to flow, and it was a super cool ambiance, and it was cold and we got about waist-deep in water and it was so fun.”

The girls got to go to many different cities throughout the trip including Haifa, Herzliya and the capital city Jerusalem. While in Herzliya for a free weekend away from their group, they stayed with family.

“Our mom basically told us you’re going to be staying with family that you’ve never met before,” Mandy Cassius said.  “And we went to see them and we got to know them and it didn’t feel like they were strangers even though we’d never met them before.”

The Cassius’s met other family members at dinner for Shabbat, which is the Sabbath, a holy day in Judaism. Daily life in Israel has a large focus on religion and culture as schools let out early on Friday for the Sabbath and work weeks start on Sundays.

“Shabbat’s a big thing,” Mandy Cassius said. “… honestly you could be walking down the street and a person will invite you into their home.”

While the girls were able to have many religious experiences on the trip, they were also able to enjoy recreational places like the Blind Museum.

“We basically walked through [the Blind Museum] — it was pitch black … and the tour guide was blind …  and they were describing the room from their point of view,” Mandy Cassius said. “… and at the end we got to order food in the blind room, and it was really cool because we couldn’t see.”

Although the twins were intrigued by all the country had to offer, they appreciated the familiarity of being around other Jewish teens and adults.

“Being there it didn’t necessarily feel like I was returning home, but it was so inviting and open and like I felt like I belonged there,” Abby Cassius said. “And it makes you feel really good to know that there’s other people who have also struggled to feel welcome where they are.”

Although this trip was the twins’ first time visiting Israel, they do not want it to be their last.

“I definitely want to go back, whether it’s to learn the language or [to] just study abroad … they have a good medical program there and just staying with family and all of that just sounds great,” Mandy Cassius said. “When we were there we toured Haifa University and it seemed like a pretty nice school so I [have got to] keep my options open.”