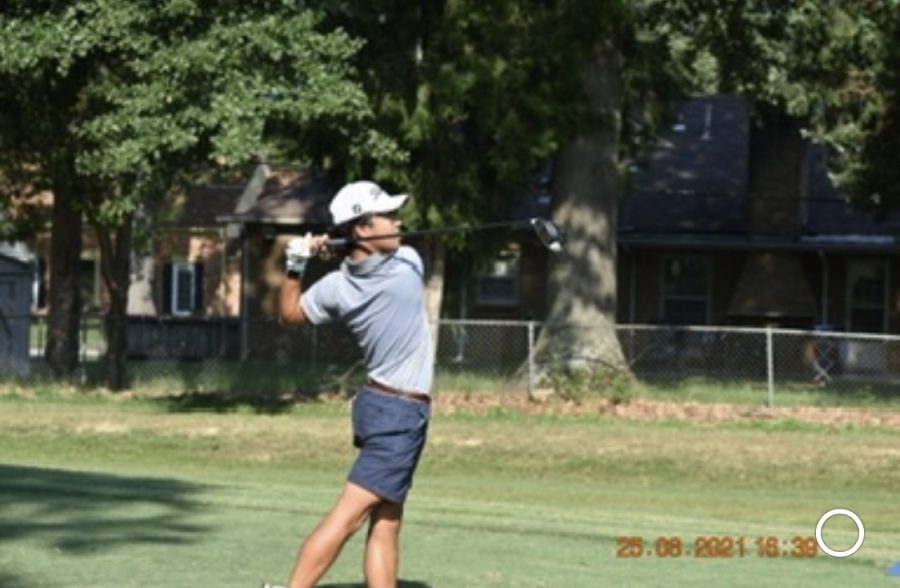 Matthew Kim (12) observes the outcome of his shot during a golf match. After winning the Class AA Girl’s and Boy’s Championships, the golf team is prepared to take on regionals.

Square your feet, straighten your arms, swing. This year, the golf team has a multitude of new players. Player Matthew Kim (12) has golfed since he was four years old but became serious about the sport around six or seven years ago. Part of the season has been focused on integrating the large number of underclassmen who have joined the team.

“This year, it’s more [about] trying to lead the underclassmen so we can still have a team next year; trying to get them to stay on the team and keep them motivated,” Kim said.

Kim and several other players have the potential to advance to the state competition, located in Sevierville, East Tennessee, in early October. As one of the more serious players on the team, Kim attempts to emulate Collin Morikawa on the golf course.

“I look up to Collin Morikawa. He had a rough start in California, and he’s just skyrocketed. He’s playing really well right now. I admire his game, so [I’m] trying to be more like him,” Kim said.

Like any other sport, being a player on the golf team requires a large amount of time to develop their skills and attend events. Players must balance this extreme sports commitment with their school work. Kylie Grant (10) has been playing golf for around three months. This is her first year on the team, and she describes the responsibilities that come with being a student-athlete as manageable.

“We do miss a lot of school because of golf and so it’s kind of hard to balance it, but it’s just a lot of late nights and some late assignments, but you catch up,” Grant said.

The large time commitment and welcoming atmosphere on the team have allowed players to focus on both enjoying themselves and performing well. Team captain Madeleine Mejia (12) believes that this fun atmosphere allows players to bond.

“I still drive people [to practices and games], and we get to talk a lot and I feel like we are connecting more this year, so that’s fun,” Mejia said.

Fun, but brief. Starting in August, and ending in late September for most of the players, the golf season ends as swiftly as it began. Those who are advancing to state will have their season stretched into October.

This year’s team is the Class AA Boys and Girls Golf Champions. Going into the tournament, players attempted to stay focused on the challenge instead of being distracted by intimidation.

“I would say our strategy was to just have fun and try our best and apply the corrections we got at practice,” Mejia said.

In a way, this tournament was practice for regionals—both physically and mentally. Moving forward, players will feel more motivated after seeing their hard work come to fruition in a win.

“We haven’t played this well in any tournaments so far, so I feel like after winning, there’s more reason to keep playing and practicing to play better at the next tournament,” Kim said.