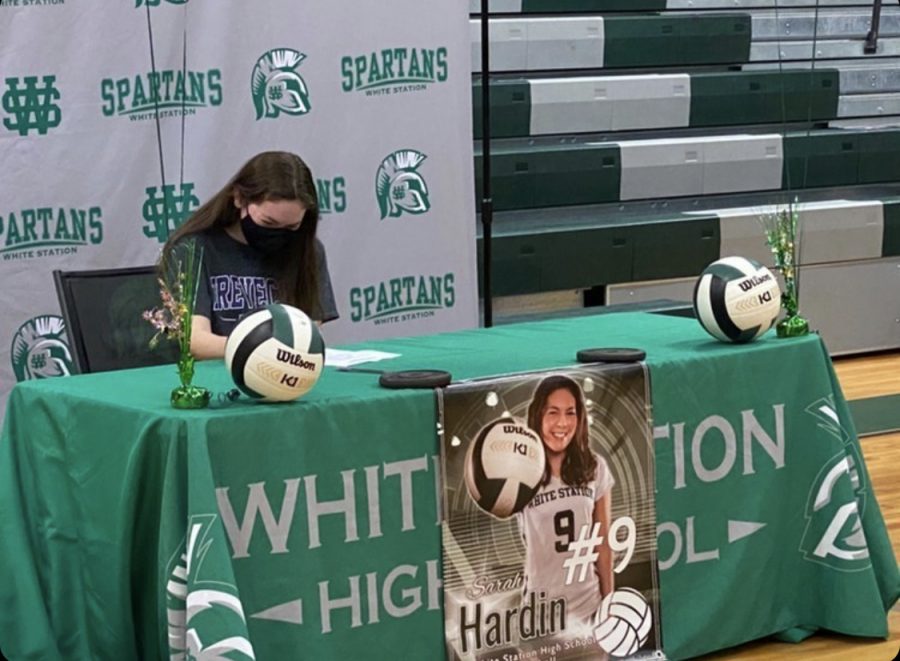 Sarah Hardin autographs a letter of intent at her signing party. In the fall she will attend Trevecca Nazarene University, where she received an athletic scholarship for their volleyball team.

As seniors transition into the end of their high school experience, student athletes focus on the next phase of their athletic career. Sarah Hardin (12) has been playing volleyball for seven years and will join Trevecca Nazarene University’s volleyball team in the fall. She is looking forward to college volleyball because it will play a more significant role in her life and allow her to form strong bonds with her teammates.

“[W]e’re going to lift in the morning and then go to class … practice in the afternoon … then have team bonding … work out together, and [then] eat together,” Hardin said. “I’m really excited for that.”

First, athletes must go through a selection process to become part of a team. Joshua Wilkes (12) has been playing soccer for thirteen years and will attend Mississippi College in Clinton, Mississippi next school year. This year’s recruitment process varied from past years, largely because of the pandemic.

Choosing one’s commitment level is an important step in determining how to approach the college recruitment process. For some student athletes, playing in college was not always their goal. Sofia Santo (12) is walking onto the soccer team at Oglethorpe University in Brookhaven, Georgia. Since she did not consider playing in college for the majority of high school, her process of joining the team looked different.

“When I was playing soccer in high school, I didn’t really think about playing for college,” Santo said.

After being accepted into Oglethorpe, Santo became interested in playing for their soccer team. As a Division Three team, the Oglethorpe soccer team seemed like it would be less pressure than a team in a higher division. Overall, Santo is excited about the chance to stay active and meet new people, but she does express some concerns about “walking on”- the term used to describe players who are not receiving a scholarship to play.

“[My concerns are] just the dynamic of me being a walk-on player and not always thinking about playing in college, because I’m sure a lot of the other people who are playing have thought about it since high school,” Santo said.

For others, however, the college recruitment process required reaching out to coaches from a multitude of schools. Players who have been recruited as well as players who are walking on must have footage to show coaches. Hardin, for example, posted videos on several platforms, such as YouTube, for coaches to see. The recruitment process requires determination and patience, but the outcome will be fulfilling.