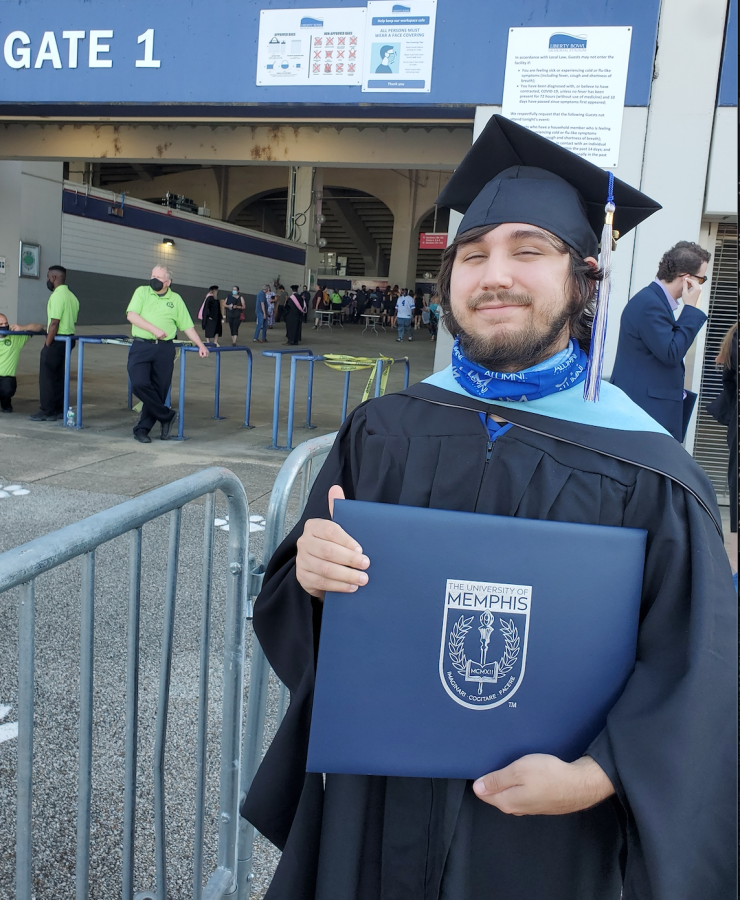 Lira poses with his degree binder at the University of Memphis. He finally finished the requisites needed to graduate from his master’s degree this year.

Not just any teacher can accomplish the task of acquiring a master’s degree while teaching four levels of Japanese to high school students. One teacher who could is Dylan Lira, who has been working to obtain his Instruction and Curriculum Leadership (ICL) master’s degree for the past two years and graduated this year.

His journey as a White Station teacher began after finishing his Japanese and music undergraduate degrees. Lira learned that the current Japanese teacher at White Station was leaving. Not wanting to deprive the current and future Japanese students of a teacher, he applied for the position.

“The Board of Education told me the process about how you basically have a temporary licensure to teach for the first few years, but you’ll have to get a permanent licensure afterward,” Lira said.

Lira was chosen for the job and began the process of obtaining the master’s degree he would soon need. His schedule consisted of teaching Japanese I, II, III and the advanced placement level to students during school hours and attending his university classes in the afternoon. This routine proved to be no easy task, especially when he took too many classes in the first semester.

“I took three classes in the same semester … That was really hard to do,” Lira said. “I was spending every Tuesday and Thursday evening, about three hours each, on campus at the University of Memphis … I basically had no free time.”

Luckily, Lira did not endure this difficult journey alone. Colleagues at White Station who were traveling the same path, teachers who had already accomplished this journey and his family assisted him with what he needed. Even his two dogs aided him through his work, acting like therapy dogs while he sat through his university classes.

“I had awesome colleagues that would be able to help me out, no matter what was going on,” Lira said. “Whether it was old mentors that I took as teachers, and they would give me tips, or new teachers that I met that were taking the same steps as me.”

Playing the role of both a teacher and student finally came to an end this year, after Lira passed his final requirements. He persevered through the ups and downs of the journey, which have now paid off as he will soon receive his long-awaited diploma. Lira also attributes his success to his students, who he says were essential to his learning process.

“Even though it was so chaotic and overwhelming at points … it was so much fun,” Lira said. “I was able to bounce ideas off of students. I was able to get my students to give me tips.”

Lira’s overwhelming workload proved to have had no effect on his teaching abilities. One of his students, Anyu Gu (10), describes why he likes Lira’s way of teaching.

Not only has Lira demonstrated his capability of teaching Japanese to his students, but he has also left significant impacts on some of them. MaLeiah Jackson (12) tells of how she both learned to appreciate the Japanese language and learned how to be a better person from him.