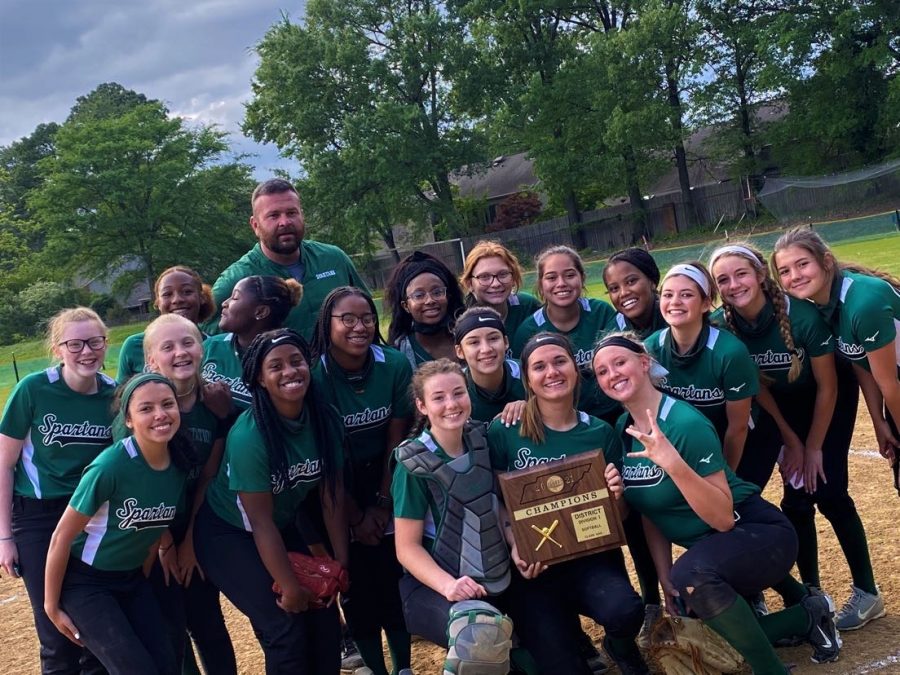 The softball team, led by coach Bob Alberson, poses with their district championship plaque. Despite a unique season with a rushed start, the team managed to conquer tough opponents and overcome the barriers set by COVID-19.

In March 2021, the White Station softball team was thrust into their first game with barely a week of practice for a season riddled with small audiences, social distancing and masked playing. Now, they complete their unique season as district champions.

Due to the team’s unusual challenges to win the district champion title, many players already feel empowered to do the same next season.

Certain components of a regular softball season were taken away or altered because of COVID-19, such as pre-season try-outs and recruiting. Because of the lack of these opportunities, fewer practices and a smaller team posed obvious obstacles on the path to become district champions. Nonetheless, the team was able to go into the championship with a winning attitude and overcame the odds formed by COVID-19.

“I knew we had it in us, and if we worked hard enough and played together as a unit, we were going to be successful,” Christina Askew (10) said. “Starting late wasn’t really a big issue because everyone loves the sport and … we have coaches who pushed us to be better and play smart.”

The physical restrictions from COVID-19 have decreased since the beginning of the season — meaning family and friends could attend the team’s championship game. Not only did the presence of an audience spur confidence in the players, but it also ensured the team was able to have fun while playing.

“The atmosphere was very lively,” Bella Canale (11) said. “Everyone on our team [was] cheering for our batter. [Noise] doubled after home runs were hit. The crowd was cheering. It was a blast.”

However, even with a lively audience and a steadfast attitude, mistakes while playing can easily disrupt the flow of any team. While mishaps may have interrupted the course of previous games, a positive mindset and confident playing style were key to overcoming these hurdles.

“The only challenge was getting into our own heads after mistakes throughout the season, but when we played in the championship game we did good, played in the moment and stayed positive,” Askew said.

In the end, communication and determination propelled the team to a successful district championship game despite a multitude of quirks with this season.

“Our team played together, talked together and fought together,” Canale said. “If we played individually, we would not have won the game.”