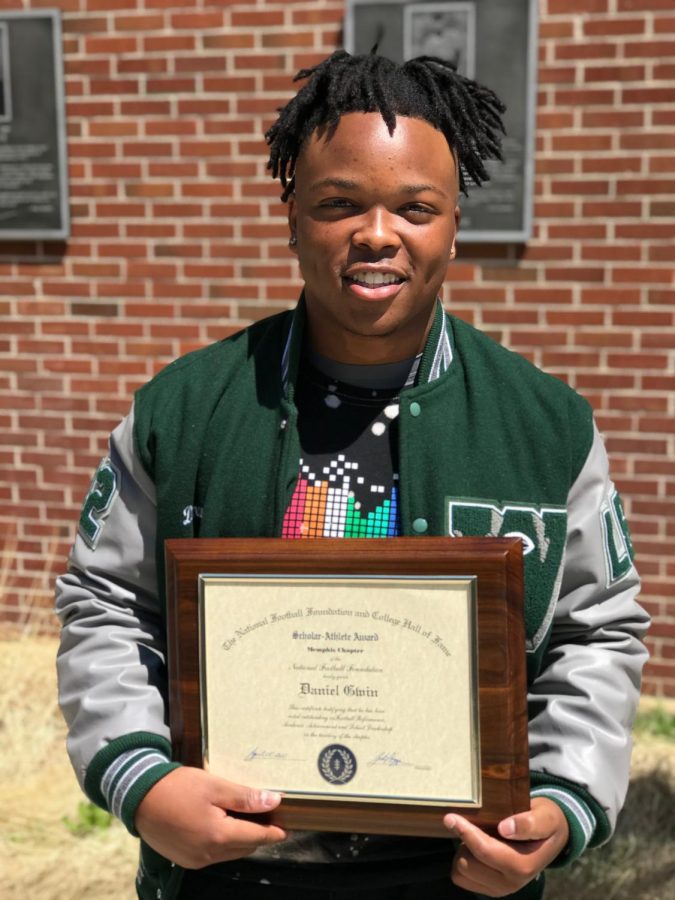 Dedication, determination and discipline are needed to make a successful scholar athlete, and Daniel Gwin (12) exudes all three of these traits, earning him the 2020 Scholar Athlete award by the Memphis chapter of the National Football Foundation. The National Football Foundation & College of Fame is a non-profit educational program that aims to educate and award student athletes for their positive contributions as well as scholarly and athletic abilities. The Memphis chapter reaches North Mississippi and most of West Tennessee and applies to all football players in the area — not just Shelby County Schools. Only a handful of awards are given each year, and Gwin happened to be the player that stood out the most regarding community involvement, academics and his skill in football.

“Chuck Melenski — who is actually a White Station graduate — is very heavily involved in that organization,” head football coach Reid Yarbrough said. “He was proud to call me and tell me that [Gwin] was one that was selected … and wanted me to pass on the word to Daniel, and I told him that it would probably mean more from him if Mr. Melenski called him. So, he called [Gwin] and let him know and did a little ceremony in the courtyard … A representative from the Football Foundation came and brought a plaque and the scholarship information.”

The absence of an actual season this year took a toll on captains like Gwin and their team, especially during their months of practice in the summer. However, the leadership and guidance of Gwin and his fellow captains still had to be shown with the same vibrance and energy as any other year. They promptly got to work with conditioning and slowly grew ready to take on the season despite the uncertainty. With new faces and new circumstances, Gwin and other leaders on the team helped each other to expand their skills and bond with each other despite the odds.

“It was really difficult for a leader on the team, especially [with] not knowing everybody, getting a lot of new faces and a short amount of time to get ready,” Gwin said. “[Hard times] are always an opportunity to improve as a leader and a follower. I learned a lot as far as how to bring a group of people together in a short amount of time…It was not very favorable this year in terms of football.”

The team building that Gwin had to maintain during his years as a captain was not in vain. From his experiences with his team and coaches, he learned the value of connection is something that gets a team through a season and a person through hardships. By fostering relationships with his team and coaches, Gwin blossomed into a better athlete and a more confident leader. Throughout his time as a football player, Gwin has made strong connections with his teammates who continue to inspire and push him to be a better player and leader, and these connections became the fuel for him to continue to play and excel in the sport.

“My reason for continuing to play was really just to be around those people, all my teammates, all my coaches and to earn the opportunity to play and continue playing in college and hopefully the next level after college,” Gwin said. “Football has taught me a lot … Once my junior year hit, I think that’s when it started to set in … Ever since then, I’ve been committed to it and dedicated myself to getting better as an athlete and as a student of the game.”

Gwin was always a dedicated player, and according to Yarbrough, he constantly improved with each year, but what made him stand out from the others was his time management skills that allowed him to excel in every aspect of his life, inside and outside of school.

“Daniel did well academically and did well in football but also held down a job for several years and was still able to manage all of those things,” Yarbrough said. “That shows that he has not only the time management skills but other attributes necessary to maintain a job, still play football and excel at White Station at a high level. We really like Daniel as a leader, and we like his character … He’s somebody we thought represents White Station well in school and out of school as well.”

The feeling of gratitude is mutual between both Gwin and his coaches, and this support led to the success of both the football team and Gwin. He committed to Millikin University in February of 2021 and plans to major in engineering. He hopes that he can have a strong freshman and sophomore season and will be able to transfer to a bigger school. Despite his big plans for his future, Gwin recognizes all the life-long friendships he has made in and out of football and recognizes how much it has helped him grow to be a better athlete and person.