Chen and Birbo’s rise to the top 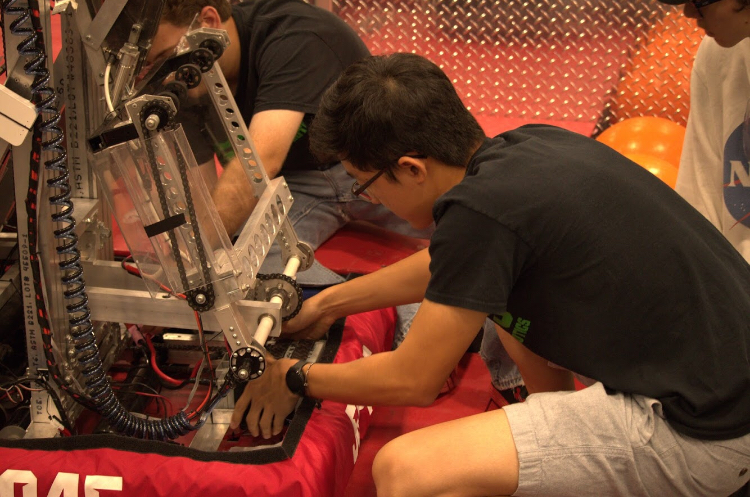 Completing a last minute touch-up before a match, Andrew Chen (12) changes the battery on team 5045’s robot. The match was part of an off-season competition known as the First Robotics Challenge in Arkansas.

Andrew Chen (12) and Bereket Birbo (12) have a few things in common. They have each taken over 15 Advanced Placement courses, have been part of various extracurricular activities and are both attending top ranked universities post-graduation.

What sets them apart from the rest of the class of 2021 is that they are the top two scholars—Chen, valedictorian and Birbo, salutatorian. In two seniors paths’ to the top, they proved to be filled with discipline, motivation and a love for a good challenge.

“I actually did not expect to be salutatorian at all … it just kind of happened,” Birbo said. “When I saw my transcript, … I saw ‘two’  and I was like ‘did they calculate this wrong?’ and I tried to recalculate my GPA … I was not expecting it at all.”

During her four years of high school, Birbo was involved in science olympiad, biology olympiad, HOSA and Bridge Builders Change.  Out of all of the classes she took, her favorite was AP Biology with Dr. Madu.

“It was a very enjoyable class … the teaching style was engaging,” Birbo said.  “I feel like I was encouraged to actually learn the content instead of just pass the class. Just the overall experience was really great.”

For Chen, cross-country filled his schedule during the fall, while robotics took over in the spring. Chen has been a member of the robotics team since his freshman year, and for the past two years, he was captain, programming leader and build team leader, which made for long nights during the season.

“[For] robotics, during the competition season we would be at school until like maybe 7 or 8 p.m.,” Chen said. “That was definitely pretty hard to get my homework done, but I just [tried] to do whatever homework I could during school and during lunch. Whenever we had some free time in class, I would just be doing homework. And then when I got home, I would just eat and then do homework until maybe 12 or one in the morning.”

Birbo created a challenging workload for herself because of her desire to obtain a good education and have a successful future. With this motivation, she was able to tackle her assignments for her many advanced courses.

“For me, motivation comes in waves,” Birbo said. “ … So when you find motivation, … just  work and when you don’t have the motivation it’s okay, but don’t get behind on your classes and don’t fail because that will hurt you in the long run … basically it’s okay to allow yourself leeway, but when you have motivation … run on that wave, run on that motivation to get all your work done.”

The spring of 2020 was a difficult time for Chen, who had seven AP exams to study for in subjects that were not fully taught due to the coronavirus pandemic. Studying alone was something that helped him throughout high school and especially during his AP time crunch.

“You’re going to have to do a  lot of self-studying when it comes to APs at White Station,” Chen said. “I use Khan Academy a lot, depending on the subject there’s some pretty good websites to learn from and review books – those helped a lot.”

When not studying for classes, Chen was a part of a few school organizations, one he wished he had stuck with was Model UN.  The club develops public speaking skills and would have given him an opportunity to spend time with friends.

“Go for any opportunity you see that you think would be good for you,” Chen said. “…  I could’ve pursued it [Model UN]  more, but I just didn’t really want to, but in hindsight it would definitely have been really good for me. And I’m sure there’s a bunch of other clubs I didn’t really look into that could’ve helped me a lot too.”

Restricting himself from distractions such as YouTube and texting helped Chen keep up with his assignments. However, even as valedictorian, Chen has had his fair share of low moments – like any other student.

“I have just as many shortcomings as the next person,” Chen said. “I’m not like this perfect student. I procrastinate a lot too, and I’ve missed assignments before. I’ve failed tests before.”

After taking most of the school’s science classes and being part of the robotics team, Chen aspires to continue on this path in his future. He has been accepted to Georgia Tech University and is currently on the waitlist for the University of Pennsylvania.

“I plan to major in either computer science or mechanical engineering,” Chen said. “And then getting a Masters or Ph.D. in robotics … either working at SpaceX or Boston Dynamics or Google … something like that.”

Birbo, who will be attending MIT in the fall, has plans to explore biology and computer science studies but is open to what her future holds. Believing in herself and her goals pushed her to become MIT-bound.

“Reach for the stars,” Birbo said. “It’s okay to have high aspirations … make sure your goals are truly yours. Don’t compare yourself to other people and don’t lose hope. At least for me, it’s really easy to lose hope. A lot of the things that I’ve come by are things that I never expected because I just didn’t have hope in myself, but don’t lose hope. Reach high … you’ll get there … do well in what you want to do.”

For most students, becoming one of the top two in their class is not something they believe will happen to them. Chen and Birbo are no different, and despite their years of hard work, both were surprised at their honors.

“I may seem like a distant figure, but I’m just an average person,” Birbo said. “Anyone can do this … if you’re really passionate about your education, challenge yourself and take the classes that you want to … don’t be scared.”