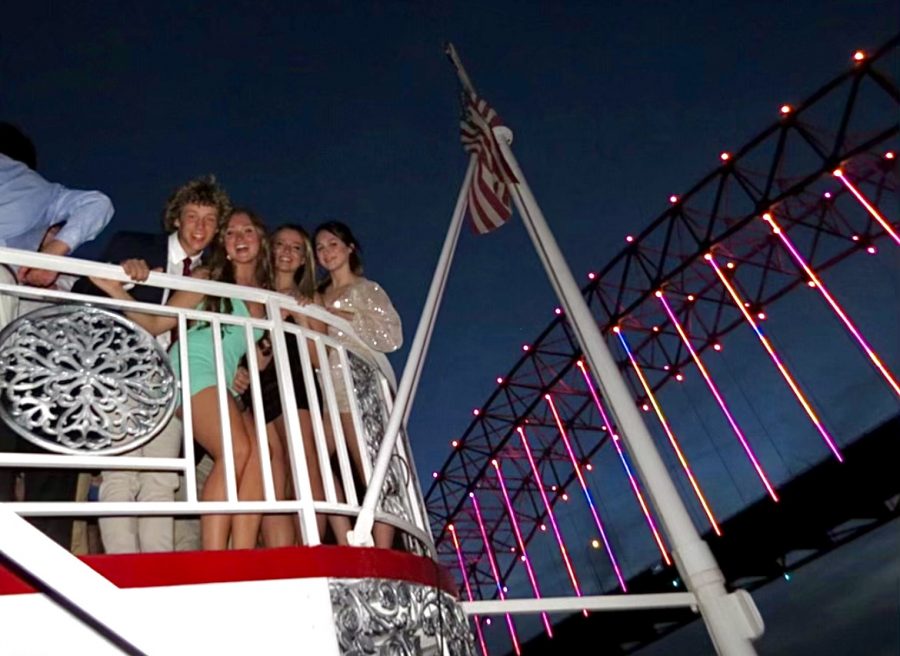 At the prom held by Abby Kellett (11), high school students from all over Memphis got together for their prom. Kellett mentioned that while safely following CDC guidelines, some students were able to reconnect for the first time in over a year.

With the rush of dress and suit shopping and finishing touches with hair and nail appointments, the prom season buzz is in the air yet again, except this year things are looking different. Barely being able to organize a graduation, hosting a prom was out of the question for Principal Carrye Holland, leaving some students who were unwilling to give up the right of passage of attending prom to take matters into their own hands. Abby Kellett (11) planned a prom open to students from many different schools, while Anna O’Guin (12), Lynx Yuan (12), Bailey Kennedy (12) and Lily Zeng (12) organized a prom exclusively for White Station seniors.

On May 21, Kellett planned a prom on a riverboat that was open to students from schools throughout Memphis to ensure she would get the full high school experience.

Her desire to attend her junior prom did not just start in high school. She — along with many other teenagers — had been dreaming of their prom night from a very young age.

“I’ve looked forward to it since I was little, so the anticipation has made it a very important event to me,” Kellett said. “Because of COVID, I didn’t think we’d get the opportunity, so I decided to make it happen for myself.”

The prom was a success not just in Kellett’s mind. Many attendees appreciated her hard work that made the world seem normal again.

“[It was] fun, exciting, normal and liberating,” Annie Wilford (11) said. “For a second, I forgot COVID was even a thing, and it just felt like I was back to normal life. It just felt so fun seeing people who I hadn’t seen in over 1 year.”

After missing out on their whole senior year and much of their junior year, O’Guin, Yuan, Kennedy and Zeng refused to miss out on their prom experience too.

“After having prom canceled my junior year coupled with not being able to have much of a senior year, it made having prom this year that much more important to me,” O’Guin said. “I thought our senior class deserved to have a prom, and I figured a lot of people felt the same way about it, so when my friend Bailey came to me with the idea of throwing a real prom, I immediately wanted to jump in and help plan it.”

On June 11, these four seniors will be hosting a prom on a riverboat, holding the event not just for themselves and their friends but also for the rest of their class.

“I hope that our prom fulfills everyone else’s dreams of prom … [and] provides seniors with at least something positive and fun from this year that they can look back on years from now,” O’Guin said.

Even for such an organized group of students, many problems arose in the planning process: one being the issue of payment.

“For a good while, we weren’t sure if we were going to have enough money to pay for the venue,” O’Guin said. “We had to do a lot of calculations and recalculations; however, with an increasing number of ticket sales as time passed and with the help of a GoFundMe that raised about $1500, we were able to cover all the costs.”

Liability presented another potential problem, but with the same determination, the prom planners pulled through, coming up with a solution just as distinctive as the unprecedented situation they were in.

“We had to think of different ways to ensure people weren’t going to hold us or Memphis Riverboats responsible for anything that could happen,” O’Guin said. “We ended up creating a unique system for guests to do right after they get their tickets approved on the boat that would ensure we wouldn’t be held accountable for anything.”

In addition to the challenges of planning their prom, these students tackled another responsibility: hosting a prom dress drive for students in need of proper prom attire.

“Kendra Sandlin (12) reached out to us about having one because she had some extra prom dresses she wanted to donate,” O’Guin said. “We thought it was a great idea, so we had both a dress drop-off and donate date and a separate try-on and pick-up date. We got a lot of dresses on the drop-off date, but few people came to the try-on date.”

Although the Class of 2021 did not get the chance to have a normal year, many seniors appreciate getting to at least have the opportunity to reunite at prom.

“Especially after this year where we haven’t been able to see each other and hang out, I think it’s important to have one big send-off to hang out with your friends before we all go our separate ways,” Emily Totty (12) said. “Just seeing the people in our class for our AP testing, you could tell how much everyone missed each other.”