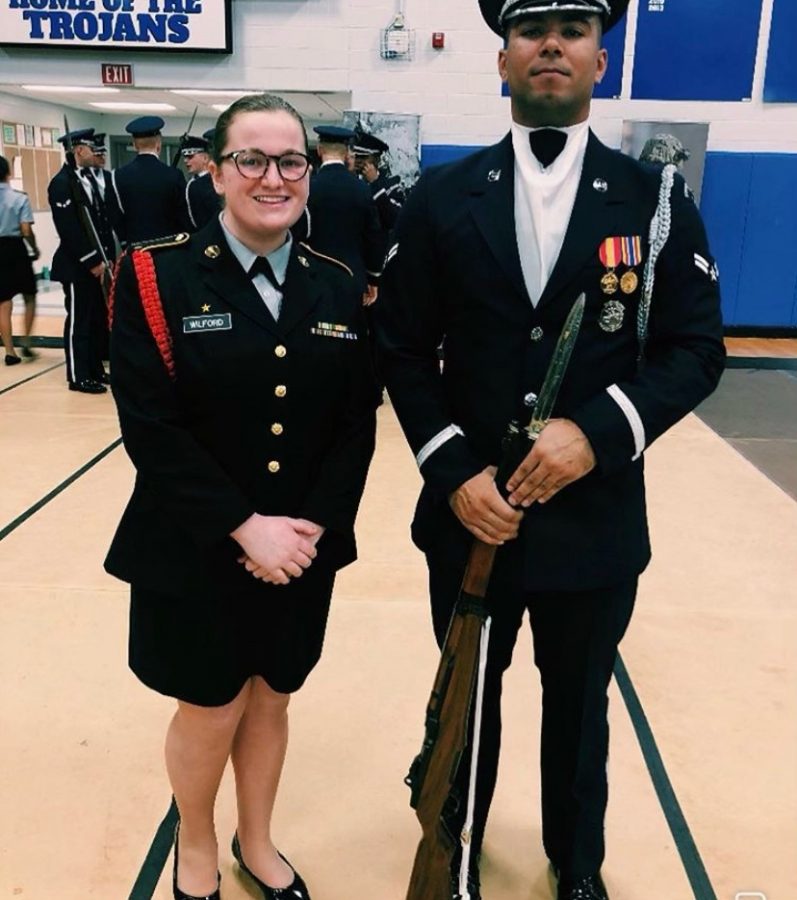 Annie Wilford (11) (left) serves as the deputy commanding officer of the Spartan Battalion. Through JROTC and other clubs, Wilford has discovered an interest in politics and law which she hopes to work in after serving.

Drums flourish and trumpets blare as the future soldiers of this country march line by line on the fields of the United States Military Academy. For many high schoolers joining the military and serving the country has been a life-long dream. Whether students enroll in a military academy, a Reserves Officers’ Training Corps (ROTC) program or directly enlist, their future will be filled with perseverance, vigor and discipline.

The pressure of figuring out a path after high school is something every student shares. The military offers students a period after graduation to determine their career interests while also receiving housing, income, education and other benefits. With family ties to the military, Annie Wilford (11) has always gravitated towards a future in defending this country.

“I think the military is a great career stepping stone,” Wilford said. “It’s great for you to figure out what you want to do and be able to have secondary education opportunities that you wouldn’t be able to if you took a ‘normal path.’”

With aspirations to serve, Chris Phebus (12) is attending the United States Military Academy West Point. Since the fifth grade, Phebus has learned many important skills from Boy Scouts and Junior ROTC (JROTC) that have prepared him to achieve his dreams.

“The more I looked into West Point and their programs, the more I realized it’s where I should go,” Phebus said. “As soon as I swear the oath on the first day at West Point, I become a soldier in the U.S. Army.”

To directly enlist in the military, students are not required to have an established idea of a future career. This attracts many to become active-duty soldiers. Austin McCarthy (11) plans on joining the Marine Corps after graduation and hopes to begin his career in the Department of Defense detonating and disposing of bombs.

“I’ve always felt led to do military service after high school whether it was only one full term of service or if it became a career,” McCarthy said. “I’ve always seen that as an honorable pursuit …”

Many students that are planning to enlist have been in JROTC at White Station since freshman year, following the JROTC motto: building better citizens for America. Cadets have been trained to do just that, better themselves in order to better society.

“[JROTC] has taught me leadership in myself. Finding out who I am through figuring out how I am as a leader was huge,” Wilford said.

It’s no secret that the military is mentally and physically challenging, thus requiring selflessness, determination and courage from its soldiers.

No matter what path a student takes, every soldier has one goal: to protect and defend their country.

“For me, being a better citizen means me wanting to better America. Even if I disagree with some things the military does, having an active role in those things means I can influence those decisions,” Wilford said.