The reality of diet culture on social media 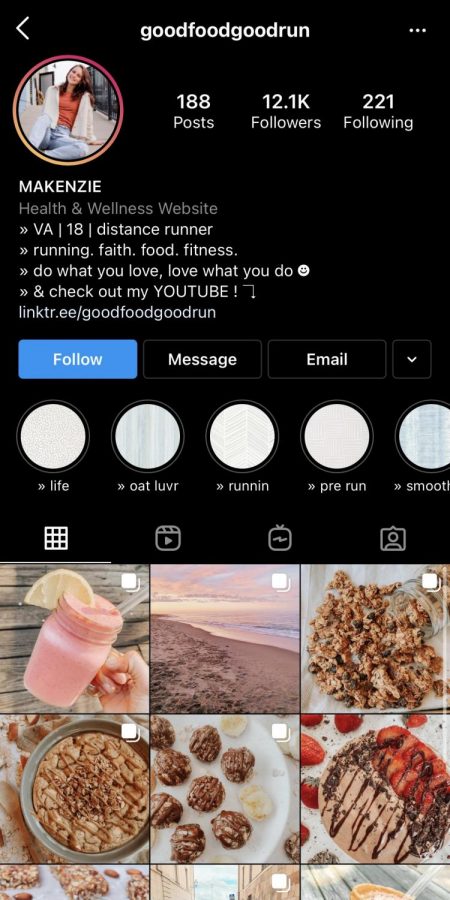 A distance runner learned through running how important it is to have the right foods, and in order to inspire others to be healthy, she created the Instagram account @goodfoodgoodrun. She prides herself for having a page that promotes healthy and enjoyable lifestyles.

Every body works differently than others, and there are healthy and unhealthy bodies of every type. If this is a widely accepted fact, then why does society still force the unrealistic idea that being “skinny” is the only way to be healthy? If society is as progressive as it claims to be, why are unrealistic health standards paraded around social media? The answer is that we live in a country fueled by diet culture, where insecurities are created and profited off of through capitalism, and everyone is taught at a young age what they are ‘supposed’ to look like through the media.

Everyone has heard the phrase “love yourself.” Diet culture flourishes on the idea that there is a certain way people need to look in order to love themselves.

“[Diet Culture] is the societal need for people to be thin,” Alexandra Doty (11) said.

A Huffington Post poll discovered that about 60% of people ages 28-73 were more self-conscious about their appearance because of social media in 2017. Now imagine how high this percentage would be now, four years later, with a younger age group like 16-21.

“Social media, especially for children, is very toxic and has caused more damage than good in many cases,” Doty said. “Since children are on every app, [health influencers] should not be exposing fasting or overworking out since kids do not need to do that.”

As younger generations get access to technology sooner and sooner, children are presented with the “beauty standards” they have to live up to at a younger age. Imagine comparing your middle school figure to influencers’ like Sommer Ray’s; it is a ridiculous comparison, but pre-teens scrolling through Instagram do not recognize the ludicrousy.

“Culturally, there is always a new fad diet to try that tells women insane tactics to lose weight as fast as possible. In doing this, we teach girls bad habits like eating disorders just so they can fit society’s ‘standards,’” Olivia Morgan (10) said.

Many websites claim that sticking to an advertised routine can lead to the loss of a certain amount of pounds in a certain amount of time. Besides the fact that these sites are often giving out false hope, think about the endless cycle they are putting their viewers through: first start with this diet, and if that does not work, try a juice cleanse, and if that does not work wait until 3 p.m. for your first meal everyday, and then try all of it together on top of overwork out plans.

“Health pages fuel eating disorders by showing pictures of them before and after recovering from an ED,” Morgan said. “While encouraging others to recover is great, showing pictures to your following of your emaciated body doesn’t help others with eating disorders as much as you think. They see that as a goal or a competition of ‘how long can I starve to look like this?’”

In an attempt to become happier with who they are, people playing into diet culture by dieting and fasting can get caught up in the cycle and be left with eating disorders and a toxic relationship with food and themselves, but that is not the purpose or reality of dieting.

“In the end, [eating healthy] is supposed to make you feel better overall with your mind and health,” the owner of health and wellness Instagram account @goodfoodgoodrun said.

It does not help that “health tips” often preach false, unhealthy methods to “transform your body.”

“Promising someone that they will lose ten pounds in a week is just unrealistic and incredibly unhealthy. Someone with rock hard abs telling the majority of America that they can look like them in a week is inherently lying,” Morgan said. “Our bodies look differently and work at their own pace.”

With this being said, there are also many pages that cater honestly to the average person.

“I suffered from an eating disorder since I was about 12, so seven years or so, and it was honestly the hardest thing in the world to choose recovery,” Isabella Seminatore, owner of the Instagram diet page @onestrongstrawberry said. “I thought to myself how I wouldn’t ever wish this upon anyone, so I decided to start my platform to help inspire others and give them reasons to keep fighting … and let them know they are never alone.”

It is important for influencers to have genuine intentions because social media content can have more impact on viewers than many might think.

“It is hard to realize sometimes how much influence you have on other people’s lives because you don’t see the impact yourself,; you just see numbers in the form of likes, comments, etc., and you don’t get to see whatever you put out there in action in another person’s life,” owner of @goodfoodgoodrun said.

Though there are some accounts like @goodfoodgoodrun that are truthful, they can easily be insensitive to people who struggle with their relationship with food. Just by posting healthy recipes and not showing cheat days can lead followers to feel overwhelmed to maintain a perfect diet. Many influencers do not understand that even before and after pictures of their body can pose as “thinspo” or inspiration to be skinny for those with eating disorders.

So what can teens and young adults do to combat diet culture? The first step is to address the unnatural diet culture we live in. The second is to know there will always be false advertising and unobtainable body goals along with trustworthy pages showing realistic goals. The third and possibly hardest step is to learn to accept your body and not compare it to others’.

“[Health pages] used to make me insecure, but now I have accepted my body and love it. That is the difference in a child’s vs a young adult’s mindset,” Doty said.