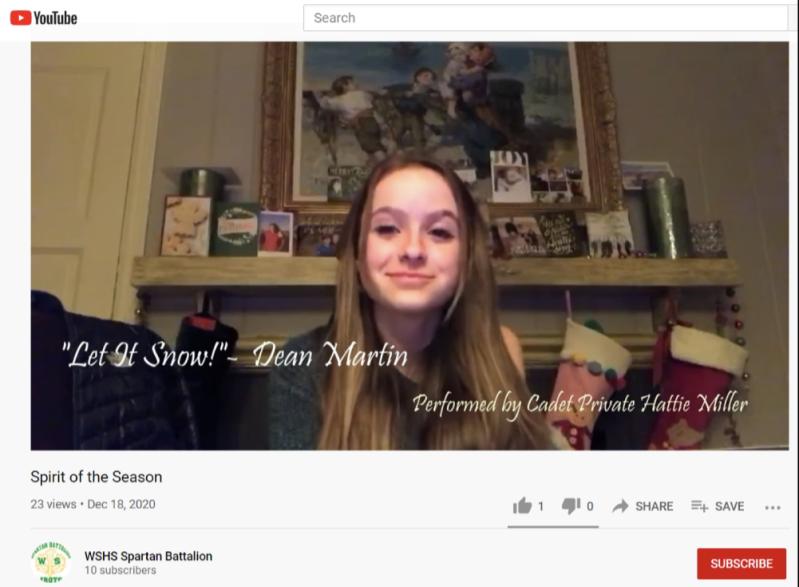 Spirit of the Season, Treble Corps’s latest video, features a collection of cheery, winter holiday themed songs. Their channel, “WSHS Spartan Battalion”, is easily accessible and can be found on Youtube.

The camera flashes red, and JROTC’s acapella group Treble Corps begins to sing, echoing a warm melody throughout the venue. Most students at White Station are familiar with the JROTC program but may have not heard about their newest installation of an acapella club. Treble Corps started late last year and has expanded in members and talent since then. One member and singer, Katie Wong (10), helps demonstrate the club’s purpose and its distinctive qualities.

“Treble Corps is an after school club within JROTC where you can explore the different genres of music and pay respect to the United States while utilizing your voice in ways you haven’t before.” Wong said.

The club  practices and performs after school, and  has dedicated itself to creating monthly acapella videos on its Youtube platform.

“All of the videos we have done took about a week to practice and produce,” Wong said. “A lot of the songs we sing are mainstream so we don’t have to worry a lot about how hard it is to learn or the technique used to sing the song since we all get to sing our songs of choice. The videos usually take multiple tries depending on how elaborate we go on them. Afterwards, we get another JROTC student to help us edit the videos together.”

A lot of time, practice and planning goes into making videos so that viewers can enjoy the songs that the cadets pour their hearts into. Sulan Roachell (11), commander of Treble Corps, organizes the videos and encourages other members to create to the best of their ability.

“At our weekly meetings, we decide the general theme of each video (i.e. our Holiday-themed video), then each person picks their own song that goes with the chosen theme,” Roachell  said. “Some people prefer to do duets, there aren’t really any restrictions. So far, we only have one video out, but we plan on uploading one video per week with the alternating themes of JROTC one week and a theme chosen by Treble Corps members the other week.”

Making their videos accessible is important to the Treble Corps, so they started sharing their efforts online to show students, parents, and staff what they’ve accomplished.

“Students can watch our videos on the WSHS Spartan Battalion channel on Youtube,” Roachell said. “If you’re interested in keeping up with Treble Corps, I definitely recommend subscribing!”

The club is not just about singing, but also about making new memories, friends and experiences while doing what they love. Members like Khylen Murray (10) found that peer to peer socialization is the key to what makes Treble Corps a special group of people.

“If I had to pick my favorite thing, it would probably be everything; meeting new people this year who wanted to join and bonding with them as well as singing with them was all so fun,” Murray said. “It wasn’t the same as last year, but it’s still fun to hear them when our videos are done and everything.”

Treble Corps is open to new members and hopes that anyone interested will join  to help create meaningful music. The club strives not only to sing for an audience but also to create long lasting bonds with each other.

“We started this legacy and we need you to keep it going, don’t be shy or scared you’ll fit right in because we are very accepting,” Murray said. “We are always here for each other no matter what because we know things are hard, but we are here to lend a hand so join and enjoy your time together.”