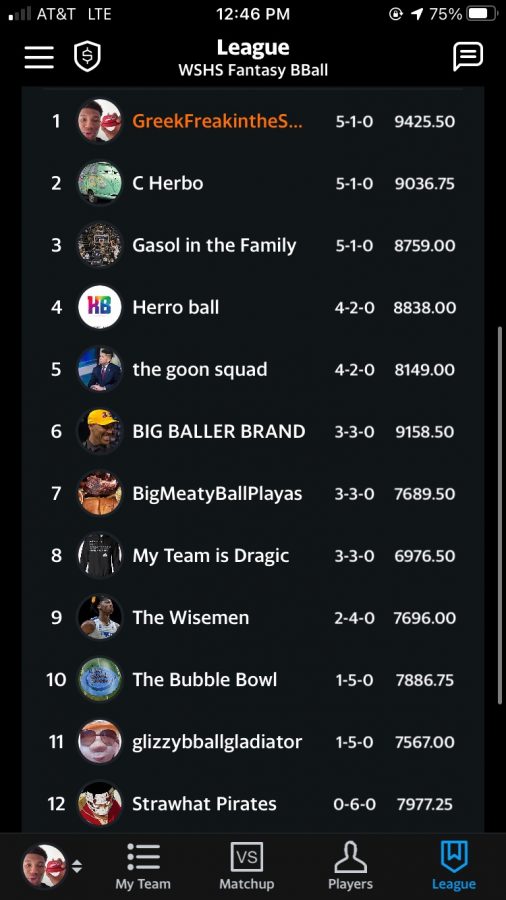 Pictured are the current standings and several matchups for the WSHS fantasy basketball league owned by Zachary Palmer. Players are ranked first by record, and then by the total amount of points earned so far. Rankings change each week.

Fantasy football and basketball provide students with several utilities: an incentive to stay engaged with sports events, an easy way to spend time with friends and sometimes even a monetary prize.

Students can join leagues by invitation, with some leagues having pay to play policies. It is common for students to play both fantasy football and fantasy basketball since the seasons have little overlap. Players acquire a certain status based on the outcome of real games and the league rules.

“Basically, before the season [begins], you draft a team based on players that you think are going to do well in real life,” Erick Gonzalez (10) explained. “And depending on how the players perform in real life can affect how well your team does in fantasy.”

Leadership roles are available as well. Responsibilities range from encouraging others to join a new league to monitoring trades to ensuring that players are making informed decisions in their drafts. Zachary Palmer (12) has been playing fantasy sports since the seventh grade, and has taken initiative within his own leagues by becoming commissioner.

“Being a commissioner, first, you have to get all the guys committed to playing, then organize the draft that we have every year, and get everybody’s schedules down,” Palmer said. “So, just making sure that there’s no collusion and making sure that everyone’s setting their lineups.”

An important aspect of fantasy sports is the contact with other players in the league. Zoom meetings for drafts and other events allow students to reconnect and engage with each other.

“The fantasy basketball team for White Station, we had a zoom call for the draft night. I hadn’t seen those guys’ faces since March, so that was definitely a way to get connected with them,” Palmer said.

While a monetary prize is sometimes included, many students play solely for the incentive to stay involved with current sports, and to gain bragging rights amongst their friends. Gordon Brody (12) plays fantasy basketball with a group of friends and notes the importance of the incentive to keep engaged with sports.

“It’s fun for me because I don’t watch basketball that much but it keeps me involved in it because I have something invested- I want certain people to do well, so it keeps me interested in it,” Brody said.