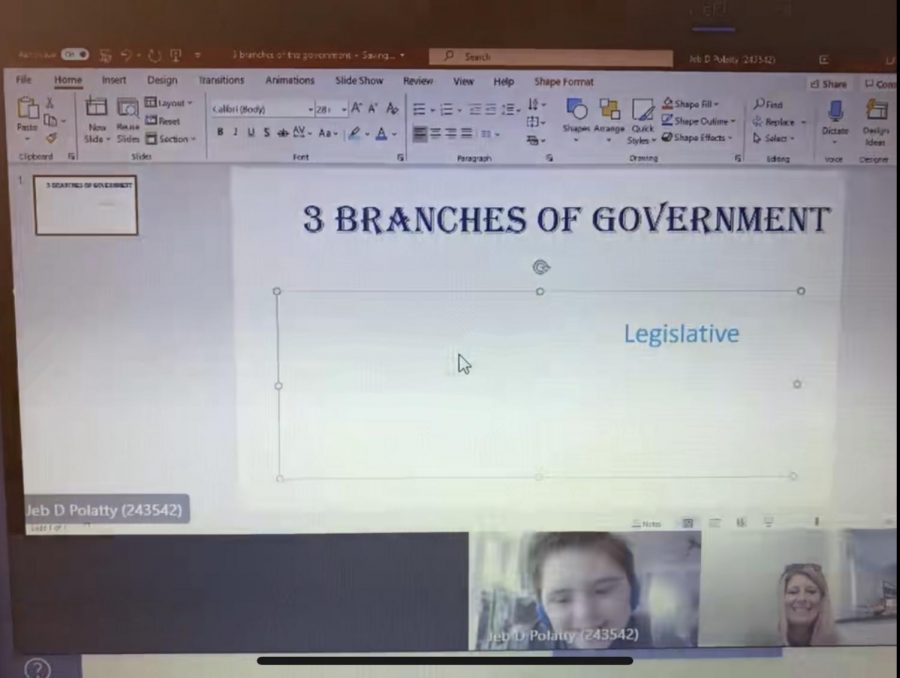 Special education teacher Laurie Roberts teaches Jeb Polatty (9) how to maneuver Microsoft Teams. Connecting with the special ed students is one of the more difficult aspects of virtual learning, but Roberts and Melissa Anderson, another special ed teacher, make it work.

Teachers, administration and students alike have grappled with the challenges virtual school presents. Few, however, have struggled with and overcome as many obstacles as the special education (special ed) department in the last three months.

“It’s been a tall, tall challenge,” Brian Cayolle, father of Jude Cayolle (11), said. “I have nothing but respect for all these teachers, all these teachers trying to do this, it’s been… a learning experience. I think that they have done a great job trying to adapt to this whole situation.”

The special ed classes have fallen victim to many of the struggles of online school, such as lack of connection to the students.

“I think, just all-in-all, it’s that whole concept of not being able to be one-on-one with anyone,” special ed teacher Melissa Anderson said. “It makes it hard. Even when you go into a channel, it’s still not the same.”

Not every virtual issue is similar to those of the average student, however. In special ed classes, a student’s condition may prevent them from being able to successfully operate a laptop.

“I’m not sure that they thought through for our students’ needs when purchasing computers,” Laurie Roberts, special education teacher, said. “Some of our students, the lower functioning students, need a touchscreen. It’s hard for them because of their occupational needs, because of their fine motor skills, to be able to manipulate a trackpad…”

In contrast, some students have shown exceptional prowess in handling the devices.

“I do think [the COVID situation] has also allowed [Jeb] to become comfortable with the technology and the skills needed there,” Kelli Berry, mother of Jeb Polatty (9), said. “He has actually really amazed us and his teachers by how well he has taken to using the platform… He, at first, had to help teachers; he was figuring out things on the platform before they could… that piece has been amazing to see.”

Many parents have become more involved in their child’s education in order to keep their child focused and on task. Although the circumstances that brought the parents into the picture were unfortunate, their increased participation has been beneficial in more ways than one.

“…We have a lot of parents who really have dedicated themselves to helping their students and it’s worked out very well for them and even for me,” Anderson said. “…It’s something that I never thought would be a possibility.”

Much like how the teachers have caught a glimpse of the parent’s life, the parents can see how their student’s class operates.

“Now, I see her in class with her actual teacher,” Alexandra Pappas, mother of Mia Pappas (12), said. “And it’s nice to see how they actually run the class and how they engage the students and all the things that I would have no idea… It’s enjoyable to know how hard the teachers work… It’s amazing because the kids are on so many different levels and they’re still engaging them all.”

But keeping everyone constantly engaged comes at a cost. Not only do the teachers have to convert materials from paper to PDF, but they also must consider the individual special needs of their students.

“Probably three times more [time spent preparing for school], at least…” Roberts said. “At the beginning, it was learning how to operate Teams better and ways for parents to be able to manipulate it better, but I think that part has subsided a lot because parents and students are better at it now. Now it’s more like finding some really good programs that we can use to teach; like now it’s working with those lower functioning students and finding ways to meet their needs.”

Additionally, parents have an increased workload because of virtual learning.

“We get up, do our daily math, and then I sit right next to her, and do my work for work and she’s doing her work for school, and we sit there until lunch and then we get back on after lunch and sit there until school’s out, so it’s seven and a half hours, however long the school day is…” Alexandra Pappas said.

Online school has forced many hardships on the special ed department, but the teachers, students and parents have risen to meet them.

“I can’t applaud the teachers enough because I do think they are trying to go over and above what they normally would do to ensure that kids with different abilities are still learning, that they are still being exposed to the curriculum,” Berry said.