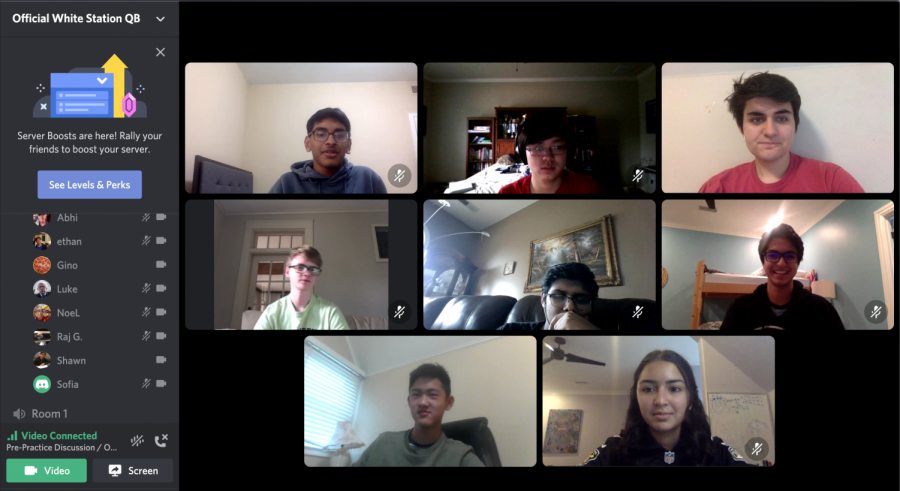 The quiz bowl team practices after school using Discord. Despite the cancellation of all in-person activities, the team continues to practice and compete online.

Quiz bowl, not to be confused with knowledge bowl, is a team-based buzzer competition, pitting two groups of four against one another. Generally, a quiz bowl competition runs in a tournament format, where each participating team plays multiple games, and the team with the winningest record comes out on top. With a wide variety of possible questions and many talented opponents, the team practices every week for two hours, in addition to each member reviewing information on their own time.

“In order to do better at quiz bowl, I’ve got to spend time learning new stuff,” team captain Gino Giorgianni (12) said. “I watch a lot of educational youtube videos, documentaries…I stay on current events a lot.”

In a single match, there are 20 tossup questions, and the first person to buzz in answers the question. If the tossup is answered correctly, that participant’s team earns three bonus questions, in which the whole team confers together to answer. At the end of the match, the team with the highest score wins, and the best team at the end of the tournament home the hardware.

“We want to represent White Station and represent ourselves, and by doing well at these competitions, we get to do that…” Giorgianni said. “You bring home medals and trophies, and you want to do that to show off that White Station has what it takes.”

This year, in-person practices and tournaments converted to an online format, using the Discord app. This transition comes with the problems dealt with in any online setting, like increased hesitancy, accidental interruptions and difficult communication.

“Obviously, when you’re in person you get to see everybody, and communication is a lot more fluid,” Giorgianni said. “Online, sometimes you don’t know when you’re speaking over somebody, and there’s a lot of stopping. That takes some time to get used to, but it gets better.”

Despite the shift, the team has competed against hundreds of opponents across the nation in three tournaments so far, placing in the top 10 each time, including a second-place and third-place finish.

However, the opportunity to compete and collect trophies is not the only reason that quiz bowl is so special to its members. Through all the practices and tournaments, the team has grown closer together.

“We probably developed our relationships from those practices after school,” Abhi Lingareddy (11) said. “That’s what quiz bowl means to me—those friendships that I’ve made.”

In its entirety, quiz bowl serves as a valuable opportunity for students to expand their knowledge, forge lasting friendships and compete to win.

“It’s a culmination of having fun with friends, but as well as…serving as a place where you can apply your academics and earn prizes for it,” Lingareddy said.