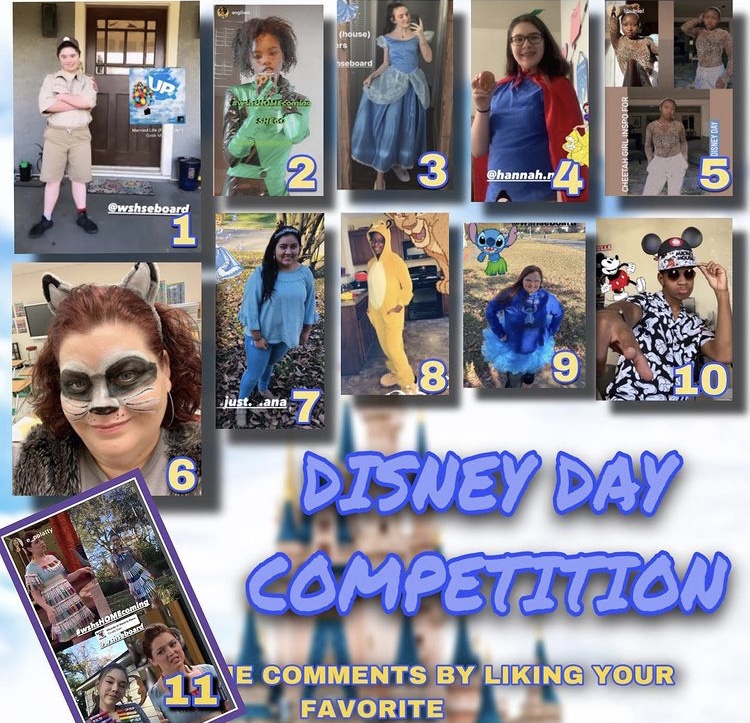 Spartans participate in the homecoming dress-up day by wearing costumes of their favorite Disney characters. Students who participated in dress-up days were featured on the E-board Instagram for the chance to win a gift card.

Crowded football game. Electrified pep rally. Crowned royalty. This year, the traditions of homecoming that allow the White Station community to come together were threatened by the COVID-19 pandemic. But the show must go on. Homecoming planners Dinah Patt (12) and Minnu Reddivari (11) adapted to these unparalleled conditions by creating their own unique plan.

“Homecoming is going to be a Livestream video… Essentially we are getting all this stuff together, like videos of the homecoming court walking out, videos of student performances, pictures of the fall athletes, and we are going to compile all of this into a video that’s going to mimic what pep rallies are usually like,” Reddivari said.

Homecoming week began on November 16, and the video is set to be released in December. One important aspect of the 2020 Homecoming video is the performances sent in voluntarily by students. The ROTC Color Guard rose to the challenge by creating, practicing and finally recording their own routine.

Along with personal performances and recognition of the fall senior athletes, the video includes the nominations for White Station Homecoming Court. Students were elected from each grade for Homecoming Court through online polls and the votes for the gender-neutral title, Homecoming Royalty, will crown the winner.

“What we have courts do is, they’re going to be recording videos of themselves walking up to the camera and striking a pose or whatever,” Reddivari said.  It’s like what you would see in a normal year except they’re the ones who record it. They’ll send it into us and we’ll put that in the video.”

After a surprise nomination from friends, Daniela Lagos (9) found herself picking out a dress and striking a pose for the camera. Lagos believes that her homecoming court experience was more than satisfactory despite its unusual aspects.

“I feel like it was handled well and we took all precautions,” Lagos said. “I mean it would have been better if we did a big thing but obviously we couldn’t because of COVID… that wouldn’t have been possible.”

The decision to forgo any physical activities was not reached lightly. Patt and Reddivari worked closely with administrators, teachers, counselors and students to come up with this pre-recorded homecoming video plan.

“We came up with three potential options for holding homecoming this year. Ultimately though, none of the options involving in-person filming would work due to precautions for COVID-19,” Patt said. “Student health and safety comes first, and we didn’t want to risk anyone getting sick.”

Along with the video, homecoming dress-up days were continued on a virtual platform. Many students participated in Disney day, Opposite day, Character day, 90’s day, and Class Distinction day to be featured on E-board’s Instagram and compete for gift cards.

“It was a creative approach to address the changes this year demanded… with the dress-up days, it was fun to look at the outfits everyone had for the dress-up day contests and vote which I liked best,” Chao said.

Despite 2020 virtual homecoming’s successes, the lack of in-person events left many students, especially the seniors, disappointed.

“I guess I am also a little sad that I’ll never have another opportunity for a real high school homecoming– we probably won’t get to have a basketball homecoming either, so there is definitely an air of sadness hanging around,” Patt said.

Even with the curveballs thrown by the pandemic, the spirit of homecoming was kept alive through continuing the traditions– even if it was not in the traditional way.

“It’s kind of difficult to have fun with school now, like you can’t talk to your friends in class, you can’t do all that sort of stuff in between classes in the hall,” Reddvari said. “By having homecoming this year we want it to be a really big morale booster to students to see that things can continue with the safety measures.”