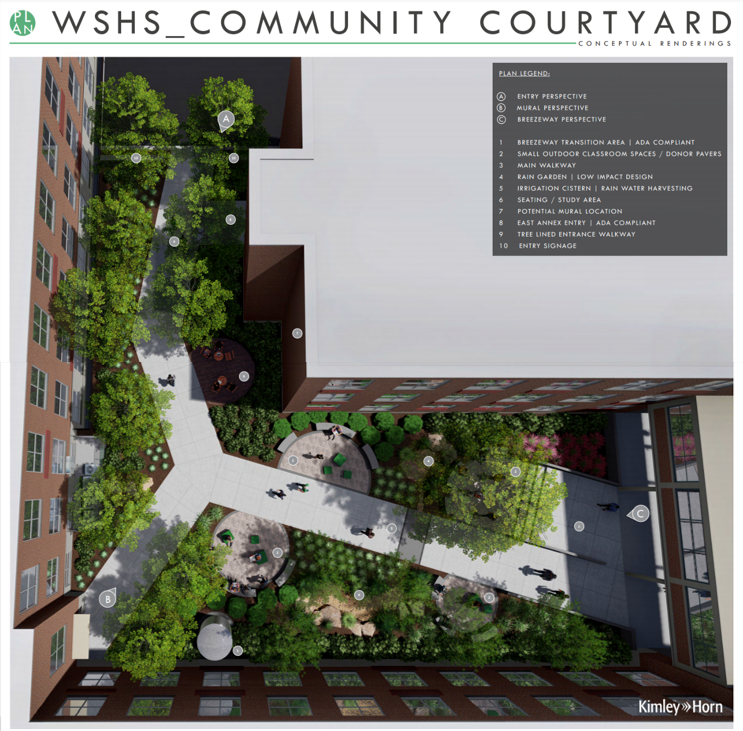 The digital rendering of phase two of courtyard renovations shows the planners’ intents to make this a communal space for students. The bricks bought by donors will be placed inside the circular pods in the center of the image.

Recognizing the Class of 2021’s disappointing senior year, planners for White Station’s courtyard renovations found a unique way to simultaneously celebrate graduating students and fundraise for the school’s ambitious project. Seniors, parents and alumni have purchased personalized bricks to be placed in the courtyard, cementing themselves into White Station’s history and contributing to the school’s beautification.

“I think it’s an admirable way to demonstrate our dedication to their contributions to the school,” English teacher Christopher Robbins said. “Albeit that while they’re home this year, four years is a long time… It’s a wonderful testament to their spirit and their giving to White Station High School.”

Robbins has been responsible for recruiting alumni, parents and students to donate towards this project, and much of his focus has been on the seniors. While current seniors contributed a large percentage in the number of donations, alumni from recent years to decades past have given some of the largest donations. In sum, over 400 donations from November of 2019 to December of 2020 have raised $260,000 of White Station’s $325,000 goal.

“And what we did is we utilized the bricks to raise the funds for the project,” Principal Carrye Holland said. “It [the bricks] has become an honorary thing for the Class of 2021, but it started as a way to fund the courtyard.”

“The big point of this project was to inspire public confidence in what could be done with private money,” Holland said.

The original ambitions of what was dubbed the “Master Plan to Improve White Station” were to renovate the library, construct a STEM building and to create a new entry at the front of school to provide students with cover during rain. While each of these three aspirations would cost millions of dollars, a less expensive beautification project was chosen to inspire student pride. The concrete outdoor classroom, a few art installations and the landscaping were only phase one of transforming the parking lots in the center of White Station into something new. Phase two, though, will transform the location into a vibrant center of life for White Station students.

“One of the things we talked about was building a pretty green space, like having a courtyard, a park or a nice space on the campus,” Holland said. “Phase two is going to be more flowers, plants, trees, it’s going to be less concrete, and it’ll have the bricks.”

Phase two aims to be completed in the spring of 2021 and accessible in the fall. While the Class of 2021 may not witness the results of the large beautification project, the names of dozens of seniors will be engraved into White Station for decades.