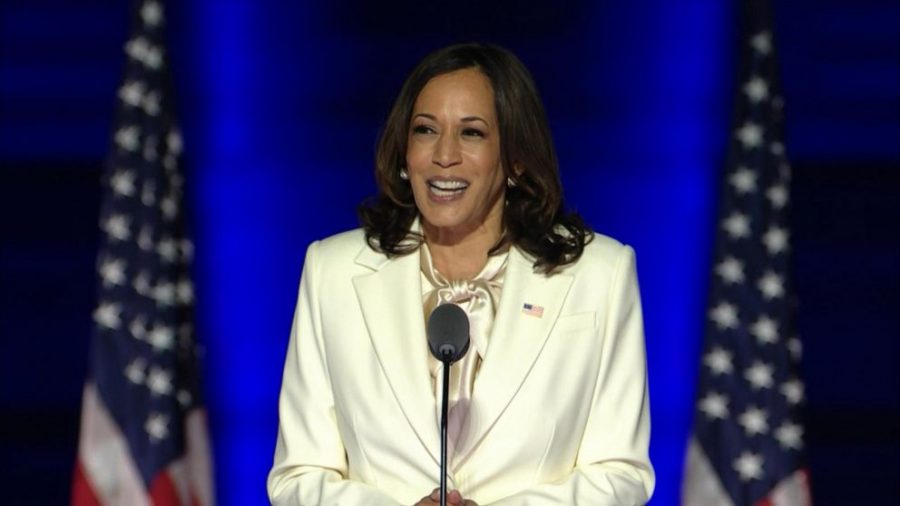 Kamala Harris delivers her victory speech on Nov. 7, 2020. Earlier, she was announced to have been elected vice president by the popular vote.

“But while I may be the first woman in this office, I won’t be the last. Because every little girl watching tonight sees that this is a country of possibilities,” Kamala Harris said in her Nov. 7 victory speech following running mate Joe Biden’s win. Harris, a black and South Asian-American woman of color, made history this year by winning the popular vote for the position of vice president.

Harris has shined a light for women and minorities for years. She became the first female and non-white state attorney for California in 2010, and in 2016 became the first female and non-white state senator of California. Now, Harris is the first woman and person of color to win the vice presidency. Harris’s winning streak gives hope to many people in the United States that have been fighting for better representation.

“It is inspirational for every woman that is non-white…if she can do it, we can do it,” Jacie Trejo (12) said. “She broke down a lot of barriers for women.”

Harris’s victory complements the history of the fight for women’s rights and recognition. One hundred years after women in America first gained the right to vote, the people of the United States have elected a woman for the position of vice president.

“Now we know that we can get these positions high in American [politics], she got elected, we have a chance,” Trejo said. “Now [women] know that they can do it, and it has happened, so why not do it again?”

Harris’s election represents a breakthrough for black and South Asian-Americans in politics. Most politicians have been white males for the majority of US history; to have Harris in a position of high power demonstrates a step towards further inclusion of minorities.

“I think that electing people of color and a woman…as vice president, it shows that we’re going in the right direction and that we can become more diverse and represent more people in America,” Yupapone Phetsavong (10) said.

In Harris’s winning speech, she thanks, “The generations of women: black women, Asian, white, Latina, and Native American women throughout our nation’s history who have paved the way for this moment tonight.” Harris delivers hope and ambition to the multicultural women living in the USA. She reminds them that they have helped the United States advance into the rich country it is today.

“I think it’s a beautiful quote, because she’s just saying what needs to be said,” Narjis Alabes (9) said. “Many people don’t think about women leading in general and especially women of color, and she just told America they can lead.”