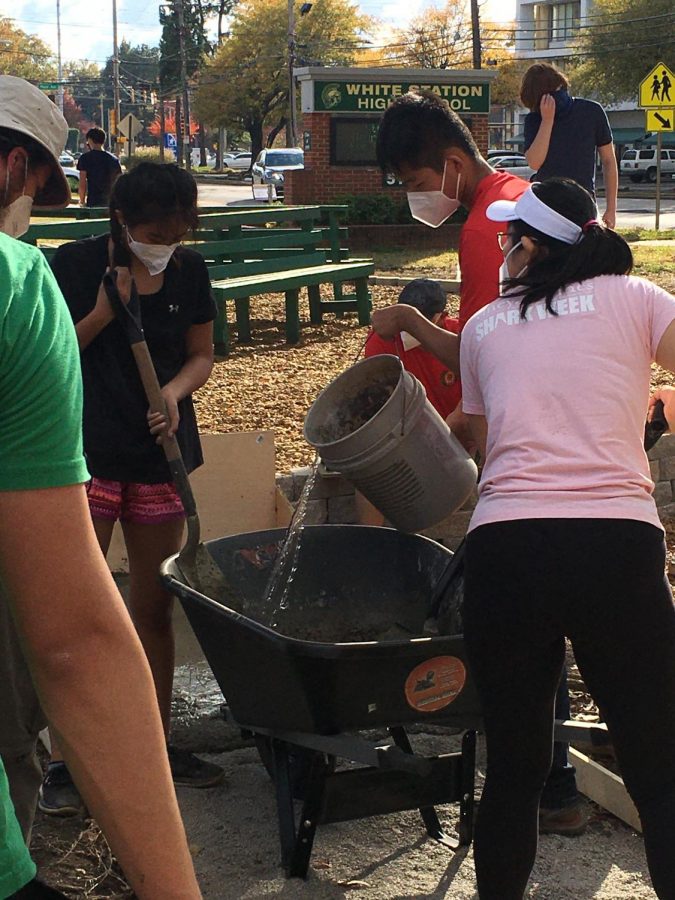 Shawn Meng (third from left) helps volunteers pour concrete for a ramp connecting the platform to the sidewalk. Months of hard work had led to successful completion of the ambitious project.

The sun beats down hard and sweat runs down masked faces. The sound of shovels on gravel fills the air as Shawn Meng (11), soon to be an Eagle Scout, leads student volunteers to build a platform that gives students a dry place to stand when the popular social area next to the auditorium floods.

The project consists of a raised gravel platform that absorbs water. While the finished product is a large, noticeable space, the original plan was not so major.

“The original plan was not to do anything about flooding actually,” Meng said. “It was just to build some picnic tables since the area became unusable. We would make another area that would be usable, but we thought it might be better to fix the problem than try to find another way to get around it. So that’s when I started talking to engineers … and the plan just seemed to get bigger and bigger as we planned it.”

But such a project is not completed overnight — Meng spent months planning and contacting a number of experts to ensure that the project would be successful.

“I contacted… three engineers, an arborist (a tree surgeon), and then architects for the freshman parking lot because I wanted to see how the leveling and the sloping was there,” Meng said. “I contacted a few people on the school board to see if they had plans for the sloping of the area so I wouldn’t have to go out and measure it myself. And then all the people at the different companies who were so kindly willing to donate the materials [stepped in], so that’s Memphis Tech and Gravel and Home Depot, but I got more than enough support, way more than I expected.”

On Saturday, Nov. 7, around 50 students arrived on campus wielding shovels, hoes and even pickaxes. Some set to work on the platform itself: building the support wall around it, smoothing out gravel and digging spaces for benches. Meanwhile, others helped to pour concrete for a ramp leading up to the platform. With a large student turnout, Meng ensured everyone’s safety. .

“Everyone was required to wear a mask, and I brought a bunch of extra M95 masks actually because concrete dust in the air could be dangerous,” Meng said. “Also, I made sure… people were social-distancing during the work, because that’s when you’re breathing your hardest and that’s the time when it’s most likely to transmit; but I think everybody stayed relatively social distanced and wore their masks.”

Although the project itself may have taken months, its impact is sure to last for much longer.

“The project is important to students because… we’re trying to make our school better so that we can have something that we like, that we enjoy when we’re there,” Meng said. “It’s about helping out your school and your community and giving back to what they’ve done for us.”

The project also received support from faculty, a crucial step in ensuring that Shawn could complete it at all.

“It’s a place to sit, it looks nice, but it also shows students that they can contribute to their own campus and it’s just one of those things like, ‘Hey, a student built that,’” principal Carrye Holland said. “So I think it just adds to those opportunities in ownership and saying how students have contributed to their own school.”

A lasting impact of the project is the lessons learned from it, especially for Meng.

“If I had just sat at home and studied for standardized exams or something like that, I would not have learned nearly as much as I did in the process,” Meng said. “And it’s just, sometimes you need to go out into the world and do something, because no amount of textbooks will teach you something like your experience can.”