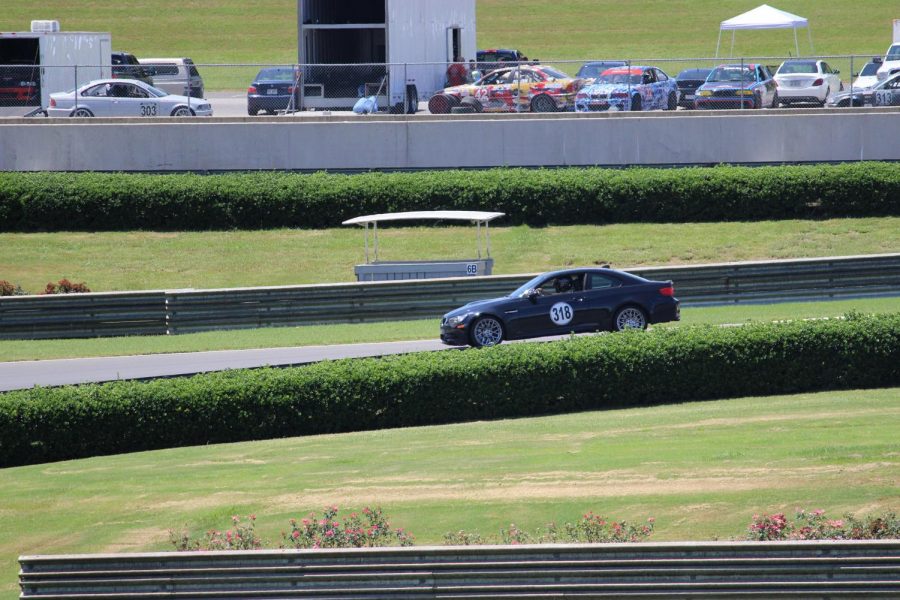 Ethan Shepherd races in an event at Barber Motorsports Park, battling to keep his lead over the other racers far behind. These competitions can attract racers ranging in age from 15 to 75, with an average age of 45 typically.

With fingers firmly wrapped around the wheel and a steady foot on the gas pedal, the driver bounces his eyes methodically to survey his quickly changing surroundings—the track, the speedometer and the accelerating cars in his rear-view mirror. Student race car drivers Ethan Shepherd (12) and Payne Mednikow (11) have fully immersed themselves in the sport of race car driving, committing themselves to learning the logistics, gaining the necessary skills and enduring the financial burdens of the sport.

Mednikow’s interest in race car driving sparked at the age of four when his father, an ex-racer, introduced him to the sport. Since then, Mednikow has taken  the reins of his racing career.

“Basically, my dad really wanted me to learn for myself and find my own feel,” Mednikow said. “I kind of fell to it naturally and I picked up experience over the years.”

For Shepherd, though, experience with competitive race car driving began in August last year. What started as an uncertain novelty quickly transitioned into an exciting hobby as Shepherd advanced in this new activity.

“I’m one level away from being able to be an instructor, which is when you start to get more serious. I’m working on getting to become competitive, but right now it’s just for fun,” Shepherd said.

Currently, Shepherd competes at three tracks: Memphis International Raceway, Road Atlanta and also Barber Raceway in Birmingham, a much higher-end track than the other locations. Because of the distance between Memphis and two of these tracks, racing competitions are typically limited to once a month.

Mednikow, on the other hand, specializes in racing on dirt tracks. Racing at locations such as Atoka Raceway Park in Munford, TN and Batesville Motor Speedway in MO, Mednikow’s vehicle of choice is a race-built, modified car, which resembles a go-kart.

While Shepherd races once a month and Mednikow competes as frequently as every weekend, the greatest demand of this sport is the financial commitment rather than the time commitment.

“It’s not a serious time commitment for what I’m doing, but it is a serious monetary commitment because you’re running through your brakes and your tires,” Shepherd said. “If you want to get faster… you really have to spend money.”

The expenses for invested racers like Shepherd and Mednikow multiply quickly from the need of efficient tires, brakes, engines and gear.

“Everytime we go to the track, we’re taking probably six sets of tires just for different conditions. During the week, we’re putting a couple hundred dollars worth of chemicals on those tires for different track conditions,” Mednikow said.

Shepherd estimates that $1,000 worth of tires could last him four to five races. He also uses his own car, a BMW M3, for competitive racing and is slowly converting it into a circuit racing car.

Though the races boast a valuable cash prize that can help pay for equipment and vehicle management,  money is a secondary thought for most racers.

“Whenever there’s a big-money race, say it’s $1,000 to win or $15,000 to win, nobody cares about the money—not even in the slightest. That’s really what it’s about at the end of the day—proving that you’re the best,” Mednikow said.

While competing against racers around the region, there are essential skills and abilities Shepherd and Mednikow must have to separate themselves from the rest.

“You have to have focus and confidence in your ability. A lot of people…could do it if they had the motivation for it,” Shepherd said. “It takes an incredible amount of focus and a pretty good amount of skill too.”

While there is much room for improvement, both racers have high aspirations for the future. Shepherd hopes to gain the credentials to become an instructor soon and continue in college. Mednikow, on the other hand, wants to continue racing throughout his life and hopes to qualify as a NASCAR racer.