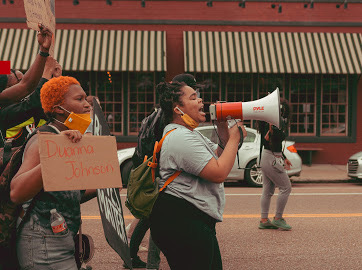 Marching down Madison Avenue, Jordan Occasionally and Allyson Smith lead chants calling for the defunding of police. Their August 1st protest drew both support and resistance from the Midtown community as they travelled from Overton Square to Cooper Young.

“Dedicated to excellence”. The message that encourages Spartans to strive for the best in everything they do. In the cases of junior Talisa Elliott and alumni Allyson Smith and Jordan Occasionally, that dedication is focused on black excellence.

In a summer of protests and pandemics, the Black Lives Matter movement gained media traction worldwide following the murders of George Floyd, Breonna Taylor and countless others. However, the fight for black lives is not new. For 2019 graduate Smith, passion for activism started in 2014 after the shooting of Mike Brown and has grown under the mentorship of Tami Sawyer and her friendship with Occasionally.

On August 1, 2020, Smith and 2017 graduate Occasionally led a peaceful protest through famously gentrified areas, Cooper Young and Overton Square, calling for the defunding of the Memphis Police Department and the reallocation of funds to marginalized communities in the city.  While physically marching is nothing new in terms of civil disobedience, Occasionally recalls the initial nerves of being on the ground.

“Before you get there, there’s all types of bubbles in your belly. But then you get there and you see 50 people that want to help amplify your message —  that have their own stories to be told. And so you start walking and chanting. And the sound of fifty voices, young and old, turn into 100. It seems like you are resilient, even without weapons. And where you once felt weak, you are now stronger than ever,” Occasionally said.

Despite their peaceful methods and dedication, Occasionally and Smith have both experienced the negative aspects of activism, including burn out, police resistance and even death threats.

“This isn’t easy. This isn’t an easy thing to do; it’s not easy putting your life on the line,” Smith said. “It’s always scary, but I try to keep a level head, I try to make sure everyone around me is also safe because I feel like I have a responsibility for them. So like when anyone gets agitated or there’s a situation that needs to be deescalated, I always jump to do that.”

Both Smith and Occasionally have also turned to art as a form of resistance, through slam poetry and singing respectfully. Talisa Elliott (11), on the other hand, has found her call to advocacy in storytelling. Her new podcast The Culture Edition seeks to highlight the talent and drive of her peers and mentors.

“The idea came about three months ago, and it just came to mind. What if I did a podcast?” Elliott said. “We weren’t going to be in school; we were going to be virtual. I was meeting all of these crazy talented people in these crazy high places, and I was like well what if I talk to them.”

Getting her start as a Facing History and Ourselves Ambassador, Elliott was also a panel speaker for the Memphis Grizzlies Amplify Youth Voices this summer. Elliott and other panelists focused on topics such as stereotypes, youth advocacy and, most importantly, their stories.

“Being on that panel also helped me to know when to be quiet. I tend to talk a lot, and sometimes I think it’s a prideful thing that I want to kind of jump at all the questions,” Elliott said. “But it really helped me to kind of take a step back and be like, I really need to listen to all these people’s stories, and I need to hone in on what they have to say because it might resonate with what I have to say.”

Although Smith, Occasionally and Elliott have different approaches to their advocacy, all three were moved by personal experiences at White Station, including being tokenized in their Advanced Placement and honors classes and noticing disparities between the optional and traditional program.

With the Black Lives Matter movement taking even greater precedence recently, activists stress the importance of contributing to the cause with whatever resources are available.

“As of now, there is no way you can not be involved. Petitions, websites, GoFundMes, there’s so many ways to be involved, whether it’s with our active war of racism, or if it’s with politics,” Elliott said. “We have eyes, and I understand that sometimes it’s really hard to see things, and sometimes we don’t even want to see them, but the tools are right in front of us. We just have to know how to use them.”

Awareness and involvement in the fight for black lives is a road with many lanes, allowing young people a chance to explore which path to advocacy works for them. While not all actions are obvious, any steps towards ending racism are important.

“If you believe that something is worth noticing, make people pay attention the best way you know how. You don’t always have to walk on the frontlines,” Occasionally said. “All of our roles are different and unique. They require persistence and patience, so be patient with yourself when you gain the courage to fight for what you believe in and never fight alone.”

Students at White Station are surrounded by black excellence, whether it be their peers, teachers or alumni, so it is vital that students step up in the fight for black lives.

“You’re already a part of the movement, it’s just time for you to move,” Elliot said.