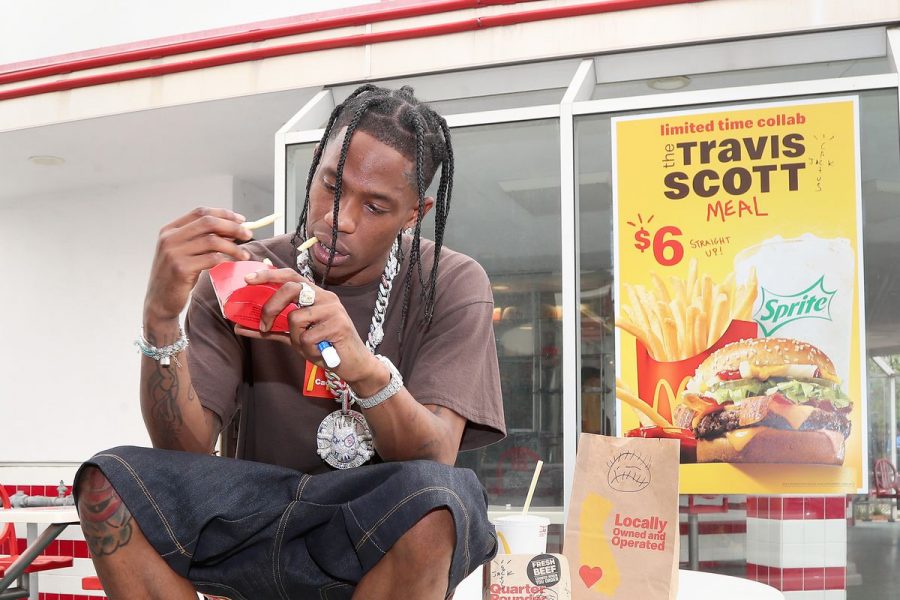 Travis Scott celebrates the launch of the meal at a McDonald’s in Downey, CA on Sept. 8. McDonald’s reported widespread supply shortages due to high demand within the first week of the burger’s release.

In the sphere of American youth culture, few individuals have quite the notoriety as Travis Scott and Charli D’Amelio. By collaborating with these prominent stars to create signature meals, fast food chains McDonald’s and Dunkin’Donuts have jump-started viral marketing campaigns.

Travis Scott, a six-time Grammy Award nominee, is no stranger to branding deals, having collaborated with Nike, Fortnite, Reese’s Puffs and a multitude of other companies. However, his partnership with McDonald’s launches him further into the mainstream and serves as a way to connect with a wider audience.

“I’ve seen it on Snapchat and all the other social media platforms that I have,” Henry Smothers (10) said. “It really blew up and it was an entire trend.”

The meal itself isn’t the main attraction for buyers; the magnitude of Travis Scott’s influence is what is driving many customers to purchase the combo. It consists of a Quarter Pounder with cheese, bacon and lettuce combined with a Sprite, fries and side of BBQ sauce.

“It isn’t anything special at all,” Smothers said.

Scott also released a line of merchandise under the umbrella of the collaboration. With everything from a Chicken McNugget body pillow to a signature McDonald’s jersey, fans have been quick to snag the branded content. Much of his merchandise has been bought out and resold on websites like eBay and StockX.

“Having Travis Scott’s name associated with the brand will help bring popularity back to McDonald’s,” Nathaniel Taylor (11) said.

In the world of TikTok, social media star Charli D’Amelio holds the title as the number-one most popular artist on the platform. Her meteoric rise to stardom netted her over 87 million followers on TikTok and 4 million dollars in earnings from merchandising and sponsorship deals. Most recently, she struck a deal with Dunkin’ for a signature beverage, officially known as “The Charli.”

“They did a really good job of targeting teenagers and anyone who uses TikTok because Charli D’Amelio is super popular and she has a really big fan base,” Emmett Campbell (12) said. “The more people that tried it and reviewed it online, the more it has continued to stir up hype for the drink.”

The drink, a cold brew coffee with milk and caramel, launched for a limited time only on Sept. 2. Although some felt the drink was too sweet, it was met with positive reviews overall.

“It really does have a nice cold brew type taste,” Campbell said. “The caramel kind of gets lost in the cold brew, so it just ends up tasting pretty sugary. I don’t know what Dunkin’ does, but it really does seem like every drink of theirs tastes a little bit different.”

“The Charli” is a part of a larger marketing push by Dunkin’ across their multiple social media platforms. They released an Instagram filter, created an original TikTok song and gave D’Amelio the opportunity to be a guest host on Dunkin’s Snapchat.

“I definitely do think this was extremely effective for Dunkin’,” Nanditha Ramesh (12) said. “Charli is an extremely popular creator and this has outreach to millions of her fans and is giving Dunkin’ major business!”