Shiberou climbs to the top 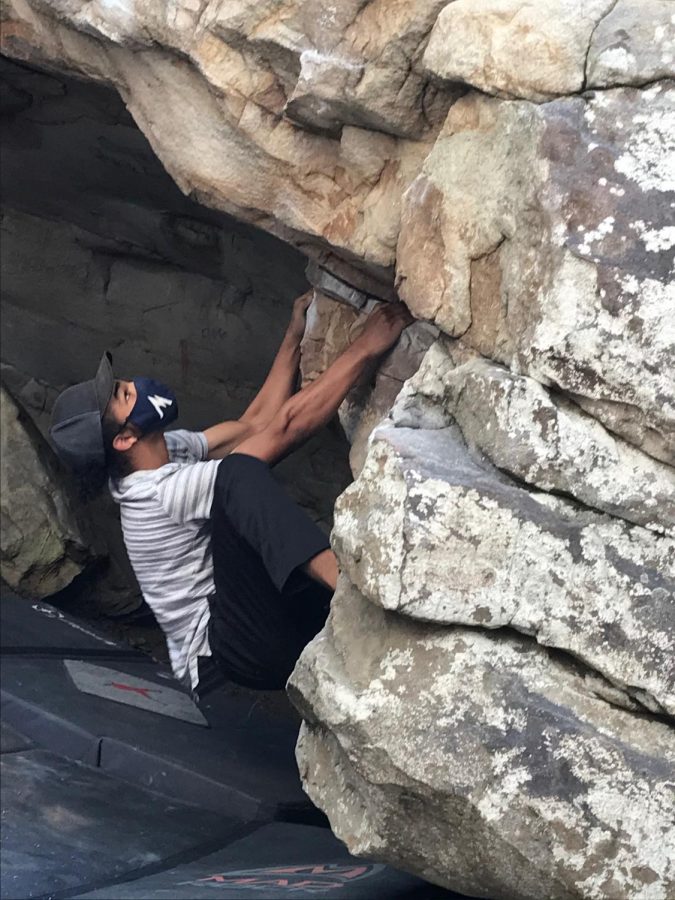 Sam Shiberou (10) holds his grip on a boulder as he figures out his next move. Shiberou climbs year round for the Memphis Rox Soul Senders as he is part of their bouldering, top rope and summit team.

Sam Shiberou (10) just keeps reaching out, whether it be for his next handhold or to become better than he was yesterday. For the past three years, Shiberou has competitively rock climbed for the Memphis Rox team, the Soul Senders.

In competitive rock climbing, there are two seasons: bouldering and top rope. In bouldering season, climbers ascend close to a 10- foot wall without gear. In contrast, top rope season requires climbers to climb an 80-foot wall while being belayed—the exertion of tension on a climbing rope by someone on the ground, usually a judge, so that the climber can not fall very far.  Though the climbing offseason is during the summer, Shiberou continues to climb on a less competitive summit team. Rather than ascending walls inside, summit season involves clambering up a real mountain. To remain in peak physical condition for the different seasons, Shiberou trains frequently and in a variety of different ways.

“We do… a warmup just to get your body in motion,” Shiberou said. “And then what ends up happening is we usually do a pyramid, so we’ll start at the easiest level of climbing and then work our way up to our maximum ability, and after that, we’ll work our way back down to the easiest level… And then after practice, we do physical workouts, ab workouts, pullups, stuff of that nature.”

At competitions, climbers have three hours to climb, after which they turn in a scorecard. Climbers’ scores depend on their three hardest climbs—the harder the climb, the more points awarded. The goal is to complete the hardest climbs in as few tries as possible since ties are broken by giving the advantage to the climber with fewer attempts.

“The reason why it’s the top three that you climbed is because if a person just came in, they could just climb like 20 easy routes and then still be as good as the person who just climbed some really hard ones,” Shiberou said.

Although Shiberou is only in his third year, he has already accumulated numerous top 10 finishes, including one first-place finish and three top-ten finishes. Awards are not everything, though, as  personal growth enriches Shiberou’s climbing experience the most.

“…Watching myself grow through these years has just been really inspiring, from the skill level that I started out with and the skill that I’m at now,” Shiberou said. “It’s really something that I can look back on and just be really proud of myself for.”

As climbing has provided an outlet for competition and self-improvement, Shiberou has been moved by the sport.

“It’s given me more of an appreciation of the outdoors and really just a respect for the sport,” Shiberou said. “…It takes skill, it takes strength, it’s just really inspiring.”

Currently, competitive rock climbing does not attract a large following in Memphis, a change that Shiberou hopes will occur soon because of the impact it has had on his life.

“I wish that the community were larger,” said Shiberou. “I just really wish that… people were more educated about it because I definitely feel like more people would be interested in it.”