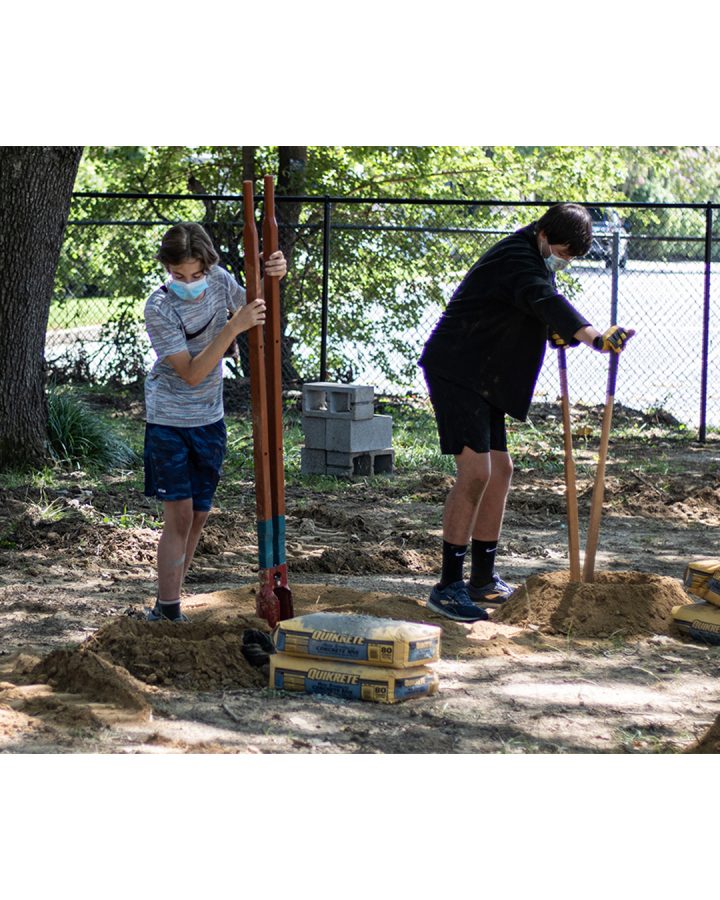 Axel Miller (9) and Jordan Kirby (9) dig holes in preparation for wooden posts for an obstacle. Over the course of five days, volunteers came and helped construct the Jerry Hiemer JROTC Leadership Course at WSHS.

In the face of a global health crisis and an increasing number of COVID cases, many organizations around the world have had to cancel events. However, one student refused to let COVID-19 thwart his plans. And although no students are on campus to witness the achievement of his mission, the magnitude of 2nd Lieutenant Chris Phebus’s (12) accomplishment is no less impressive.

“…He did everything from start to finish,” JROTC instructor Sergeant Major (SGM) Karen Bolden, said. “Of course, it isn’t finished yet, but when I say start to finish, I mean all the planning, contacting key people in the community, putting in for the grant. Those are things that you would expect a high-level executive to do, and he did that.”

After returning in early November from the 2019 National Raider Competition, Raider commander Phebus knew that something needed to change: the WSHS Raider team needed an extra push in their training to prepare for next year’s contests. The National Raiders Competition consists of a 5k run, a one mile cross country rescue run, a river crossing, the “Gauntlet” (a smaller obstacle course) and a three-quarter mile obstacle course with 50 lb crates and 40 lb rucksacks. While some might have simply assigned more strength training or running during practice, Phebus took the challenge a step further.

“Chris, he originally came to me with the idea of creating an obstacle course. He had a passion for not only for being a part of the Raider team but taking command of it…” JROTC instructor Sergeant First Class (SFC) Barry Page said. “He was like ‘Sergeant Page, what do you think about the idea if we built our own obstacle course, and even further, not just to work out on it, but maybe even host competitions here in Memphis.’ And so I was like ‘Chris, that sounds like a great idea, but that sounds like something between a hope and a prayer, so I’m not sure how far you’re going to get with that.’”

Although the planning and approval process raised more questions than solutions, Phebus persevered. To strengthen the likelihood of his proposal, Phebus began to research the endeavor.

“The first step was talking to other schools and seeing what they had, what they wanted, ways they would’ve preferred to do things,” Phebus said.

“When I took the project, Chris had put together a proposal that had descriptions and… photographs of all of the obstacles and also a spreadsheet of material needed,” Poplos said. “…It was probably about 80% complete when I got handed the project…”

With a plan clearly in mind, Phebus moved on to funding. He applied for the annual Nike Community Impact Fund, which awards up to $10,000 for youth athletic activities, and was awarded the full grant. In addition, the course was financially supported by the Assisi Foundation, the SCS School Board Member William “Billy” Orgel and other groups to make the course a reality.

“I think it’s great for the students, male or female, who are interested in careers in the military. It gives them a taste of what it’s going to be like in training,” Orgel said.

Phebus then purchased supplies and began the construction process. This stage of Phebus’ plan proved to be the most difficult because of the coronavirus pandemic.

“Our original plan was to have the National Guard construct the course, but they couldn’t because COVID canceled their summer training,” Phebus said.

Instead, Phebus enlisted his fellow students to help build the course. From Aug. 17-21, students volunteered to become a part of WSHS history. More than a dozen answered the call, including Cadet Captain Alexandra Shirley (10).

“So we were building all of the obstacles. On the first day, we helped cut and transfer wood. We dug out holes in the ground for the posts, and then we filled the holes. We put the wooden posts in and filled them with cement. And then on the second day, we wet the cement and let it set, and then we started building the individual components of the obstacles…” Shirley said.

While Phebus was establishing his legacy on White Station, he wanted to honor another WSHS student.

Specialist 4 Jerry Hiemer fought in the Battle of Ia Drang, a conflict from Nov. 14-18, 1965, in which the North Vietnamese outnumbered US and South Vietnamese soldiers 2:1. For providing cover fire so the rest of his team could return to their platoon, Hiemer was awarded the Purple Heart. Hiemer died in combat on Nov. 17, 1965. Phebus hopes that the course will be complete by November so the course’s opening ceremony can be held on the same date.

All that remains to finish the course is some safety measures for certain obstacles. Not only do these obstacles and the course in general offer a significant opportunity for the WSHS Raider team, but also for the JROTC program of WSHS and other Shelby County schools.

“The goals of the course… number one, grow the White Station JROTC program…” Phebus said. “Our secondary goal is to grow all units across Shelby County… Our third objective is to see stronger, both physically and mentally, stronger leaders in the community coming out of JROTC and high school in general across Shelby County and through that build up the community as a whole to a greater level of physical endurance, mental fortitude and tolerance.”

Even before the course was completed, it accomplished its first objective. Many of the volunteers were not initially enrolled in the JROTC program but decided to switch their schedules at the end of the week.

“With all the people around me, I felt inspired to join the ROTC class,” volunteer Jordan Kirby (9) said.

With such a promising start, there is little doubt that the obstacle course will be able to meet and exceed its goals.