Student voters use their voices this election year 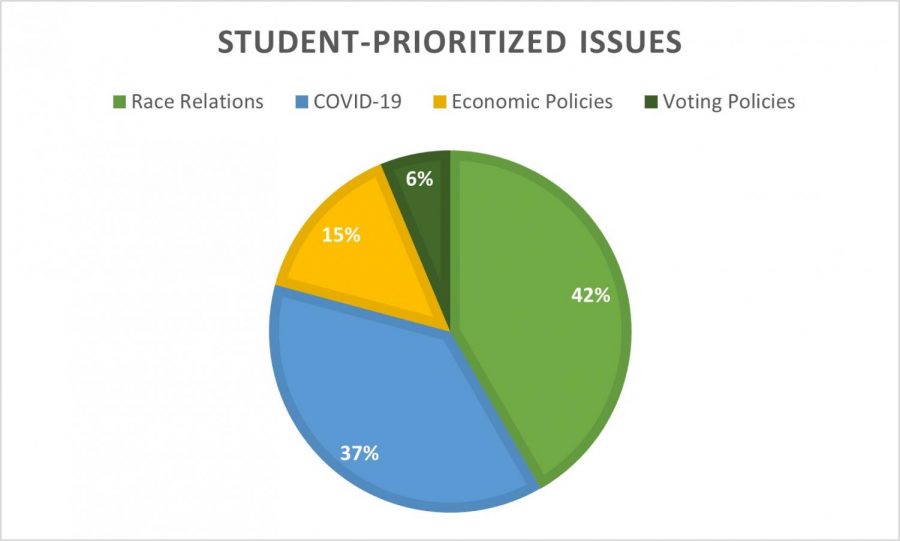 From poll data via the Scroll’s Instagram, the majority of students have agreed that racial tensions are the primary concern this election. As the election approaches, student voters continue to consider a variety of topics, including COVID-19; this is the first year that coronavirus will play a role in a presidential race.

Young voters are the future of the United States, but how will their opinions influence this election year? 350,000 people under the age of 25 voted in the 2016 election, but that number is expected to increase this year. For students, COVID-19, race relations and voting policies are some of the most pressing issues.

“I think that it is very important for teenagers to get involved in politics because we will determine the future of America,” Vance Gieselmann (12) said. “As cliche as it sounds, it’s true.”

Chris Phebus (12) hopes to vote for someone whose ideologies coincide with his own.

“I prioritize the beliefs and character of the candidate,” Phebus said. “Are they honest? Have they done what they said they would do? Does what they want to do align with what I think should be done?”

Generation-Z and millennials alike have shown a clear left trend towards opinions regarding social justice and tolerance, with 41% of people between the ages of 18 and 34 likely to vote for liberal candidates, according to the 2020 registered voter data.

“With the majority of the younger generation being liberal, I would think [our nation is headed] more to the left, more legislation on climate change, race relations, etc, but it might take a long time because so few younger people who are eligible to vote are participating in government,” Maddie Hitching (12) said.

Because her senior volleyball season was cancelled due to the coronavirus, Gieselmann is concerned about the COVID-19 pandemic, as well as the increased tensions between political parties.

“I see a huge divide in our country that seems to get bigger and bigger between the right side and the left side,” Gieselmann said. “To be honest, I do not know which side will win in this election, but either way, I think the conflict and division in our country will continue to increase.”

With the rise of the Black Lives Matter movement, there has been an increase in racial tensions from talks about police brutality, Black oppression and White privilege. With this movement comes protesting, sometimes turning to rioting, which is an issue on the forefront of many voters’ minds.

“I am concerned over the violence and failure of the rule of law in cities with riots,” Phebus said. “If the next president cannot end these in some way, there could be greater unrest and possibly a civil war, though that is an extreme. The next president must settle the current unrest and ensure the nation can still function under new COVID guidelines.”

Though they may have strong opinions, some choose not to be outspoken about their political beliefs. Gieselmann may not post about politics online, but she still chooses to use her voice and speak out.

“I am not afraid to speak my mind on political matters,” Gieselmann said. “I am concerned and interested in politics, but I am not active in any organizations.”

“… I share information about political topics and educate myself about how the government works, but I don’t participate in politically active groups,” Hitching said.

Though these students may disagree about candidates, stances and parties, they all agree that registering to vote is important. Using one’s vote to project one’s voice is a critical tool, especially for this younger generation.