Why Cancel Culture is Socially Beneficial 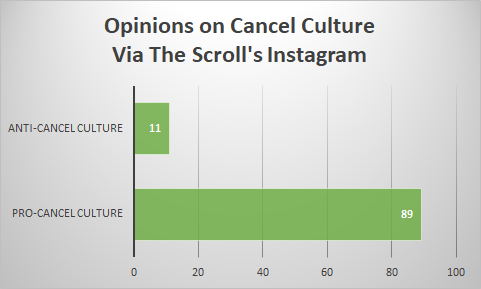 In a poll released on The Scroll’s Instagram, data was collected from White Station students about their opinions on cancel culture. With the majority against cancel culture, debate-sparking beliefs are few and far between.

You can cancel credit cards, gym memberships and hotel rooms. Now, you can cancel people. When something is cancelled, it is discarded, rescinded, revoked. Finished. This same principle applies to so-called “cancel culture,” in which the public will stop supporting a person who has done something deemed socially unacceptable, and the accused is required to repent publicly to have their reputation remain intact.

“People can be cancelled for their political views, religion, or something as simple as the clothes they wear or who they are seen with,” Matthew Kim (11) said.

Social media has propelled cancel culture into high gear as everyday people call out offensive actions from celebrities and others. Threads upon threads of claims on Twitter against influencers and celebrities roll in instantly through social media access. Social media has ushered in a new age of knowledge on the words and actions of thousands of people around us, and backlash from the public is one way that people are held accountable for their words and actions.

Cancel culture has benefited the public in many ways. When public platforms learn of a person’s socially unacceptable words or actions, such as sexual harassment or racist comments, the accused has no option other than to publicly apologize. In the 2017 #metoo movement, thousands of women, and some men, spoke up about the harassment they had been subjugated to by those in the workplace. Confronters were given a place to speak their mind, as well as given support from others placed in similar situations. Additionally, those accused were exposed, their actions given light and investigation.

“I believe it can be helpful to expose certain people and cancel them when what they are doing is harming a group of people, and when they need to be held accountable for their actions,” Flannery Lemmonds (9) said.

Cancel culture has been extremely effective in battling social injustices, but what comes next for a cancelled celebrity? When someone has been righteously cancelled, true redemption and reinstatement of full support is rarely earned. Some choose to apologize, but these apologies are often half-hearted and done solely out of social obligation.

“After being cancelled, celebrities almost immediately come out with an apology video, or ‘take time for themselves’ in which they take a break from social media,” Lucy Pollard (11) said. “I feel like there eventually is redemption but it takes time.”

Within those in support of cancel culture, a debate ensues of whether or not cancellation is personal. Some say that cancel culture is personal and consequences can vary situationally. However, others, like Lemmonds, disagree.

“I do not believe cancelling is personal. I believe anyone can be cancelled if they do something to deserve it,” Lemmonds said. “Especially if you’re a celebrity, because you’re always in the public eye so much that if you do something wrong there will always be people who will not tolerate it, even if they’re your fans.”