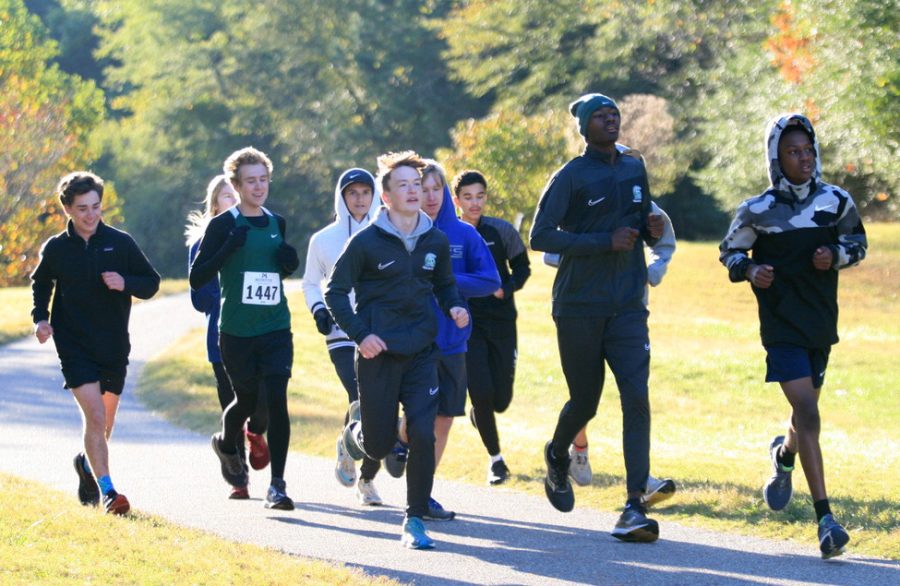 For the final meet of the season, the boys’ team stretches their legs with a brief jog around a loop. Runners are required to keep their masks on at all times except when they are warming up or running the modified course.

Under the supervision of Memphis Youth Athletics (MYA), the cross country team found the opportunity to continue competing under a new name: the Spartan Running Club. Despite Shelby County Schools’ decision to postpone all fall sports, club members have practiced among themselves and competed against opponents from various schools on Saturdays at Shelby Farms.

MYA thoroughly developed safety precautions, such as a new course, mask mandates and spectator limits, in order to eliminate unnecessary risks to student-athletes.

“MYA has done an outstanding job,” coach Ernie Shadow said. “They filed an 18-page report with the Shelby County Health Department that was approved, and they have it open to review for all parents and runners who are willing to read it and feel safe.”

Meets organized by MYA allowed runners to showcase their combination of summer conditioning, determination and endurance through their completion of 5K races.

“The goal was to have five girls under 24 minutes… for the first meet, and we got it,” captain Zoe Wolfe (12) said. “We did so much better in training, and we ran so much better than we anticipated.”

Despite the regulation of social distancing, the team maintained close-knit bonds and developed friendships with new teammates.

“Since we ran together every day, we got to know each other a lot better pretty quickly,” Gabrielle Shirley (9) said. “All of the girls are really sweet, and they were very open to having me on the team… Most of them were interested in getting to know me since we can still talk with a mask on.”

In Shadow’s eight years of overseeing cross country, this unparalleled season stands out due to the challenges of COVID-19 that the team overcame as they found strength through working together.

“Just making the best out of adversity… I think that’s the most memorable thing—that we were able to have the fastest team possible despite all of the adversities we went through,” Shadow said. “No one gave up.”

The loss of the opportunity to compete in the state championships because of their club status failed to deter students from reaching their aspirations, some of which had been in the making for over four years.

“I just wanted to go out strong my senior year,” captain Darryl Higgins (12) said. “I’ve been battling injuries my whole high school career. My freshman year was the last time I had a completely injury-free season… This year I’m battling through it a lot better… previously I hadn’t [set a personal record (PR)] since sophomore year, but I ran an 18:20 last week, [setting a new PR].”

And for new coach AJ Wolfe, though his first season was an atypical experience, it has left a profound impression on him.

“The season is not what we had hoped for it to be… so we’re just really grateful for the opportunity to be able to run at all,” coach AJ Wolfe said. “The most rewarding thing for me coming out of this year was just getting to know these kids—and that’s really cliche—but the athletes that I got to meet have really been a delight. They’re smart kids; they’re kind, nice and fun to be around. Competing is all well and good, but for me, it’s just as important to foster a lifelong love of running and promote a healthy lifestyle.”