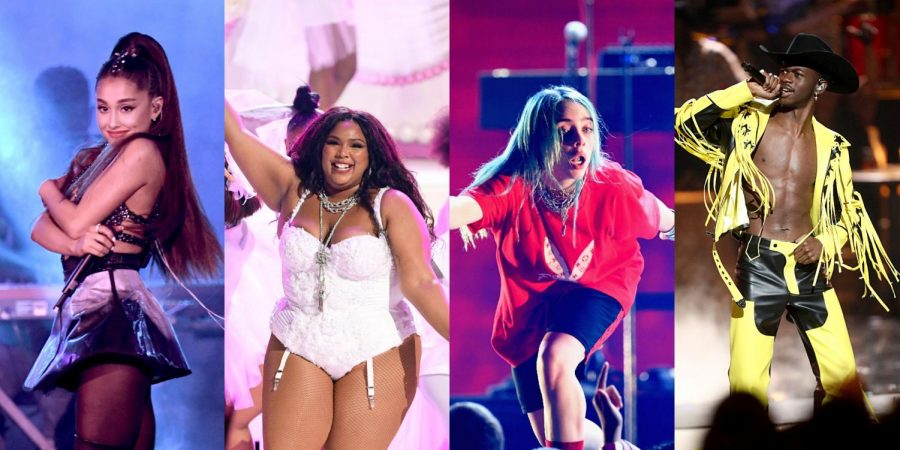 (Left to right) Ariana Grande, Lizzo, Billie Eilish, and Lil Nas X, and countless other celebrities meet for “the biggest night in music,” the Grammys. Billie Eilish, Lizzo, and The Chemical Brothers were among some of the top award winners of the night.

Commonly known as “the biggest night in music” to some artists, the Grammys held their 62nd annual award ceremony on January 26th despite the controversy surrounding the event.  People questioned the Recording Academy and the voting process as a whole when former president Deborah Dugan made allegations that, among other things, the process of voting for the awards was badly flawed. On top of that, NBA star Kobe Bryant and his daughter Gigi passed away just hours before the event.

Alicia Keys returned to host the 2020 Grammys and started the show with a tribute to Kobe by saying “we’re all feeling crazy sadness right now… standing here in the house that Kobe Bryant built.” Keys and Boyz II Men paid tribute to Bryant by performing “It’s So Hard to Say Goodbye to Yesterday” while a spotlight highlighted Bryant’s #8 and #24 jerseys.

It was a showdown between the top breakout artists of the year, Lizzo, Lil Nas X, and Billie Eilish. Although Lizzo had the most nominations, the crown went to Billie Eilish, who seemed to win everything she was nominated for. 18-year-old Billie Eilish has claimed the top charts of music since her career launched in 2018. Eilish was thankful, and a little overwhelmed at all the awards she received. However, she did tell audiences that she thought Ariana Grande’s “Thank You, Next” should’ve won best album because it has “gotten her through some [stuff].”

Memorable performances were made by Tyler the Creator, Rosalía, and Lizzo, while Billie Eilish, Camila Cabello, and Demi Lovato performed heart-wrenching renditions of their popular songs. It was a night of thoughtful tributes to Kobe Bryant and Nipsey Hussle while still having celebratory and congratulatory vibes.