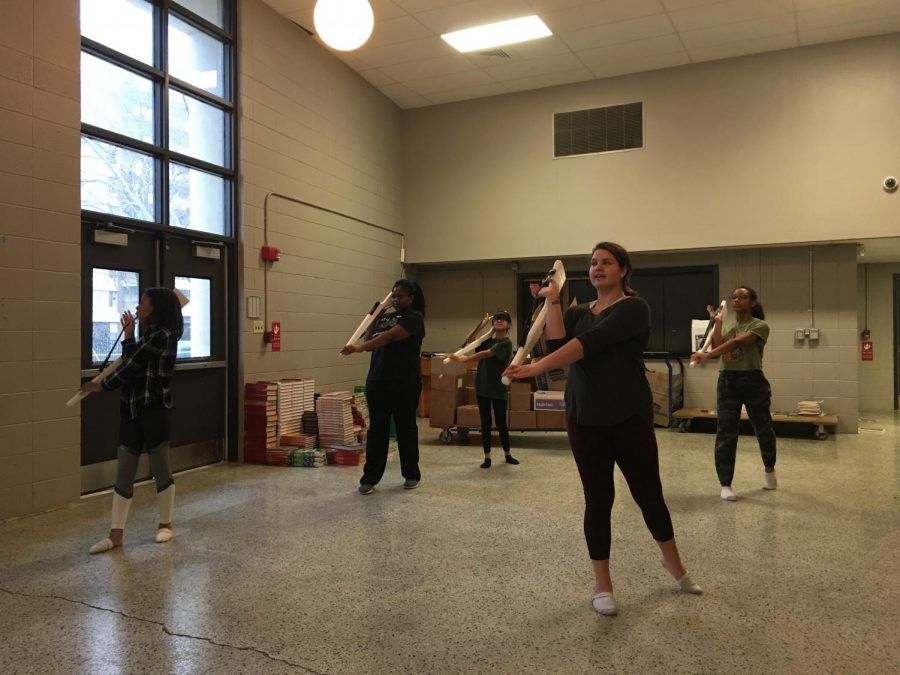 The White Station winter guard learns a new rifle toss in preparation for the upcoming competitive season. The team has been active since 2018.

The debut of the Spartan color guard last fall is a spectacle that took many by surprise, as this auxiliary performance had been unheard of at White Station for years. What many people don’t know is that the sport is not just limited to accenting the band during marching season—in the winter, the guard performs as a single entity in a competitive sport called winter guard.

“[In] color guard you’re more focused on embellishing and accenting the marching band, whereas in winter guard… it’s focused on just the guard and what skillset they can provide during a competition or performance,” winter guard coach Chloe Zielger said. Ziegler is an undergrad student at the University of Memphis and has been coaching the team since 2018.

Like color guard, winter guard is a sport that incorporates dance and equipment to create a performance of precision and elegance. Dance styles range from ballet to jazz to hip hop, and common pieces of equipment include flag, rifle and sabre, which performers spin and toss for added effect. Depending on the theme of the performance, guards may also use set pieces and props during their show. A winter guard performance can take on all kinds of moods, themes, genres and choreography styles—the possibilities are endless.

Being White Station’s newest sport, many members are beginners and are learning the sport from scratch, bringing on an onslaught of unfamiliar challenges.

Despite the obstacles, the guard has high hopes for the oncoming competitive season.

“Right now, we’re obviously growing as a team and we have these new people. It’s a new start, a new beginning. Everyone is excited… I just want to see us grow physically and mentally throughout the whole thing,” guard member Sydney Scott (9) said.