“F In Detention” promises to make an “A” 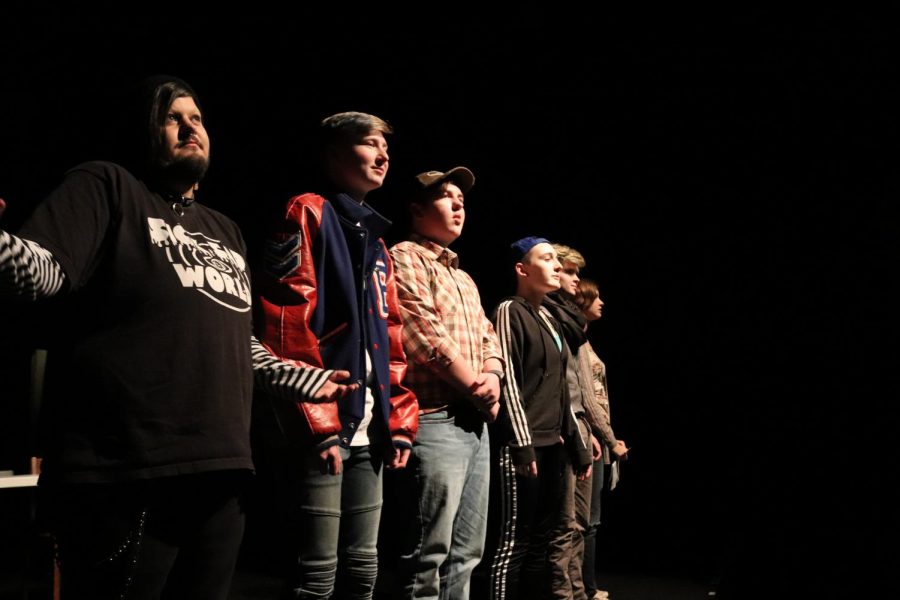 Standing in a line of solidarity and defiance, the six characters of Q&A’s “F in Detention” mimic the final monologue in “The Breakfast Club”, in which youth call out their superiors for stereotyping them. “F in Detention” sought to solve conflict between intersectionally queer characters and start conversations about LGBTQ+ experiences in school, all while entertaining local audiences.

“The Breakfast Club, but make it gay”— that’s the premise of queer theatre troupe Q&A’s new show, “F in Detention: Tales of a High School Queer.”  The play, collaboratively written by LGBTQ+ and allied youth, follows a group of six characters, representative of queer stereotypes, through their journey of expression and acceptance in detention.

Started back in 2014 at Playhouse on the Square by former director Carly Crawford, Q&A has had four previous original shows, all focusing around some central theme in the lives of queer youth. Now run by director Atam Woodruff, this year’s theme is school.

“We were talking about especially trans students feeling like they weren’t being heard at schools, being called by the wrong name, the wrong pronoun, just kind of getting made fun of for the life they lead,” Woodruff said. “I was like, we need to talk about this.”

Spartans Evvia Townley-Bakewell (12) and Maggie Dearmore (11) joined Q&A to spend more time with friends, and both helped create the show’s characters and plot.

“You have the lesbian athlete, the musical theatre gay, the bisexual cheerleader, a kid who has gay dads and was bullied. We tried to have some intersectionality because not all queer experiences are universal,” Townley-Bakewell said.

“F in Detention” seeks to pull audiences out of their comfort zones, breaking barriers between characters much like its inspiration, “The Breakfast Club.”

“The message we’re trying to get across is that these characters, even though they do fit pretty clearly in the boxes we’ve put them in, they have a variety of labels that can be applied to them,” Dearmore said. “Just because labels do apply to them doesn’t mean that they should be. Just because you fit in a label doesn’t mean that that’s the only thing that defines you.”

Although Q&A is about production, its main focus is creating a safe space for queer and allied youth.

“A lot of the times when people are in theatre, it’s just about the show and putting on the best production… here it’s not always about that. It’s about expressing yourself, it’s about telling your story and about being around people that understand you,” Woodruff said.

Don’t miss “F in Detention” on the Evergreen Stage, March 6-8.