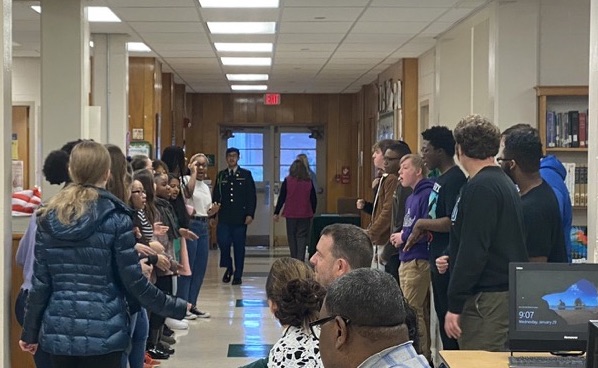 On Jan. 29, DoReHe and Key of She performed in celebration of Billy Orgel, the District 8 Board of Education representative for White Station. Most of the songs they have used in previous performances, such as this one, will be featured on the CD.

Since the end of the 2019 school year, the White Station Chorale, acapella groups DoReHe and Key of She have been producing a CD as the culmination of their year, but the process hasn’t been just full of matching pitches, singing songs and making beats.

The idea of a CD stemmed from the need to satisfy multiple purposes, such as boosting publicity and preserving memories.

“It’s always good to have some concrete product to do one of two things: one thing is [to] publicize ourselves so send it out to… stakeholders in the program, former students [and] former directors,” choir teacher Joseph Powell said. “The other thing is to… have something to remember the year by… those things will live on; they’ll be kind of immortalized in digital form.”

Due to the immense cost, creating a CD is a special project that hasn’t been done since four years ago; however, the impact of the CD is greater than the cost.

“I think the choir CD is really to hold on to the wonderful music we’ve made this year,” DoReHe member Ryan Mesler (10) said. “With the amount of effort we’ve put into it, it really means a lot to be able to hold on to it.”

“For the big group, chorale, we will hire an engineer, and he’ll… take all of those raw takes and put them all together,” Powell said. “For the smaller groups, though, the process is more like I’ll do… what’s called tracking, and we’ll send the finished tracks to be mastered and mixed by another professional engineer.”

A few featured songs include “Soon-ah Will Be Done” performed by the chorale, “Hurt” by DoReHe and “Love on the Brain” by Key of She. The performers are passionate about the choices as they get to showcase their skills physically and digitally.

“My favorite part has been the music,” Mesler said. “I love each song and supporting my part has really been a blast.”

Because the choir CD is personal to the choir students, Powell has left the naming and design up to them.

“We’ll probably pull out a lyric from a song and call [the CD] that… and get one of our students to design [the cover],” Powell said.