Trump’s acquittal: what it means for the rest of his presidency and beyond 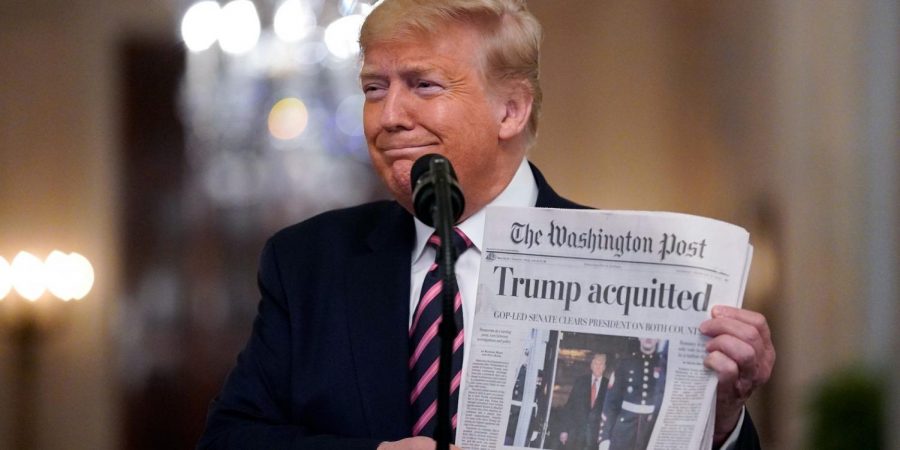 President Trump's impeachment trial passed through multiple committees in the House of Representatives before reaching the Senate. While an impeachment can pass in the House, in order for a sitting president to be removed from office, a two-thirds majority must be reached in the Senate as well.

On Feb. 5, President Trump was acquitted by the Senate of charges of abuse of power from the House of Representatives, meaning he will not be removed from office before his current presidential term is over. This continues a historical pattern as no sitting president has ever been removed from office. Trump is now the fourth US President to face impeachment charges and the third to be acquitted by the Senate.

In the Senate, 52 senators voted that the charges brought against Trump in the House did not call for his removal from office. The decision was made almost completely along party lines, except for Sen. Mitt Romney, a Republican Senator from Utah, who disagreed with the vast majority of his party.

“The grave question the Constitution tasks senators to answer is whether the president committed an act so extreme and egregious that it rises to the level of a ‘high crime and misdemeanor… Yes, he did,” Romney said in an emotional floor speech to the Senate.

Regardless of the result, the clear division between Democrats and Republicans on such a high-profile case marks a time of hyperpartisanship in America. Furthermore, Trump’s acquittal is seen by many as a sign of his political strength; this, in turn, could have a positive impact on Trump’s chances of reelection.

The implications Trump’s acquittal has for the Democratic party are yet to be seen as Democratic primaries continue. Speaker of the House Nancy Pelosi took a calculated risk in bringing official Articles of Impeachment against the president, and whether or not it paid off could be reflected in the upcoming 2020 Presidential Election.