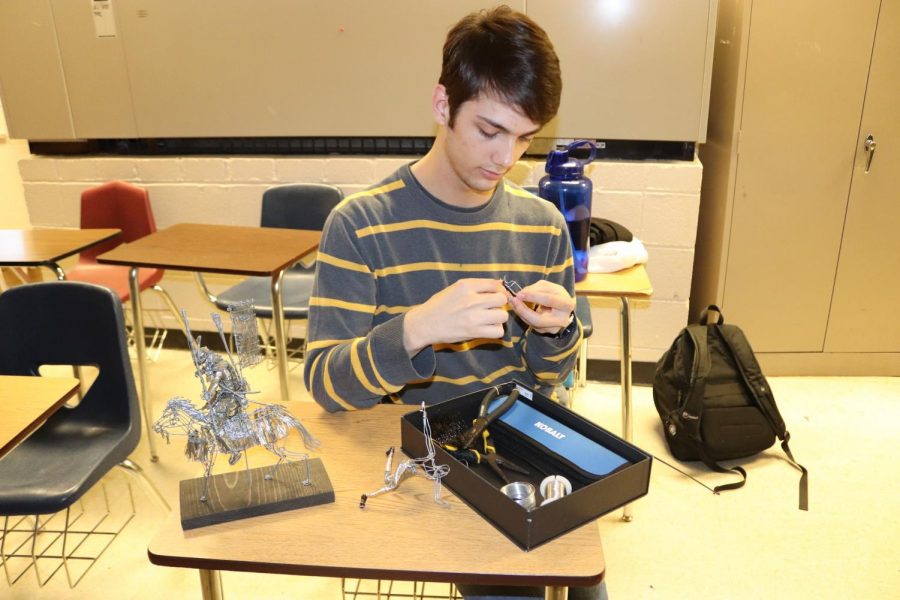 Ben Erickson(12) takes out his equipment in class to work on his latest sculpture. His wire art creations have become recognized by Spartans for their incredible detail and precision.

When walking past so many faces in the halls, one would never expect such creative potential from a fellow student. Ben Erickson (12), however, has garnered attention from classmates and teachers for his refined wire art sculptures.

“My first impression of his work was that whoever made it is beyond devoted to what they do,”  Skylar Scarlett (12) said. “I also was… awe-stricken with how complex the piece of art was, yet still being a simple concept such as a dragon or a temple.”

Starting with just a spool of steel wire, Erickson twists and bends the wire to create intricate sculptures of varying inspirations from video game characters to Aztec culture.

By the beginning of his junior year, his skill level had grown considerably along with the popularity. Erickson sold most of his pieces in his junior year for $100 each and eventually began to take commissions. Currently, three of his creations are on display in White Station’s Japanese classroom.

“Every day when he came to my class, he always had something with him, whether it was something he was drawing or something that he was making by hand. So I caught on pretty quickly to his interest in art,” Japanese teacher Dylan Lira said.