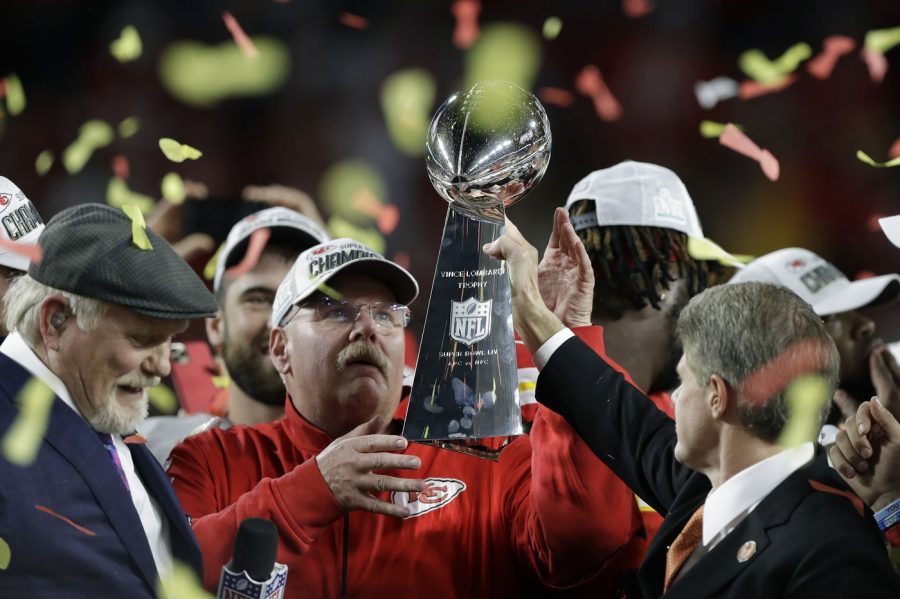 For 100 seasons now, the NFL has entertained millions of fans in season and into the playoffs. This postseason did not disappoint as fans witnessed a jump pass by a running back, a dynasty dethroned and a Super Bowl comeback win.

Once again, Wild Card Weekend set the stage for an exciting playoff. Each game was wild indeed, and the Houston Texans was the only home team to escape with a win, despite trailing the Buffalo Bills by 16. The New Orleans Saints fell to the Minnesota Vikings in overtime, and the Seattle Seahawks defeated the Philadelphia Eagles. In Foxborough, the Tennessee Titans stunned the reigning champions, the New England Patriots, behind a 204-yard performance by Derrick Henry, despite being given only a 29 percent chance to win.

The winners of Wild Card Weekend hoped to keep their Super Bowl hopes alive in the Divisional round. Each winner from the previous week faced a well-rested one or two seed team that had earned a first-round bye. In San Francisco, the number one seed 49ers took care of the Minnesota Vikings 27-10. The number two seed Green Bay Packers held off a late rally to defeat the Seattle Seahawks 28-23. In the AFC, though, things were a little more complicated. The number two seed Kansas City Chiefs quickly fell behind the Houston Texans 24-0 but then scored 41 straight points en route to a 51-31 win. As Fox commentator and Hall of Fame quarterback Troy Aikman put it, “It went from a blowout, to a close game, to a blowout on the other end.” The sixth seed Tennessee Titans were the lone Wild Card team to advance to championship weekend after upsetting the one seed Baltimore Ravens, 28-12.

After a win in the Divisional round, the four remaining teams hoped to secure a conference title. The Tennessee Titans traveled to Kansas City to face the Chiefs in the AFC, and the Green Bay Packers arrived in San Francisco to play the 49ers in the NFC. In Kansas City, the Titans jumped out to an early 17-7 lead and looked like they would continue their improbable run through the postseason. However, Chiefs’ quarterback Patrick Mahomes took the game into his own hands. Mahomes led a 28-0 run and put the game away when he connected with Sammy Watkins on a 60-yard touchdown catch, winning 35-24. With that AFC Championship win, the Chiefs advanced to their first Super Bowl since Super Bowl IV. In San Francisco, the 49ers jumped to a 27-0 lead by halftime with three touchdowns by running back Raheem Mostert. The Packers closed the gap to 34-20 in the fourth quarter, but a field goal by 49ers’ kicker Robbie Gould with 3:31 remaining sealed the game as the 49ers went on to win 37-20. Not only did the 49ers total 285 rushing yards, but they also forced three turnovers. The 49ers advanced to the Super Bowl after completing a turnaround from a 4-12 season in 2018 to one of 15-3 in 2019.

Arguably the most prolific offense met the most impenetrable defense at Hard Rock Stadium in Miami. In what many expected to be a high scoring game, ESPN gave Kansas City a 66 percent chance to win. But after the first half, it was 10-10, and neither team showed the offensive prowess evident in the regular season. The 49ers pulled ahead 20-10 towards the end of the third quarter and then picked off quarterback Patrick Mahomes for the second time with 12 minutes remaining in the game. In a potential put-away drive, the Chiefs defense stopped the 49ers and gave the ball back to Mahomes and the offense. In a quick, clinical drive, highlighted by a 45-yard completion from Mahomes to wide receiver Tyreek Hill, the Chiefs scored a touchdown to make it 20-17 with six minutes remaining. Another stop by the Chiefs’ defense gave the ball back to the offense, who then looked to score the go-ahead touchdown. With two minutes remaining, Patrick Mahomes found running back Damien Williams for a five-yard touchdown, giving the Chiefs a 24-20 advantage. The 49ers could not come through in the clutch as Chiefs’ defensive end Frank Clark sacked quarterback Jimmy Garoppolo on a 4th and 10, giving the ball back to the Chiefs’ offense. Damien Williams then rumbled into the endzone for a 38-yard touchdown, sealing the Chiefs’ win, 31-20.

Although three times it looked as if the Chiefs would not reach or win the Super Bowl, coach Andy Reid and Patrick Mahomes found a way to bring the Lombardi Trophy back to Missouri.