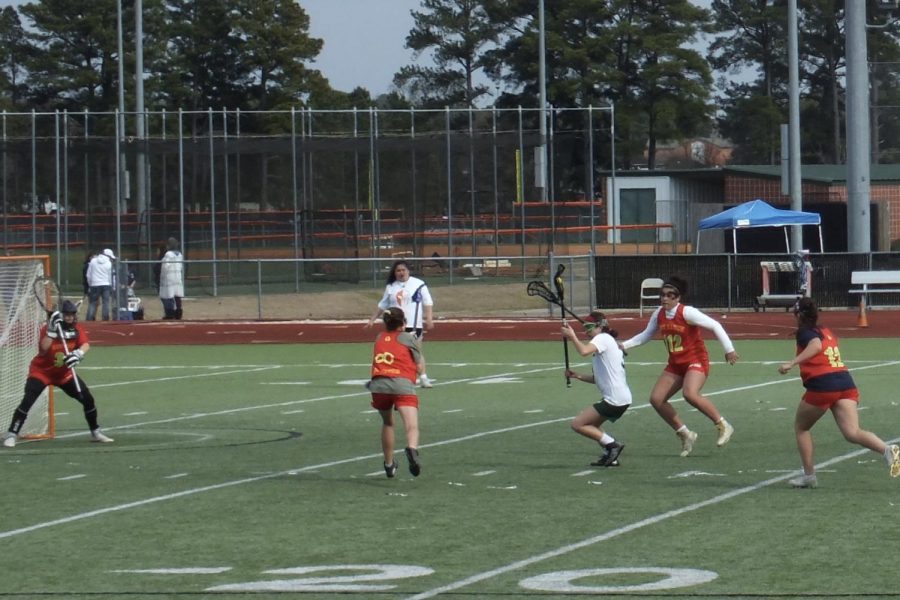 As the Houston Cayennes crash, Anya Tollefsen (12) prepares to shoot in the championship game. The Cayennes, a club team from Texas, were the only team to defeat the Spartans.

For some, the tournament was a personal experience that meant more than playing time.

“It was really fun and special to me since that was my last Little Rock [tournament],” Aja Washington (12) said. “The fact that we won most of our games and just how far we got in the tournament was really cool.”

The team played its first championship game in the history of the program. Although it resulted in a loss for the Lady Spartans, Head Coach Todd Jones still finds a positive outlook.

“The near-win is just one indicator of the progress our program is making,” Jones said. “Lady Spartan lacrosse is trending upward in every measurable category.”

“We had 12 different players score this weekend, many of which scored their first varsity level goals,” Jones said. “Cassidy Jones (10) led the team with 19 goals; Anya Tollefsen (12) followed with 11 goals and led the team in assists. Avery Rooker (12) led the defense in caused turnovers, and Hailey McLaughlin (11) was our top performer game in and game out.”

The games provided opportunities to learn that can only come from being on the field, such as how to win close games when it comes to the last possession. Various players bonded over the achievements they put under their belts.

“My favorite moment was definitely after my first goal of the season,” Delilah Hill (9) said. “It was a moment of joy, and I really felt the support from the team.”

The tournament prepared the team for the upcoming season and their next challenge: the Battle on the Greenbelt, a tournament held in Collierville.

“I’m excited to see where this season takes us,” Jones said. “I think our team has huge, as of yet, unrealized potential… It’s up to the girls to decide to beat some teams that in the past we have struggled with. Our team is good enough for sure; now they just need to take that belief onto the field and show our competition how good we are.”