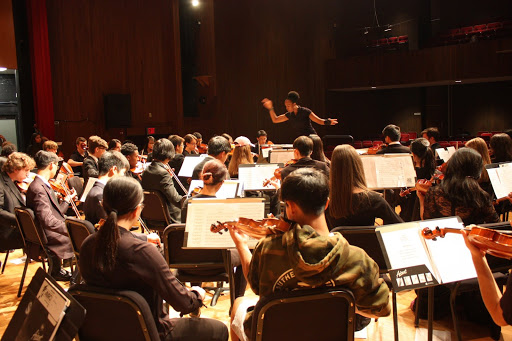 Current Memphis Youth Symphony conductor Kalena Bovell directs the orchestra with a fiery passion and ear for detail. The California native, chosen after a lengthy audition process, also holds the title of Assistant Conductor of the Memphis Symphony Orchestra.

The screeching of strings tuning and gurgle of blocked oboe air are familiar forms of the racket that permeates the room at the beginning of Memphis Youth Symphony rehearsals. Once the members buckle down and begin making music though, the whole orchestra goes through a transformation.

“We usually stick to classical music, so Baroque and Romantic [Eras]. During the holidays, we play a medley of all the holiday classics…the best song in my opinion though is ‘Sleigh Ride,’” youth symphony violinist Elaine Lee said.

Lee has been a member of the program for ten years, and when questioned about the educational aspects of the program, Lee responded, “Dr. Crust…genuinely cared about us learning from the music rather than just the notes in the page.”

Not stopping there, Lee went on to explain, “He was also closer in age to us so it was easy to talk to him and relate to him.”